Learn How to Speak Whitetail

The following bit of information may astound you, or it may just convince you that some wildlife biologists are working too many late hours trying to justify their grants. 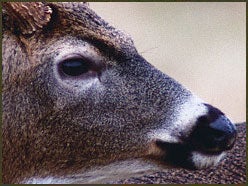 The following bit of information may astound you, or it may just convince you that some wildlife biologists are working too many late hours trying to justify their grants.

Either way, here it is: In 1988 at the University of Georgia, approximately 400 different whitetail vocalizations were identified and recorded. A few members of my hunting club don’t have that rich a vocabulary.

Since that research was published call manufacturers have been busy, and as a result, grunts, bleats and other calls are now considered necessary tactics. Making them, however, is not as simple as blowing on a tube. For example, a hunter must know the difference between a “tending grunt” and a “dominant grunt,” or he might chase off the buck he’s attempting to call. So how do you make sense of it all? Start by taking our little language course. It covers the basics and will help you get by like a tourist in Paris with a handy electronic dictionary.

Bleats
Fawns, does and bucks all use bleats during fall, but fawns make the sound more frequently than adult deer do. In the first four months of a fawn’s life, its bleat is best described as a high-pitched neeeah sound. By October, however, the fawn’s vocal cords have begun to mature and its bleat begins to resemble that of a doe or a young buck, which sounds like naaah. I’ve watched does and fawns spontaneously bleat while grazing and walking in the woods. On other occasions I’ve witnessed what appeared to be a doe or fawn using the bleat to communicate with other deer from a distance. When a buck hears this sound, he’ll often associate it with a doe group and come to check out its source. I use the bleat in several different ways.

If the action is slow while I’m set up over a doe decoy and there’s no sign of deer in the area, I’ll give off a couple of bleats to see if I can attract a buck that might be within earshot.

Or I might use the bleat when I’m on watch and haven’t seen any deer for some time. I’ll bleat two or three times in an attempt to get a buck’s attention. When I bleat in this way, I do it loudly so that the sound will project at least 100 yards in every direction.

I’ve also successfully incorporated a bleat call into my rattling sequence. Two or three bleats just before and after the rattling sequence often will be exactly what it takes to bring a buck to the antlers.

On the whole, the bleat is one of the most versatile calls a hunter can use. It works well from September through January and in nearly every kind of situation you’ll encounter.

**Yearling Grunt **
Bucks that are one and a half years old haven’t matured enough to make deep, guttural vocalizations, so their grunts sound very much like those made by adult does. Because of their similar tone, I group yearling buck grunts and doe grunts together. These grunts sound like someone burping (grrrunt) and are generally short or medium in length and soft to moderate in volume.

Does and yearling bucks use a soft grunt for a variety of purposes, but most frequently it is used as a locator call. In addition, they might give off a grunt during a confrontation with another deer over food. When this happens, the grunting deer’s body language can range from ears pulled back to standing on its hind legs to fight off the intruder.

When used as a locator call, this grunt is made as the deer walks through the woods or responds to the vocalization of another deer. Does and especially bucks often give off grunts as they travel during the autumn months. If I see a buck moving through the woods at a distance, I’ll grunt to get his attention. If he starts toward me I won’t call again unless he stops. When this happens, I’ll call again to try to get him to come back.

If I hear a buck grunt (and I haven’t initiated his grunt), I’ll grunt right back at him. If a buck is in the mood to vocalize, you need to try to call him to your location. As with the bleat, incorporating this grunt into a rattling sequence is also a great tactic.

Dominant Grunt
The dominant buck grunt is very similar to that of an adult doe or yearling buck, but with one very distinct difference: it’s much deeper.

If you happen to hunt in an area that has a good adult buck population, you’ll want to master this sound. It’s a great call to use on a dominant buck during the heat of the rut. Most mature bucks are very aggressive during this time and it takes very little for them to come running. There are two 160-class whitetails hanging on my office wall that fell for this tactic.

The dominant buck grunt can be used in the same way that the doe/yearling buck grunt is used. But a word of caution: Don’t use this call if you are trying to work a yearling buck. Chances are you will scare him off, because the hierarchy of the whitetail is such that mature bucks harass smaller bucks from the time their velvet is peeled, so that when the rut rolls around, yearlings will often run if they hear a mature buck grunt.

Nearly all of today’s grunt tubes are capable of making this sound, although some tubes do it much better than others do.

Tending Grunt
The tending grunt is by far my call of choice during the rut. I’ve never found any call that tops this one for luring in a buck during the tail end of the breeding period. When a buck is with a doe that is in or near estrus and other bucks are nearby, the tending (or dominant) buck will usually make a tending grunt by dragging out a grunt for a minute or longer.

Bucks have been known to make this sound for more than five minutes. I once timed one of my research bucks making a tending grunt that went on for nearly six minutes.

The tending grunt is of moderate intensity and is a series of short grunts repeated in rapid fashion (one grunt after another, with very little break in between.) The buck that is tending a doe will almost always make this sound when another uck tries to take the doe from him.

I like to use this call when the breeding phase of the rut is due to start. When a buck hears it, he knows an estrous doe should be in teh area and often will come to check out the action. A tending grunt isn’t foolproof, but it’s as close to the perfect rutting call as you’ll get.

Hunter’s Specialties’ “True Talker’ makes the most accurate tending grunt I’ve ever heard. By placing your tongue on the roof of your mough and making a ticking cadence (while blowing through the tube), you can create a near-perfect tending grunt on this call.