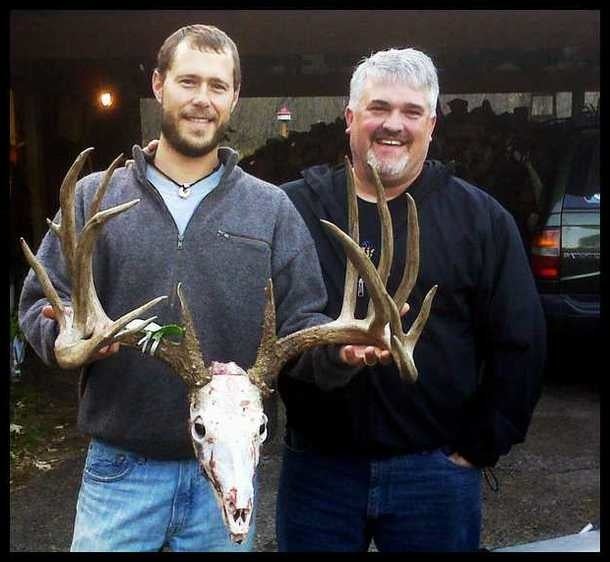 The 16-point, Buffalo-County buck had been videoed last summer, and the incredible footage was widely distributed throughout the internet. Back then it was rumored to be a world record whitetail, and hunters everywhere were hot to collect it.

The buck had not been seen until Decker shot it at a distance of seven yards, during a mid-morning hunt on private land in the rolling hardwood hill country of west-central Wisconsin.

Decker, a mill worker in Eau Claire, and his hunting partner that day Paul Olson, have been inundated by well wishers, the media, and interested hunters from almost everywhere in America. Decker isn’t taking phone calls, but his friend Jack Dodge is the taxidermist who will mount the buck, and as a long-time bowhunter in the area. He is very familiar with Decker, the buck and that part of Wisconsin. He filled me in on a lot of specifics about the “Decker Deer.”

“The buck wasn’t that big, only about 200 pounds, and I aged it at 3.5 years old,” Decker said. “It was a genetic giant, a real freak of nature, and I think that’s one reason he was so big, so young. I also believe a bowhunter had the best chance to take him in the size and condition he was in.”

Dodge says much of that part of Wisconsin is comprised of private property, and plenty of it under “quality deer management” to improve buck size. Dodge says many area hunters lament QDM in some ways because when a buck in low-hunted private areas reaches 5, 6, 7 years of age or more, they are almost unkillable.

A young, super-buck, like the “Decker Deer,” was vulnerable because of its comparative immaturity. Also, Dodge says the buck had no evidence of fighting, with no scares around the head or neck, and no broken antlers. Though the buck had much hair worn off from rubbing trees. In just a couple weeks, when the rut kicks into gear (and rifle season begins), it’s almost a certainty the buck would have been fighting, and could have lost many inches of antler. Dodge sees that frequently from the many whitetails brought into his taxidermy studio.

“The rut has not kicked in yet, and shouldn’t until about Nov. 12,” he explains. “But something turned on bucks that Saturday morning when Decker shot his deer, because I had a lot of business with big bucks brought in for mounting that Saturday – but almost nothing the next day, Sunday.”

Dodge caped the buck for a standard shoulder-style mount, which he says is what he expected Decker to do with the deer.

“Bob is just a regular, down-to-earth guy, and is proud of being lucky enough to take such a tremendous animal,” Dodge explains. “He believes anyone could have taken the buck, he just happened to be fortunate enough to be on stand when the buck came by.”

Although Decker has taken many good bucks with his bow, he hadn’t shot one in a couple years, according to Dodge. So when Decker first spotted the big buck at 40 yards he was very excited, though he believed it was only a nice 10-pointer. As Decker turned toward the deer, he had to adjust his safety harness to get positioned well to the buck for the shot. By the time he got situated, the buck was close and it was time to draw and shoot – at a mere seven yards.

Although Jack Dodge is not an official Boone and Crockett scorer, he has personally taken a Wisconsin B&C buck, and sees more giant-rack whitetails in one season than most people see in their entire lives. He hesitates to predict what the “Decker Deer” will officially score, because it has a slightly unusual rack. He believes it will take a judging panel or jury of five people to officially score the buck.

The deer has been taken to a scoring judge, for drying and official scoring later. It is not at Dodge’s taxidermy studio.

Dodge says the deer could be scored several different ways, and conjecture about how high it will score is silly. It’s a basic 14-point buck, with huge and towering tines. But there are two unusual points, however, allowing the buck to be scored typical or non-typical. While emphasizing that he is not an official scorer, Dodge indicates the buck should score minimally as 190-inch typical; likely more than that as a non-typical.

“It’s going to be close to a state record, and who knows about a world record,” he says. “Bob Decker isn’t all that concerned how it scores, or how high, just so it’s done right. The deer is what it is – a great Buffalo County buck taken by a great guy and bowhunter.”