Dispatches from the Field: By A Whisker

A family feud leads to a narrow miss 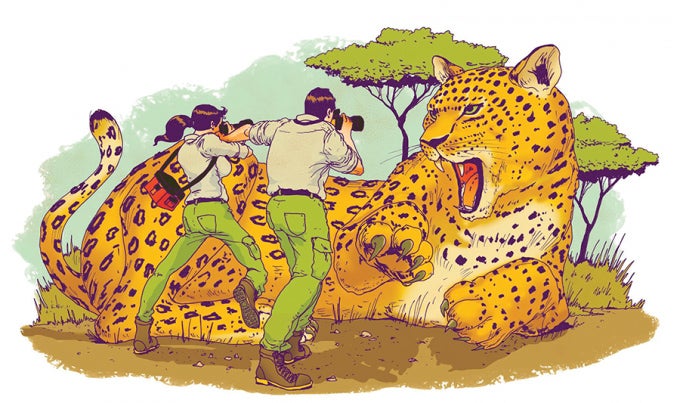 It all started quite innocently. One Sunday my wife and I embarked on an early morning drive in South Africa’s renowned Kruger National Park. Catherine is a seriously keen wildlife photographer, and I’ve come to realize there is indeed some truth to the saying, “If you can’t beat them, join them.” Therefore, I often venture forth into one of Africa’s greatest wildlife areas with a Canon camera instead of my cannon of a .505.

The main roads in Kruger are paved blacktops, which retain heat overnight. Big felines know this, and they often drape themselves on the warm asphalt. So, the secret to seeing lions and leopards is simply to jockey yourself into position so you’re the first through the gate and down the road.

We managed this feat that morning, and soon happened upon a pair of mating lions. They apparently took offense at our photographing their nuptials, and they moved off.

Soon after, I spotted a handsome mature leopard sitting like a dog in the middle of the road. He disappeared into the golden knee-high grass as we coasted down a gentle slope toward him. I mentally marked the place he had vanished and eased to a stop nearby. The big old tom was lying in the grass about 10 paces away, staring at me intently. He reclined there, perfectly camouflaged and successfully confusing the auto-focus function of my camera lens.

Meanwhile, Catherine was seated in the SUV’s backseat, photographing from her own window. But she couldn’t see the big cat.

Now, there exists some intense competitiveness within the Robertson family—especially when it comes to our respective photographic pursuits. She grew frantic, repeatedly asking me to point out the leopard. I was fiddling with my camera, trying to figure out how to turn off the darn auto-focus while she jabbered in my ear. I became so irritated that I foolishly stuck my arm through the window, pointed directly at the lounging beast, and bellowed, “He’s right there!”

Now, as you can imagine, ol’ Mr. Spots didn’t take kindly to this. With guttural sounds similar to the revving of a V8 engine (without a muffler), he charged the vehicle. Or, more precisely, he charged me. I stared deep into his fierce yellow-blue eyes as he surged forward. Then he was beside me with such speed that I’d only managed to retract my arm halfway inside the car. It would have been easy to spit in his eye, but this was the last thing on my mind.

Miraculously, the leopard decided he had made his point and ambled off. He stopped every few paces to throw me the most disdainful expression imaginable.

All told, it was a thrilling Sunday compared to most. And from Catherine’s perspective, it was a just reward for my short temper.

As for the photos, every one showing his departure turned out blurry. In all the commotion, I had finally shut off the auto-focus.