Hunting dangerous game on the Zimbabwean plains demands a touch of courage and a heaping dose of madness. But when your PH is a bit eccentric, a safari can sometimes get out of hand. 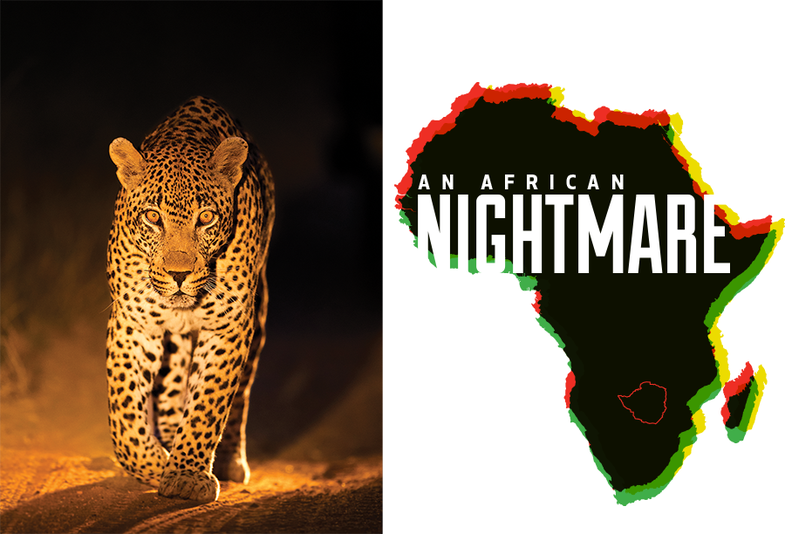 The cape buffalo herd stampedes in a tight circle, a hundred beasts pressed shoulder to shoulder, grunting, farting, and bawling, their pounding hooves raising a red tornado of dust above the plain.

“They do this when they’re attacked by lion prides, man,” Russ Broom says. “We should get closer.”

We are 40 yards from the spinning stampede as it is, so close that should the herd decide to uncoil and charge us, we’ll both be dead in seconds. At that moment, six days into my first safari, I decide that my professional hunter is not just unorthodox in the extreme. He’s stark raving mad. “I’m not moving,” I say.

A short, barrel-chested man with sunburned skin, Broom squints at the dust, shoots me this manic grin, and says, “There’s a 45-inch bull in that bunch. If we don’t get closer he’s as good as—”

The herd breaks formation, whirls, and thunders away. For a second or two, through the red dust, I see the horns of the monster fleeing but cannot get a shot.

“Feck, that was a big Cape, man,” Broom says, disappointed and amused.

Jelly-legged and stunned from being that close to an African Cuisinart, I say nothing. Broom hangs his hat and binoculars on the shooting sticks, sits on a termite mound, chuckles, and lights up a cigarette. It’s his fourth or fifth of the day.

His smoking doesn’t bother me as much as it did the first time he lit up. We were on buffalo
tracks, getting close enough that scent mattered, and Broom fired up a Newbury. I was horrified and said so. He was dismissive.

“If we can fool their noses with me smoking, we’ll catch them by total surprise,” he said. “And with the smoke, I can watch the wind drift.”

Throughout that stalk Broom held the cigarette up in front of him like a divining rod and kept moving us so the smoke was constantly going over his shoulder. I hate to admit it, but the tactic was devastatingly effective.

And earlier on the afternoon of the buffalo stampede, Broom smoked as we stalked the big herd that migrated out of Hwange National Park in Zimbabwe’s northwest corner. Every time we got close to the buffalo, we were dead downwind. They could see us, but they could not smell us. Finally, after four close calls, a kind of a collective bovine nervous breakdown had occurred and started the whirling.

“Well, then,” Broom says, crushing the cigarette. “Shall we move on? Alfred? Will you get the truck? There’s that leopard bait not far. We should check it.”

Broom’s lead guide heads off and soon meets us on a two-track with the Toyota. By now the adrenaline of a close encounter of the buff kind has given way to amazement. Forty yards from spinning death and we lived to tell the tale.

“You’ve seen that before?” I ask. “The way they stampeded like that?”

Broom’s great-grandfather, Jack Hervey, was a pioneer in Rhodesia in 1890. In the 1960s, his father, Geoff, founded the safari industry in that country. Broom shot his first buffalo at age 9, and his first elephant at 12. He received his PH license at 18, then studied business at the University of North Carolina, Chapel Hill.

Back in Africa, Broom hunted hard, working for his father, and as a PH in Tanzania and Zambia for more than 20 years. After Robert Mugabe’s policies resulted in the seizure of his family land, Broom left his homeland and the safari business. He moved to South Africa and built houses. But his restless nature and love of hunting brought him back.

Now 52, Broom has a deep understanding of where and how to hunt in Zimbabwe. By the time he picked me up in Victoria Falls, he’d decided to move my safari from the famous Matetsi hunting area to the Ngamo-Sikumi, an area he hadn’t hunted in 20 years.

I wasn’t happy about this, but it turned out to be a blessing. Thick and unforgiving, the Sikumi forest borders Hwange Park for nearly 30 miles. Plains and dangerous game drift in and out, searching for water and browse in the mopane thickets and grasslands. There are elephants everywhere. I stopped counting at 500. And the sandy soil makes for excellent tracking, which is how we’d come a few days before to put leopard bait in a tree not far from where the buffalo stampeded.

When we get to the bait, it has been hit. Hard.

Alfred and Abednego, who at 60 has tracked in the Sikumi for 40 years, find the pug of a large leopard. And the trail camera reveals that the cat had been there that morning in broad daylight. We get no good look at the sex from the other pictures, but there’s no doubt it’s big.

Broom checks his watch. Two and a half hours until sunset. The trackers and Meka, the Zimbabwean game scout assigned to my safari, build a grass blind 65 yards downwind of the refreshed bait. Broom and I return to camp to gather provisions and mattresses to lay on in the blind.

A Nightmare With Spots

Back in the blind, the game scout insists on being the flashlight man. In prior outings, this has proved to be disastrous. Sweet and well-intentioned, Meka’s no rocket scientist, or at least no flashlight scientist.

During our previous two encounters with female leopards, the game scout had been unable to respond to Broom’s basic commands: “On,” “Off,” and “Whatever you do, don’t shine it in the blind, you’ll get us fecking killed, man.”

No matter how hard Broom tries to remove him from this duty, the scout doesn’t budge. As the sun sets, the three of us climb into the blind. Elephants trumpet from multiple directions. Then, in the distance, I hear a deep-throated cross between a hoot and a cough, three times in rapid succession.

“What the hell is that?” I whisper.

“It’s your leopard, man,” Broom says. “He is trying to tell the world the bait is his.”

Broom taps my shoulder, and I slide behind the gun, easing the Model 70’s safety off. Outside, branches are being thrown off the bait.

“You fecking idiot,” Broom hisses. “Turn the torch on.”

This is supposed to be one of the most intense experiences in hunting, and I’m choking back laughter when the light goes on. It’s surreal. There’s a huge leopard right there on the branch above the bait, but the scout doesn’t have the spotlight directly on him. We’re seeing the cat in the halo.

“Put the light on him,” Broom hisses, as he tries to make out the sex.

But the leopard’s had enough. He’s turning, going down the tree. At the edge of the trailing light he coils to spring. For a split second I have a sight picture and fire. The light goes out.

Seven hooting coughs, and the pounding of heavy paws has me convinced that he’s coming for us.

But then the forest falls silent for several moments.

“Why did you shoot?” Broom asks tensely.

“He was moving. The light was bad. I think you’ve wounded him.”

The nightmare of wounding a leopard gets worse. The worst. Before coming to Zimbabwe I’d read about following up on wounded leopards. They like to sink their front claws into your chest and spin their back claws, trying to disembowel you.

Alfred and Abednego pull up in the truck. The PH trades his Army-Navy .470 for a 10-gauge Ithaca.

Up in the high rack, Broom looks at me dead serious and says, “Don’t think for a second we’re safe up here, man. I’ve seen them come right over the hood.”

Now I begin to doubt myself. Why on earth did I decide to take that shot?

The truck moves, following the line we think the leopard took escaping. I keep expecting a tawny whirl out of the high grass, but there’s nothing.

We go back to the tree. Abednego finds a speck of blood at the bottom. Alfred gets down on his hands and knees with him. They start to track.

“You take the flank,” Broom says to me, moving to their right, a flashlight held under the shotgun barrel. “Our job is to keep them alive.”

We go forward at a crawl. The trackers find a sliver of blood before the track enters brush. Fifty yards from the tree, there’s a fingernail of blood.

“Any movement in the shadows, you start shooting, man,” Broom whispers. 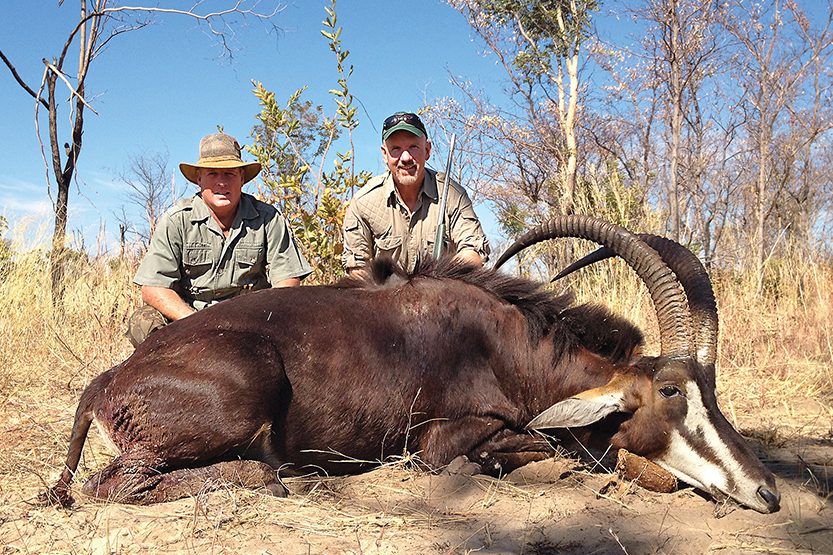 Left to right, Broom and author with sable.

It’s chilly out, dead of night, and we’re barely moving, but I’m drenched with sweat. At 80 yards, they find a bloody bone chip. And more specks of blood. At 125 yards, Broom says, “It’s almost too far. We’ll go another 25 and then come back in the morning.”

We step around a bush.

Seven feet seven inches of leopard is lying there heart-shot and stone dead.

For the second time that day, my legs are jelly. I’m dazed and overjoyed as Broom and the trackers pound me on the back.

On the ride back to camp with the trackers up top singing, I think I’m beginning to understand Broom’s sweet madness.

Then he takes a drag off his Newbury, glances at me, and says, “Feck, man, you don’t know how bad that could have gone.”

(Indeed, a year later at the very same tree, another leopard will bolt at the shot. He’ll turn, wait, and attack. Broom will get off a shot with the Ithaca, but the cat will be on Alfred, and then a different game scout nicknamed Company D. Both men will be clawed and bitten before Broom can kill what he calls the Sikumi Mauler.)

Three days later, the insanity of leopard hunting still lingers when in search of eland we cut fresh buffalo sign.

We set off on the track. I’m nowhere near as jacked as I’ve been on my last three stalks. After being charged by a sable and tracking the leopard, I figure I can handle another close encounter of the buff kind.

We walk and walk. The morning heat is building as we cross the savannah. I happen to look to my left 400 yards and glimpse the black backs of two Cape buffalo moving in the high grass.

“Get ready,” Broom says as we stalk in. “Could be dugga boys [old bachelor bulls notorious for bad attitudes].”

My heart’s pounding again. And there’s an odd hollow sensation in my gut that makes me want to smile.

The trackers drop from sight. Broom throws up the shooting sticks and binoculars, and says, “The one on the right.”

At 75 yards I can see the massive boss, but not the bull’s chest. Finding the tip of his shoulder, I drop my aim 12 inches into the grass, a little left, and fire. The bull spins and starts pounding in an arc toward us.

I fire again, hitting him square in the oncoming chest. He turns, moves into dense grass, and falls in a death bellow. Both shots hit the heart.

I look to my PH, whose expression mirrors my emotions.

“Feck, man,” Broom says, grinning fiercely. “Nothing like it, is there?”