Whitetail Tips: How to Map Your Hunting Area

Photo by: Mark Raycroft I’d spent much of the previous three months scouting my hunting area, collected hundreds of photos... 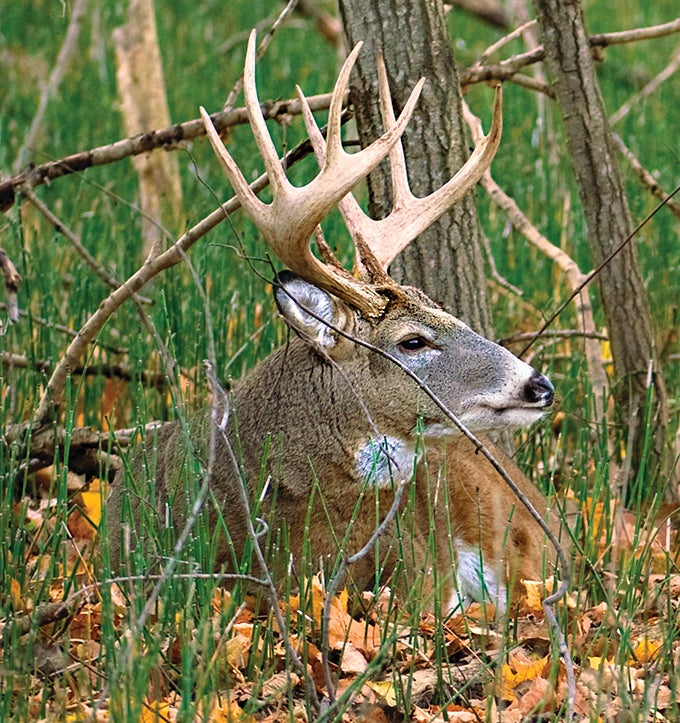 I’d spent much of the previous three months scouting my hunting area, collected hundreds of photos of different bucks from trail cams, and cataloged every rub, scrape, bedding area, and buck sighting on the property.

As intimately as I knew the area, I was sure I was in the right position in November when the rut arrived. A herd of does appeared in a grain field just east of my stand, which was no surprise, but when a massive 150-inch buck started chasing does at the opposite end of the field, I was shocked. I’d never seen the deer, I had no pictures of him on my cameras, and he appeared in the exact opposite location of where I had expected to see deer.

Certainly I had missed something.

But what? I’d kept excellent notes. I’d examined the data, and everything pointed me toward hanging a stand in the very tree from which I spotted the buck. I’d seen other, smaller bucks, all of which I recognized, but this new deer had come upon the scene very unexpectedly and made me look like a fool. Where had he been hiding?

The big deer’s sudden appearance baffled me, and I couldn’t figure out where he’d come from. I likely would have continued to believe that the deer was a nomad or a vagrant or simply a figment of my imagination had it not been for an aerial image I’d printed from the internet. I had coded it with a wealth of information: where I’d gotten pictures of specific deer, where I’d seen signs of feeding or bedding activity, and all the other data I’d gathered in the pre-rut.

But there was something else, something I had missed, and had it not been for that aerial map, I likely wouldn’t have ever figured out where that deer came from. I saw what I’d missed.

I had cameras positioned throughout the area, and I knew the routes that most of the bucks were using. There was a river that curved around the perimeter of the property, and beyond the river were grain fields that stretched for miles, which had all been harvested by that point and were as flat as a mowed lawn in November.

There was only one position I hadn’t monitored throughout the season—a series of islands in the river that periodically flooded and were covered with flotsam. Those small islands, which covered less than 2 acres of land combined, were uncharted territory. The buck, it seemed, was using them as a refuge. I didn’t know where he was feeding, but the map told me that he was most likely bedding there. I’d discovered my mistake. 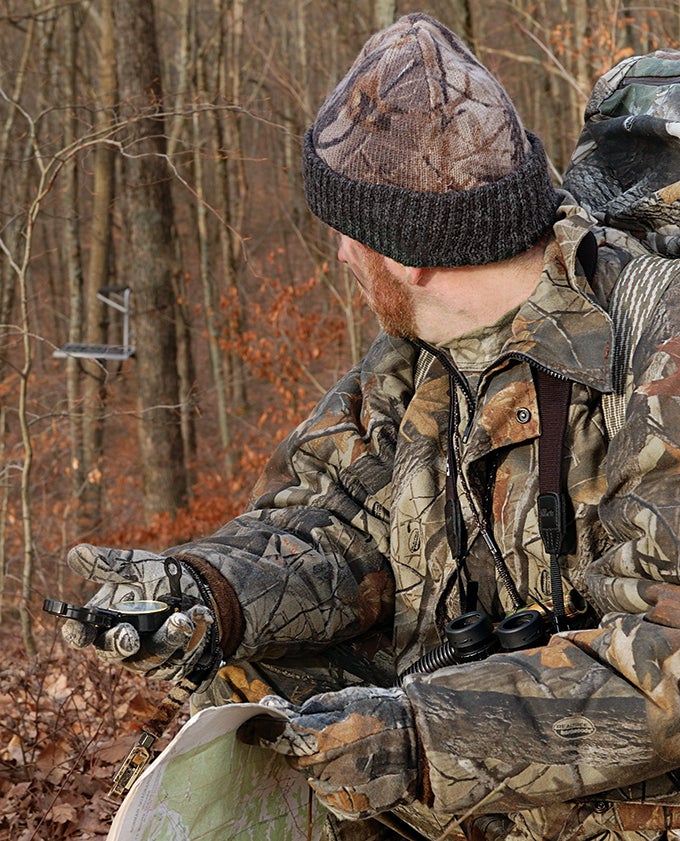 Scout and Get Organized

Thorough scouting leads to a better understanding of the habits and movements of deer within your hunting area, and that, in turn, increases your odds of connecting with a big buck. Today, hunters have a variety of tools at their disposal, including game cameras. But one of the most valuable tools in a hunter’s arsenal is aerial imagery.

Modern technology and the internet have made it possible to obtain a detailed aerial map of the land you are hunting, and it’s one of the best places to compile and examine the data you collect while scouting. By transferring that information onto an aerial photo, you should have a better view of what’s going on in your hunting area and a better understanding of where you need to be when the season opener rolls around. 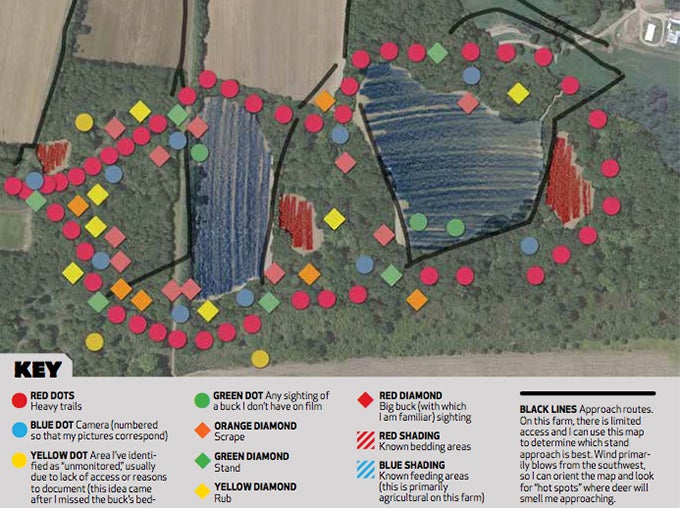 Make Your Map
Begin by printing out an overhead photo of your land from Google Maps and marking what you’ve learned through scouting during the pre-season. Just before the season, sit down and study what you’ve found, and develop a plan of action. You might also want to have a separate map that signifies the movements of a specific deer, such as a buck you have seen multiple times on different trail cameras. Be sure to catalog these key elements on your hunting-area map:

▶ Bedding Areas When you locate a bedding area, you often don’t know if it is being frequented by bucks or does, so you’ll have to assume that it’s a general bedding area. Draw a perimeter around it on your map and shade it in. I like to use colored pencils, and I use one color for all of the general bedding locations. If you find an area you know for certain contains bucks, use a different color for that spot.

▶ Feeding Areas Deer leave plenty of sign when they feed. Mark these areas with another color. Bedding and feeding areas are the most generic and most widespread marks on the map, but look for places where they overlap to highlight likely travel corridors.

▶ Travel Routes If I know that there is a specific travel route that deer frequently use (evidence backed up by sightings, sign, and trail-camera pictures), I use a pencil or marker to highlight those paths. In theory, they’ll connect feeding and bedding areas.

▶ Photos I use adhesive dots to signify places where a specific buck has been captured on camera. For one buck that I was trailing, I used two different-color dots; black indicated he’d been photographed at night, and red indicated places where he’d shown up during the day.

▶ Camera Locations All of my camera locations bear a blue numbered dot so I know exactly where my cameras have been located throughout the year. Camera Position 1 on my map, for instance, coincides with a specific trail that leads to feeding and bedding areas. I save all of my trail-camera photos from that camera position in a corresponding folder on my computer. Noting camera locations will also give you an idea of the areas from which you haven’t collected data, places like the river-bedding location described previously.

▶ Access Routes I know that the wind will be shifting throughout the season, so I plan a series of access routes based on wind direction. I’ve also used my map to ensure that these access routes to my stand don’t pass through areas where deer are bedded.

▶ Buck Sightings If you see a big buck during daylight hours, add that to your map. Hunters have a tendency to believe that we’ll remember every place we’ve seen a specific buck, but that’s not always the case. At the very least, if you happen to see a buck two or three times, you’ll have a better idea of his core home range.

▶ Rut Sign Scrapes and rubs don’t necessarily mean that you’ll kill a big buck in that area, but you’ll be able to identify locations where bucks have been. Rut sign often corresponds with travel routes, and by collecting data regarding rut sign, photos, and actual sightings, you’ll be better able to decipher a buck’s movements.