Armed with big-bore air rifles and a sense of purpose (and prejudice), a volunteer eradication crew pursues invasive reptiles across Puerto Rico's countryside. 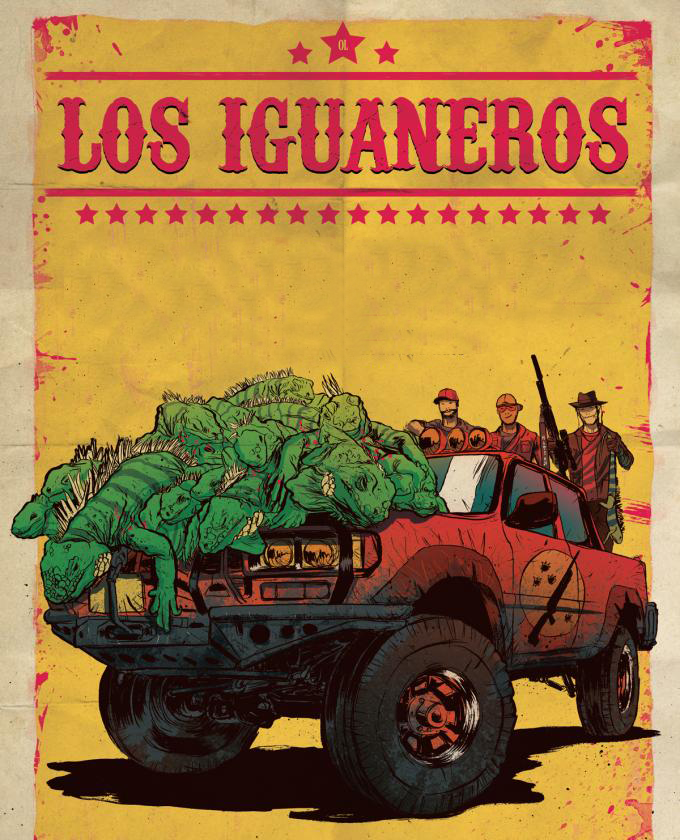 Somewhere there may be wise, funny, charitable iguanas, and some of you may keep them as pets. But squinting up into a mangrove tree in southern Puerto Rico, trying to resolve a red-eyed, hissing wild iguana in the confusion of slender green leaves, it’s hard to imagine these lizards as anything but back-alley larcenists. Lunch-money bullies. Grifters.

Maybe it’s the air rifle in my hand that places me in such stark opposition to these iguanas, but I admit it: It’s deeply satisfying to shoot these invasive opportunists that are quickly taking over the island. There is also a sensory reward. Thwap spits the gun. Thwunk announces the meeting of hol­lowpoint pellet and leather. If it’s a good shot, the sound of a 10-pound lizard free-falling through the limbs and smacking on the ground. Crash! Thud!

I’m here, not far inland from the port city of Ponce, to help reduce the infestation of non-native iguanas that are causing many millions of dollars in damage to fruit orchards, crop fields, and even highways and other infrastructure. Because Puerto Rican firearms laws are either restrictive (minority opinion) or confusing (majority opinion), my group has opted to hunt the reptiles with air rifles—new .35-caliber Carnivores from the Turkish company Hatsan. For the first day, we do pretty well. Between five shooters, we drop maybe 40 iguanas from the treetops.

Then Alex Roman, his father, Frank, and his uncle Wilbert show up. And I get an education in lizard eradication.

The Romans are part of a loose confederation of Puerto Rican damage-control volunteers who get invitations from large landowners to kill as many iguanas as they can. Some of these reptile-ridders are self-styled rogues who call themselves “Los Iguaneros” and have made desperado-themed videos that you can see on YouTube. The Romans are a little more restrained with their self-promotion. But they are deadeye killers, all the same. In my first day hunting with the family, we dispatch nearly 100 lizards.

Puerto Rico’s iguana problem started, in all likelihood, with a few pets released into the wild. Those outcasts met and bred, and soon their progeny, feral and ravenous, started moving around the island, following the coastline at first, but about 10 years ago, they started moving inland. Initially, iguanas were considered a novelty. But in just a few years, populations went from scattered to dense, and from nuisance to environmental catastrophe. There is no part of the island where you won’t find the invaders gauchly lounging in trees, but they are particularly troublesome in the countryside, where they eat or damage as much as a quarter of the crops. And in a United States territory that’s teetering on the brink of economic collapse, any reduction of its export business is taken seriously. The favorite foods of iguanas are banana, papaya, and melon.

Because of their habit of burrowing deep underground to make nests—each female lays around 70 eggs twice a year—iguanas have also been blamed for highway collapses and sidewalks that crack and slump. Even the main international airport in San Juan has been affected by the lizards. Iguanas love to bask on hot surfaces, and it’s not uncommon for the airport’s runways to close on summer afternoons so they can be cleared of lizards, which can flatten tires and even be sucked into the turbines of jet engines.
Experts estimate Puerto Rico’s iguana population to be between 10 million and 14 million, but because the reptiles have no natural predators here and because of all the food they can find and eat, the population is expected to double every year or two. And that’s where the Romans come in.

Alex Echevarria Roman is 23 years old and formally polite. But he has eyes like a falcon and has probably collected more pounds of wild meat with an air rifle than anyone I’ll ever know. For the last 10 years, he has roamed Puerto Rico with his family, trying to kill every iguana they see. As we talked, we walked through a stand of trees on the edge of a large mango plantation, and every few minutes, Roman would stop, point up, direct my aim (“Shoot for the spot just behind the eye”), and wait for me to drop an iguana before continuing.

“We distribute our phone numbers around the countryside and tell people, mostly big-scale farmers, to call us when iguanas get out of control,” he tells me as I settle my crosshairs on an avocado-green 5-footer. “At first, we’d get a few calls a month, but now, we can’t keep up. We come to a farm like this one [outside Ponce], but it’s not possible to control them. We can kill 100 iguanas in a spot, and return a day or two later and kill 100 more.”

I hit the lizard a little too far back. This is a bad thing, because unless you hit a cold-blooded iguana just behind the eye, it won’t die instantly. Instead, it may scurry around the trunk and out of sight, or it may hang up in a crotch. Or, like this one, it may drop out of the tree, ready to fight. To see a wounded iguana on the ground is to see a Japanese Godzilla flick come to life. The lizards hiss, they flare their frills, and they often charge their persecutors, trying to whip them with their saw-sharp tail. They remind me of the sneaky, venomous dilophosauridae from Jurassic Park, and I don’t mind telling you they freak me out a little bit.

“We mainly use air rifles,” Roman continues after I dispatch the wounded lizard and regain my composure. “Partially because they’re much cheaper to shoot [than firearms], but also because in Puerto Rico you can only use firearms during fall hunting season for pigeon. But it’s legal year-round to hunt iguanas with air rifles. My favorite time is February, during the breeding season. Then, the machos can get very aggressive.”

Roman prefers .22-caliber air rifles for their flat trajectory and accuracy. I’m shooting a hard-hitting .35-caliber pellet out of my Hatsan PCP (pre-charged pneumatic), and after about 20 shots, I have to swap out air reservoirs that we filled earlier in the day from a big scuba tank in the back of Alex’s pickup. The Hatsan shoots 82-grain pellets that look almost exactly like bullets from a .380 semi-auto. Even imperfect shots hit so hard they generally knock the lizard out of the trees. Thwap. Thwunk. Crash. Thud.

After a couple of hours of Roman’s guidance, I get pretty good at seeing and hitting the cryptically colored iguanas. I feel as though we’re hunting unwholesome squirrels as we move quietly through the trees, like we’re hunting unwholesome squirrels. And just like with squirrels, the shots get harder as we go. These reptiles are keenly aware that humans mean danger. Once we kill a few, the rest either climb high into the foliage or morph into the bark—like the chameleons they are related to, they can change colors to match their surroundings, so often the only way to spot one is to spy their long striped tails—or they drop out of the trees into a shallow creek and swim away. The biggest iguana I kill is nearly 6 feet long and about 10 pounds; the average measures 4 feet from scaly nose to whippy tail.

The largest iguana Alex has killed was a female that weighed 18 pounds and stretched over 7 feet.

Chicken of the Trees

By the end of the day, we have collected dozens of iguanas, and have tried to keep them out of the searing Puerto Rican heat until we can clean them. They will be tonight’s dinner. Their scaly thighs elicit competing responses. These are repulsive reptiles that sometimes carry salmonella. But you work up an appetite gunning dinosaurs all day.

So we clean a few dozen of the meatiest specimens and take them back to the farmhouse that we use as a gathering place. There’s an outdoor grill with red-hot coals. While someone prepares arroz con gandules (rice with peas), the iguana tails and thighs sizzle and pop.

The taste is, predictably, like chicken. But even more accurately, it’s like a tough, dry scallop. The texture lends itself to being slow-cooked in a sauce, like a cacciatore. Between mouthfuls, I ask my hosts if iguana is commonly eaten here. When they laugh uncomfortably, Alex explains that while iguana is considered a delicacy in other parts of Latin America, where the reptiles are indigenous, Puerto Ricans never acquired a taste for them. Like me, they tend to be repulsed by the lizards.

That’s part of the problem with controlling iguana numbers here. There’s no market for their meat, and so little incentive to hunt them.

It occurs to me that as much as I want to vilify the iguanas, they are doing what every other organism does—they’re making a living however they can. And it’s a good living, with nothing to stop their steady expansion except the physical limitations of the island. And a few thousand more airgun-equipped hunters.

As we leave the farm, I see the only naturally killed iguana of my week on Puerto Rico. Its decomposing body is stuck in a hurricane fence around a demolition site, too fat to fit through the links.