Outdoor Life takes a lucky reader on the elk hunt of a doze lifetimes. 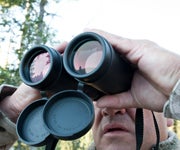 A middle-aged man bouncing down a flight of stairs and grinning from ear to ear is apt to snatch your attention. When it happens in an airport terminal, be prepared for a swarm of TSA agents.

“Let me introduce myself,” the jovial traveler offered, striding confidently past stupefied uniformed agents and directly up to where I was standing at the Albuquerque baggage carousel. “I’m Steve Chafin, aka The Luckiest Guy in the World–LGIW on outdoorlife.com.”

An overstatement, perhaps, but to Chafin, winning Outdoor Life’s Grand Slam Adventure Contest trip to Chama, New Mexico, had Powerball beat to hell. And it didn’t take long for the 48-year-old Hoosier to explain why.

“I live in Bloomington, Indiana,” said Chafin, “but Chama changed my life. I’ve devoted myself to wildlife habitat restoration and have worked on two projects near Chama, one in 2006 and another in 2009. I worked on elk winter range enhancement as an ecologist for the BLM and Forest Service. That’s when I fell in love with it. My family also loves Chama. Heck, we even named our Gordon Setter puppy ‘Chama.'”

During the three-hour ride north from the airport, it was easy to see why Chafin was so enamored. Forget your stereotypical New Mexico–this is not rattlesnake-infested desert. In fact, Chama, which lies on New Mexico’s north-central border with Colorado, receives more rainfall than any other area of the state. It is amazingly green and lush, and surrounded by the breath-stealing San Juan Mountains.

Hand-in-hand with “green-and-lush” comes some of the best elk hunting on the planet–and, after all, that’s why we were here.

“After thirty years of hunting, I went on my first elk hunt in 1999,” Chafin said. “That hunt was unsuccessful, but I was gut-hooked. Since 2006, though, the price of non-resident tags has nearly doubled, and I’ve been unable to go.”

As Chafin further explained, there is elk hunting, and then there is elk hunting at the renowned Lodge and Ranch at Chama, our destination. Like a rock-and-roller fantasizing about jumping the gates of Elvis Presley’s Graceland, Chafin had long dreamed about roaming the ranch in search of the bull of a lifetime. For him, it’s the ultimate elk habitat.

“When I was working out here and on subsequent family vacations, I’d see the signs for the Lodge and Chama Land & Cattle Company,” Chafin said. “It’s like the Holy Grail of elk hunting. Now I’m going to actually get to do it.”

Grouse of a Different Color
Owned by the Jicarilla Apache Nation, Chama Ranch spans 56 square miles of the high San Juans. Whereas elk might have been Chafin’s winning Powerball ticket, trout fishing and blue grouse hunting would soon provide his Lotto bonus, as described by head guide Pat Carpenter when he greeted us at the lodge entrance.

“Elk season doesn’t start for a couple of days, guys,” he said as he reached for our bags. “So as a warm-up–and to work into the Outdoor Life Grand Slam plan–we’ll hunt some blue grouse and then fish for trout. We had a great grouse hatch this year and they’re everywhere.”

We instantly recognized Carpenter as a man of his word, which admittedly caused Chafin, OL Photo Editor Justin Appenzeller and me to exchange sideways glances during the hours-long and grouse-less ascent up the mountain. With more than 500 miles of roads, Carpenter’s plan was to head up into some high-altitude shrub meadows with the hope of catching the birds either loafing or feeding and then walk them up. Fall typically finds hens and poults on the edges of meadows foraging for berries and insects. I wish I could say that the search was short.

Finally, after four hours, and with thick fog and drizzle shrouding the 10,000-foot peaks, a sharp-eyed Chafin spotted a lone bird perched atop a deadfall amid a copse of young spruce. Soon others from the family unit of hens and poults began to take shape through the haze, putting our Grand Slam winner on point. With Appenzeller attempting to capture the action on camera, Chafin put on his best ruffed grouse moves. And just as with a ruff, the surprise of a booming blue flush made target acquisition difficult.

“With ruffed grouse, you typically don’t get any warning when they flush,” Chafin said. “At least with blues you get to see them–though it doesn’t make it any easier to hit them.”

And Chafin was a bit rusty at first, but he soon got the hang of the game. By the time the morning of Day 2 rolled around, it was lights out for blue grouse. His three-bird limit, which took six hours to accomplish the first day, took only three hours on the second.

“The blue grouse were everywhere on the second day, and remarkably fast when flushed,” Chafin concluded. “It’s been a while since I’ve grouse hunted, so my eyes want to focus on the tail fan when they’re flying rather than looking for the head and pulling way ahead of it before firing. It’s a great test of reflexes and shooting skill.”

**
Trout Unlimited**
With the evening’s dinner breasted and on ice, Part Two of Chafin’s Grand Slam journey began. Although the Chama Ranch’s reputation was firmly built on world-class elk hunting, we soon discovered that there’s another powerful story to tell about this magical land, and that has to do with trout. Spring creeks, high-canyon rivers and more than a dozen Alpine lakes holding brown, brook, rainbow and cutthroat trout dot this entrancing landscape.

“We stock our lakes with a thousand pounds of fish each spring,” Carpenter explained as he rigged fly rods. “Rainbows predominate, but we’ve also got cutthroats, browns and some brookies. Let’s break for a quick lunch, jump in a boat and give it a go.”

We were not prepared for lunchtime accoutrements or the entertainment that came along with it. In what I thought was a rather bizarre scene, I stood with a leg up on the bumper of Carpenter’s truck as he spread a red-checkered cloth on a lakeside picnic table. There were laughs all around when he pulled a wicker picnic basket from the cab of the truck and passed out plates, silverware, cloth napkins and wrap sandwiches. There would be no peanut butter-and-jelly here. Perhaps the best part was our very own “redneck entertainment center,” which played out on the lake as a backdrop. All manner and size of trout crashed insects on the surface in every corner of the lake, many leaping a full 1 to 2 feet out of the water.

The action became almost laughable once we armed ourselves with fly rods to fend off the marauding fish. After a foot-long rainbow leapt into Chafin’s boat, it was game on and continued that way well into the afternoon, despite the windy and sometimes rainy conditions. If you’re accustomed to fishing streams and lakes and working hard for a couple of shots at rising trout, you’ll think you’ve died and gone to heaven in this place.

Two days of appetizers made the main course that much more welcome–elk hunting Chama-style, which entailed a 4 a.m. wake-up followed by an hour-long drive to high-mountain meadows to glass and listen for bugling bulls. With early September temperatures hovering in the 60s, our optimism for a hard-core, iconic bugle hunt waned, but this was elk hunting and anything could happen.

“It’s a little early, and the bulls just aren’t quite on it yet,” said Carpenter between swigs of water. “The bulls will hopefully still be out feeding in the meadows at first light before heading up to the higher elevations to bed for the day. I’m hoping we can catch them out in the open before they go up.”

We were already too late, but Carpenter was quick to read the tea leaves when we spied a young 6×6 at the head of the basin and making for the peaks.

Twenty or thirty minutes later, Carpenter–followed by his band of merry men, including Chafin, Appenzeller, videographer Eric Schwink and myself–slipped into the noticeably cooler, and flatter, ridgetop spruces. Being on top of the ridge is a heck of a lot easier than climbing up it, I recall saying to myself, when a high-pitched bugle stopped us in our tracks. We ducked for cover instantly–Chafin propped his Mossberg 4×4 onto shooting sticks and Carpenter reached for a cow call. After 10 or 15 minutes of silence, we were on the move again, tip-toeing through dried spruce boughs and hopscotching bog stones.

“Bull! Shooter bull,” I whisper-shouted to Chafin, who was creeping a yard or two behind our guide.

I’d love to be able to say that a giant New Mexico monarch stood stock-still just 100 yards away, perfectly positioned for a shot, but I can’t. In fact, it all happened so quickly that I seriously questioned even seeing the flash of antler. The thunderous sound of hooves hitting dirt, though, confirmed what had happened. The opportunity was lost, but Chafin never really stood a chance. So it went for much of that day…and the next. The weather was too warm and the bulls were too quiet.

Throwing a Change-Up
With just two days left to hunt, everyone but Chafin was feeling a bit of pressure.

“There’s no shortage of elk–every day we’ve seen plenty of animals, but the standards of what is a shooter bull here are pretty high,” he said. “There’s no need to be impatient and take just a ‘good’ bull. I’ve had to change my standards.”

Carpenter, though, decided that the time had come to pull out the stops. “New spot tomorrow, guys,” he told us. “Time to change our luck.”
The next morning, armed with decidedly renewed exuberance, we piled into Carpenter’s rig for the all-too-familiar, coffee-spilling ride up the mountain. With a cooler dawn breaking, Chafin snicked a .338 Nosler Accubond into his Mossberg 4X4 and fell dutifully in line behind Carpenter. Schwink was next, with Appenzeller and myself bringing up the rear. All along I’d considered the chances of the five of us walking up on a bull to be rather slim, but on we would go.

To a hunter, there are few sounds more awe-inspiring than the sound of a bugling bull elk at first light, and just as Schwink gave us the thumbs-up to confirm that he had enough light to shoot video, a bull screamed in a nearby meadow. Carpenter responded on his cow call, but rather than a return bugle, I could make out the distinctive sound of antler on antler–much closer than the rather far-off bugle. Our guide had heard it as well.
With the decisiveness of a war-games commander, Carpenter motioned for Chafin and our videographer to follow along and for Appenzeller and me to stay put. The trio hustled down the two-track before coming to an abrupt stop, Chafin holding up two fingers to indicate that there were a pair of bulls in the timber.

Even when you’re braced for a rifle’s report, the bang is still jarring. I eased to my knees at the shot and could now see two “shooter-bull” sets of antlers heading off the flat and into deeper timber. Carpenter’s double fist pump told the tale.

“He’s done,” Carpenter whispered. “I’m sure he didn’t go very far.”
Carpenter was right. Not 50 yards from where it absorbed the second shot lay Steve Chafin’s bull–a 6 by 7 Chama Grand Slam bull, and perhaps the most meaningful bull he’ll ever shoot. The tears welling up in his eyes said it all.