Elk On The Fringes 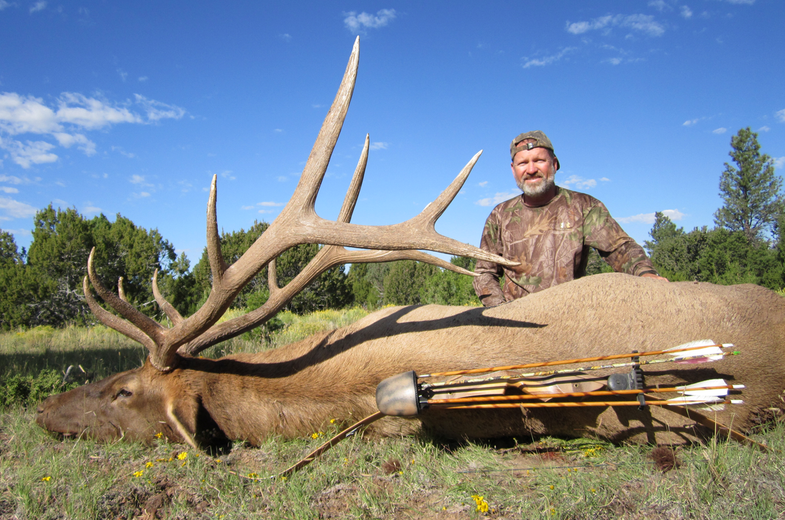 From the sound of his bugle, he’s heading our way,” my guide assured me as we hunkered at the edge of an aspen grove in Colorado. “That’s good. If he was heading in the other direction, he might end up on public land. We usually don’t see too many hunters over there, since the only access is by foot or horse. But you never know.”

Even though adrenaline was preparing my body for an encounter with elk, I filed the public-land information away. We resumed our stalk, positioning ourselves above the bull and his cows. My shot was as smooth as a Tiger Woods putt and my reward was a six-point bull.

As we bounced back to the ranch in his seasoned Ford, I casually asked my guide about the size of the public land surrounding the ranch and the pressure it received. He was honest and upfront with the information. I didn’t go into the guided hunt with the intention of trying to discover how to stalk the fringes of the private ranch. Still, my inquisitive nature led me to another way to hunt in the area if I wasn’t able to go the guided route. To date I haven’t returned to hunt that public parcel, but it’s marked in red on my map for whenever I have the chance.

Without a doubt, Colorado is Disneyland for elk fanatics. According to Todd Malmsbury, chief of the information agency for the Colorado Division of Wildlife, the state had a post-hunt statewide population of nearly 300,000 animals in 2002. There are so many elk in Colorado that many areas have more elk than state biologists’ long-term objectives call for. This is in a state where a century ago the population was less than 2,000 animals.

Colorado’s other big attraction for elk hunters is its huge amount of public land. Headlining the public-land lineup are those areas managed by the U.S. Forest Service. There are 11 national forests in the state and 8.4 million acres of Bureau of Land Management property.

Even though elk abound on public land, hunting pressure often drives them to the surrounding private holdings, where pressure is regulated and likely restricted. You might not always have the money to go on a guided private-land hunt, but research and a fringe-hunting strategy can lead you to less-pressured elk.

Some elk herds living in the mix of private and public holdings may spend most of their days on private land, but the rut and fall snows often drive them across private fences to public land. For high success on public land, hunt the fringes of the larger private parcels in your desired area.

I’ve used similar strategies for muleys and whitetails, locating areas where hunting is restricted and then finding nearby public land to take advantage of the lighter pressure and larger animals. It works because deer and elk don’t understand that fences are the borders of their safe havens. They realize that the center of a private ranch is safer, but unless the ranch is strung with a high fence, elk can’t tell the difference between the various four-strand barbed wire fences and they can’t read “no trespassing” signs.

For the highest success, target the densest elk areas in Colorado. According to John Ellenberger, big-game manager for the Colorado Division of Wildlife, the White River National Forest is the state’s elk mecca.

The White River National Forest encompasses 2.3 million acres, approximately 4 percent of Colorado’s total land area. Ellenberger practically begged for hunters to harvest this area’s elk when he said: “Severe drought and the large population of elk are beginning to have a negative effect; as a result, our main goal is to reduce the elk herd.”

According to Ellenberger, the second-best public-land location for Colorado elk hunters is the Bear’s Ears region of the Routt National Forest. This northwestern Colorado forest includes more than 1.1 million acres. The highest density of its elk population resides in an area bordered on the east by the Continental Divide and on the west by the Little Snake River. The Yampa River defines the southern border and the area extends north to the Wyoming state line. The 2002 post-hunt population estimate for this area was approximately 25,150 animals. “What we found was that the pressure was moving those animals from public land to private land,” explains Ellenberger. “To decrease that pressure and keep as many elk on the public land as possible, we implemented draw-only archery and muzzleloader licenses. It seems to be working.”

The San Juan National Forest in southwestern Colorado along the western slope of the Continental Divide is another prime area. It encompasses more than 2 million acres and had a 2002 post-hunt population of 16,710 elk. Like the other areas of the state, this corner also contains a mix of public and private lands. According to Ellenberger, that blend increases south of Highway 160 between Durango and Pagosa Springs.

KNOW WHERE YOU ARE

Although you might encounter more elk when hunting along the fringes of a private ranch, you have the added responsibility of knowing exactly where you are at all times. Colorado does not tolerate trespassing.

“It’s the hunter’s responsibility to know where he is at all times to avoid killing an animal on private property,” says Ellenberger. “Our officers and local sheriff officers are out there to enforce these laws.”

It is illegal in Colorado to trespass, regardless of whether it is posted or not or whether there is a visible fence.

Purchasing two maps and using them jointly will help. First, purchase a U.S. Forest Service map for the specific area you intend to hunt. These maps clearly denote the ownership status between private and public land. The maps show most trails, roads, highways, waterways and campgrounds. Also obtain a United States Geological Survey (USGS) topographical map. USGS maps don’t show private and public land ownership, but they do provide a detailed view of the terrain not seen on the Forest Service map. By comparing the two and transferring ownership information to the USGS map, there should be no question of your location.

The pressure of Colorado’s 200,000 public-land elk hunters creates an unnatural exodus of elk to private lands. Hunt the fringes of private parcels, and you just might find success.