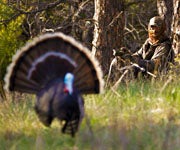 Each February, mere weeks before the nation’s first turkey seasons open in Florida, another title winner is crowned at the National Wild Turkey Federation Grand National Calling Championships. The senior division title is the most coveted accolade in the turkey calling world, and the guys who have earned the honor, besides being the best wild turkey mimics, also know their way around the turkey woods. They have to. After all, the only way to become as good as they are at duplicating the pitch, cadence, and tone of a wild turkey is to have had countless in-your-face encounters with the birds themselves.

With more calling competition wins and dead gobblers to their credit than most of them can count, the following three champions took the time to share their turkey hunting tips with Outdoor Life on how to win in the woods this spring—which, for most of us, is the only place where being a champ really matters.

For Shane Hendershot, competing in turkey-calling contests was almost a fluke. The Zanesville, Ohio, resident grew up pursuing small game and deer. It wasn’t until 1993, when a friend took him turkey hunting for the first time, that spring gobbles “sparked a fire,” as he describes it. In 1999, he entered his first turkey-calling contest on a whim—and won. In 2007, the owner of Hendershot Game Calls won his first Grand National, and in 2011, he did it again.

One of Hendershot’s most deadly tactics, particularly when working henned-up gobblers, is to sound like a flock of turkeys, not just a single bird.
“Sound travels a lot farther on a box or pot call,” says Hendershot, “so I’ll crank on the call and give some excited yelps to get a longbeard fired up and coming my way.”

Once Hendershot strikes one with a friction call, he’ll throw a diaphragm in the mix, often using both at the same time—diaphragm in mouth, box or pot call in hand—to deliver the sonic illusion that he is an entire flock.

“The object is to sound like different birds,” he says. But if the gobbler responds to one call more than the others, lean more heavily on that call. Once the gobbler is within 80 yards, go exclusively to a mouth call. And once the tom is in sight, stop calling altogether.

Hendershot mixes longer, slower gobbler yelps into his calling sequences as well. They can be made by dropping your jaw more than you would when making a hen yelp. Gobbler yelping plays on a boss tom’s sense of dominance, which can often bring him in much faster.

And kee-kees—the lost call of young birds, which is popular in the fall—can be thrown into the mix, particularly when working toms with hens.

Key Tactics
– Use multiple calls simultaneously.
– Add gobbler yelps to the mix.
– Include kee-kees in your repertoire.

Mitchell Johnston from Purlear, North Carolina, is not only a 2010 Grand National Senior Division Champion and 2011 Team Calling National Champion, but he is also the 2009 World Friction Calling champ, which means these calls figure prominently in his hunting and in his company, Dead End Game Calls.

“Glass, slate, and aluminum calls all work best for certain purposes,” says Johnston. Slate is optimal for “wrapping a hunt up” with soft clucks, purrs, and low-volume yelps, while the higher- pitched glass surface is great for pulling shock gobbles from otherwise silent toms. On windy or rainy days, where extreme volume is needed, Johnston busts out an aluminum call.

“There is calling to a tom to hear it gobble and calling to one to kill it. You’re there to do the latter,” says Johnston. In other words, it’s possible to overcall and get a tom gobbling so much that it stands in place waiting on the hen. If a tom begins closing the distance, keep it enticed with periodic calls. If it hangs up in place but continues to respond, give the calls a rest. Often, the silence will get to the bird. Even if it gobbles and is close to you, resist the urge to hen yelp—which may only serve to make it lock up in strut again.

If the tom goes silent for more than 15 minutes, don’t panic and start yelping. Instead, hit it with a locator such as a crow call. If the bird gobbles and has moved closer, stay silent.

For birds that simply refuse to budge, use the terrain to your advantage. In mountainous areas, use the cover of hills to move right in on top of a gobbling tom. In flatter land, use the cover of woods and ditches to slip in tight. The sound of footfalls in leaves often brings a tom running. If not, go to soft yelps. On hilly terrain, set up within shooting distance of the ridgetop. Listen for the crunch of leaves to know where to aim.

Key Tactics
– Use the right friction call for the job.
– Read the bird’s mood to determine how much to call.
– Use terrain to your advantage.

Billy Yargus, the 2008 Grand National Champion, has been hunting turkeys for 34 of his 48 years, and in that time, the Ewing, Montana, resident has learned to apply in-your-face tactics for consistent success in the woods.

“I want to be the very first hen a gobbler hears in the morning,” says the MAD Calls pro staffer. “That often means getting there in the dark and getting within 60 yards of a roosted bird.” To do this, Yargus dedicates time both before and during the season to scout out specific birds and determine where they’re regularly roosting. He may then return during the day while the bird is gone and rake out a path through the woods so he can get close without making noise. Using a small saw, he might also build a natural blind by cutting tree limbs and then sticking them in the ground in the spot where he wants to set up. The blind is tall enough to conceal movement when he calls while sitting, but short enough to swing a gun barrel unhindered when the time comes. By getting tight to a roosted tom, Yargus lessens the number of hens likely to get to the gobbler first.

And the closer a hunter is, the better he is able to watch the bird he is working.

“If you can see a bird, you can tell how it reacts to certain calls, even if it doesn’t gobble,” says Yargus. A gobbler might crane its neck or strut instead of gobbling. Give it a couple of calls to let it know you are there, and when its fan or a limb obscures the turkey’s head, rake leaves and make wing-flapping sounds with a turkey wing to mimic flydown.

“I’ve had birds fly down and come running in,” says Yargus. If a bird refuses to come but goes to the same strut zone every day, have your partner call from where you would normally set up, and go to the bird’s strut zone before sunup. If the tom follows its routine, you’ll kill it; if it goes to the calling, your friend scores.

Another two-man play works when a bird gobbles but doesn’t come closer. One hunter remains in place, calling every five minutes, while the other circles around to the other side of the bird. Slip in tight and throw out a few soft yelps as the first hunter quits calling. The new yelps are in an area where the gobbler is comfortable, so it just might come right to the gun.

Key Tactics
– Get tight to roosted toms.
– Watch how the gobbler reacts to calls.
– Partner-up for hard-to-call longbeards.