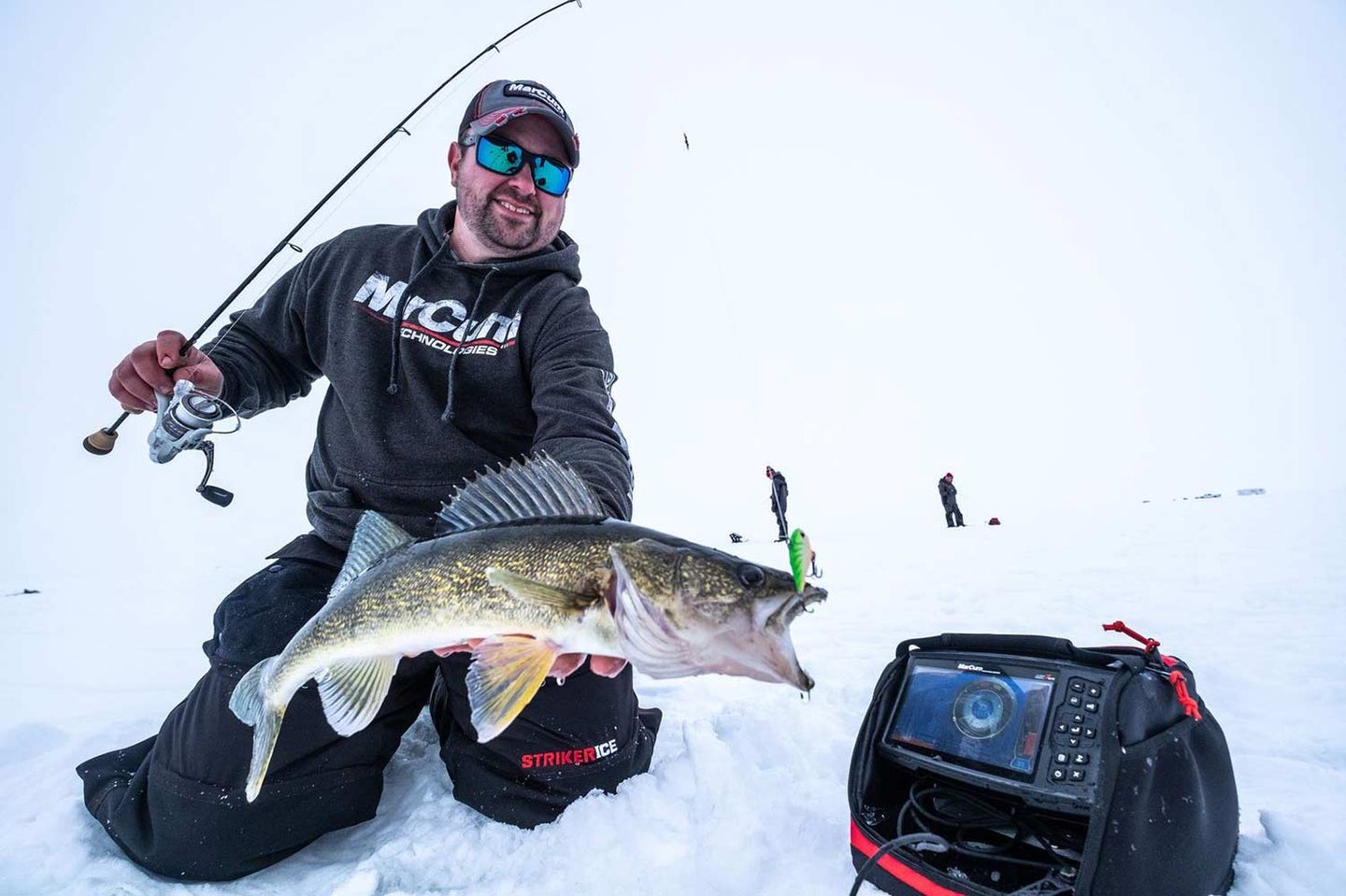 Ice fishing is a great winter activity, but your first concern should always be safety. Joel Nelson
SHARE

It’s hard to believe in late December we are still talking early ice, but in the Midwest unseasonable warmer temperatures have kept water open. Northern Minnesota and North Dakota, however, are experiencing some excellent early ice walleye fishing and the remainder of the Midwest shouldn’t be too far behind, so get those batteries charged and hooks sharpened because ice fishing season is coming. Here are 10 tips that will help you land more walleyes as lakes begin to freeze.

Safety is an important consideration for any sort of fishing, especially early ice. Never venture out without letting someone know where you are going. A good spud bar is paramount for testing the ice but any heavy stick will work. Place your cell phone in a plastic bag, carry a rope along and invest in a reliable ice axe in case you should fall through.

In most cases, ice anglers like to be mobile, drilling holes in the ice until they find fish. That’s not necessarily a bad practice at the right times, such as mid-day or slow bite periods. However, use your fall fishing as a form of scouting. If you found good weed beds and break lines near shore in September and October, target those same areas the first few days and weeks of ice fishing.

You need to be stealthy when fishing early ice, because fish may very well be shallow or on the move as they transition into the coldest water temperatures of the year. There are a lot of new noises, from footsteps to augers, and ATVs coming from above, making these walleye a bit more cautious than usual. Move quietly and minimize noise especially during peak hours such as early morning and evening. Do your best not to move when the fish are moving. As the sun begins to set, you should already have your holes drilled and be fishing at or relatively close to where you expect the fish to be, come evening. Being set up for the fish before they arrive is key to not spooking them out of the area.

4. What Should You Use for Bait?

Bait size is often overlooked by many ice anglers. But it’s pretty simple. Bigger bait means bigger fish. If you are targeting panfish, make sure you are using small baits such as tungsten jigs and small waxies. If you are targeting eater size walleye, you can often get by with a fathead minnow or shiner on a jig, mid-size spoons, and glide baits will put those walleye onto the ice as well. For trophy walleye don’t be afraid to rig up creek chub, red-tails, and larger profile baits such as Rippin’ Shads, Rippin’ Raps, and many of the other lipless style baits. When the bite gets tough, downsize your baits and minimize expectations. Everyday isn’t a trophy walleye day.

Tip-ups have been around for as long as I can remember and they are a great way to cover water and maximize the number of baits you can legally have out. I prefer to fight the fish on a rod and reel versus the old hand lining method. With all the innovations in ice fishing rods, it is easier now than ever. Placing your rod in a rod holder (known as dead-sticking) is extremely effective and many will tell you that their bigger fish came on these setups. A dead-stick rod allows you to see the bite easier. The rod loads up and in many cases will set the hook for you instead of letting the fish swim around freely while getting tangled up in other lines. And when it comes to fighting big fish, you are more likely to land them on a rod and reel combo as opposed to hand-lining a lunker top side. No transducer is needed in the hole of your dead-stick, which minimizes noise and why many believe bigger fish are more likely to bite.

Read Next: This is Your Year to Get into Ice Fishing. Here’s the Gear You Need to Do It

Lively bait can be a challenge when you’re fishing in arctic temperatures. But with all the innovations in insulated and aerated bait stations keeping your water moving and bait highly oxygenated they will remain as lively as they were when you purchased them. It’s usually the angler’s fault for not having lively bait. The cold water temperatures create more viscosity in the water, which means everything moves slower. This is why an active bait can attract a fish to bite from a long distance versus a dead minnow hanging below the ice. Shiners, fatheads, and red-tails are all excellent live baits for ice fishing based on your location. Red-tails are a favorite among Minnesota anglers whereas shiners and fathead minnows, work just about anywhere. Creek chubs are the go to in the Dakotas and when kept fresh and alive they are some of the most active live baits under the ice sure to entice a hungry walleye.

Shorelines are a great starting point during early ice. Most shorelines hold structures such as weeds, rocks, and sand, as well as warmer water initially, making for a great starting point. As the day progresses, look for deeper water nearby such as main lake points and breaks. If you can find a location with a break fairly close to shore this can be the ticket as you won’t need to move a lot throughout the day and you’ll be in the perfect position for when those active walleye move up shallow to feed again.

Weeds hold fish all year long, because they create oxygen, which attracts everything in the food chain. Finding good weeds late in the winter is tough, but early ice weed opportunities can be the ticket. The use of a good underwater camera to do some mid-day scouting for weeds can pay dividends come evening.

The Right Rod For the Job

Just like your bait, you need the right setup for the technique you plan on fishing. A soft tip and longer rod can make for a great dead stick. But you will want a more medium to heavy powered extra fast action rod for larger baits when targeting those trophy walleye. The fast action tip will ensure quicker and more solid hook set. A medium action rod will give your bait the proper action when worked vertically through a hole as well as more control over that tanker walleye to guide it up through the narrow ice opening. The right rod will increase your hookups and your ability to land the fish. The wrong rod will increase your odds of missing bites and weak hook sets resulting in lost fish. When your rod is too soft and the action is too slow it’s very difficult to get a good hook set on a fish as all the backbone and strength of the rod are in the lower third near the reel seat. This backbone is what drives the hook home. These lighter and ultralight rods are best suited for panfish. When targeting walleye a longer rod (32-inches), such as a St. Croix CCI Dead Eye, allows the walleye to bite the bait feeling minimal resistance from the rod allowing it time to “load up.” This type of setup is perfect for a “deadstick” allowing the walleye to devour the entire bait before feeling the resistance and in turn self hooking itself.

As ice anglers, we know the cold well, but far too often anglers are not dressed appropriately. Wintertime temps are seldom stable and in the upper Midwest, you can count on the wind making it much colder than what your weather app forecasted. Once you’re cold, it’s hard to get warm without leaving the ice for a short period of time. Wet hands make it even worse. Packing a small fishing towel can go a long way as well as extra pair of gloves. You will see many seasoned ice anglers overdressed for good reason. It’s much easier to take off a layer than add a layer that you didn’t bring with you. Striker Ice suits has a huge array of floatation suites, bibs, and jackets that also come with many layering options, making them a go-to for ice suits and accessories.