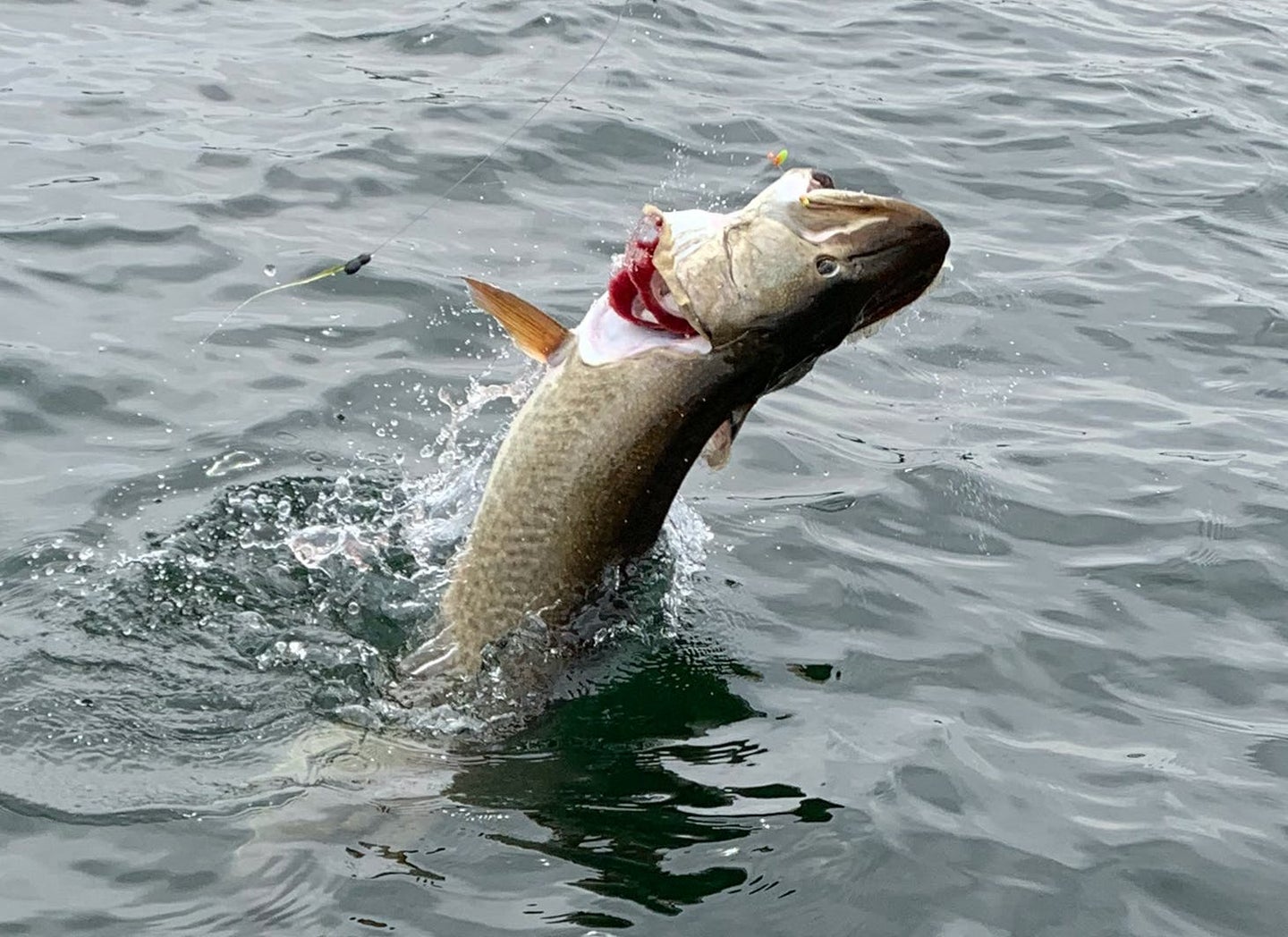 Some anglers spend their entire fishing careers trying to land a trophy muskie—Paul Schiller hooked into one by happenstance. Schiller was fishing for walleye on Minnesota’s Lake Minnetonka in late May with wife Rachel Daly, both of Minneapolis, when he felt a stiff tug on the end of his line.

It took several minutes to get the fish to the boat, but when it finally surfaced, Schiller could see it was a sizable muskie (52 inches to be exact.) Curiously, when he and Daly went to net the big fish, they noticed there was a 21-inch walleye in its mouth. Both fish were hooked solidly to the same nightcrawler harness, with the walleye on the first in-line hook and the muskie attached to the third.

After adding the keeper walleye to their stringer, the couple released the big muskie to fight another day.

“I fish every weekend,” Schiller, 52, told the Minneapolis Star-Tribune. “If I’m not in my boat, I like to fish from shore, beneath dams. I’m almost always looking for walleyes. Never for muskies.

“Five minutes or so passed before I got the fish close enough to the surface to see it was a muskie. I had only 8-pound-test line, so I loosened the drag on my reel. I didn’t want to put too much pressure on her.”

The couple already had a pair of walleyes in the boat when Schiller hooked into his muskie-walleye double around 2 o’ clock in the afternoon. He was fishing a crawler harness, which typically consists of a metal blade at the top of the lure, followed by a sequence of colorful plastic beads to draw the attention of walleyes to the bait. Just past the beads is a hook, then a short piece of line with a second (and sometimes a third) baited hook tied to the end.

“First, to get a muskie to eat a worm almost never happens,” local muskie guide Josh Stevenson told the Strib. “Second, to land a walleye on a separate hook on the same harness, that doesn’t happen, either. Ever.”

Read Next: The Best Musky Lures

At 14,000 acres, Lake Minnetonka is the largest lake in the Twin Cities (Minneapolis-St. Paul) metro area. It is a noted largemouth bass fishery and contains other popular species such as sunfish, perch, crappie and pike. Muskie were established with stockings starting in the 1970s. Minnesota DNR continues to stock muskie and walleye every other year. Muskie are stocked in the odd numbered years, walleye in even numbered years.

The Minnesota state record for muskie is a 57 3/4-inch (55 pounds, 14 ounces) fish caught in 2021 by Nolan Sprengeler on Lake Mille Lacs, breaking a more than 60-year-old record. Minnesota’s previous largest muskie was a 54-pounder caught on Lake Winnibigoshish in 1957.