The whitetail deer is an extremely adaptable animal, with habitats ranging from Texas and Mexico all the way up to... 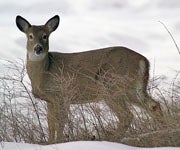 The whitetail deer is an extremely adaptable animal, with habitats ranging from Texas and Mexico all the way up to the bitter cold Canadian province of Saskatchewan. While all whitetails face their own challenges, the whitetails of the north have to battle heavy snowstorms that bury food sources, which can lead to starvation and death.

Gun hunters who are used to purchasing more than one deer license will only be allowed a single tag this season. There aren’t expected to be many licenses remaining after the state’s initial deer lottery.

It’s evident that North Dakota’s deer population is shrinking and changing: With only two hunting units below management goals and a success rate of 52 percent last year — the lowest on record. In the past, hunters in North Dakota could expect a 70 to 75 percent success rate.

There’s been recent discussion on the Big Buck Zone blog about using hunters to control deer populations in suburban areas and invasive species. The flip side of the coin is realizing when the population of game animals has decreased to a point where it can’t handle the same level of hunting pressure as in previous seasons.

The North Dakota Game and Fish Department is on point with its move to decrease deer licenses by 40 percent for the upcoming 2012 season. Fewer tags means less deer will be harvest, and a significant decrease in hunting pressure should give the deer population a great chance of recovering. The wildcard in this is Mother Nature. Mild winters will help the deer find food and survive the tough conditions, but a long winter will put added strain on an already declining population.

How does your local deer herd compare? Do you think your game and fish department is managing the deer population as they should?