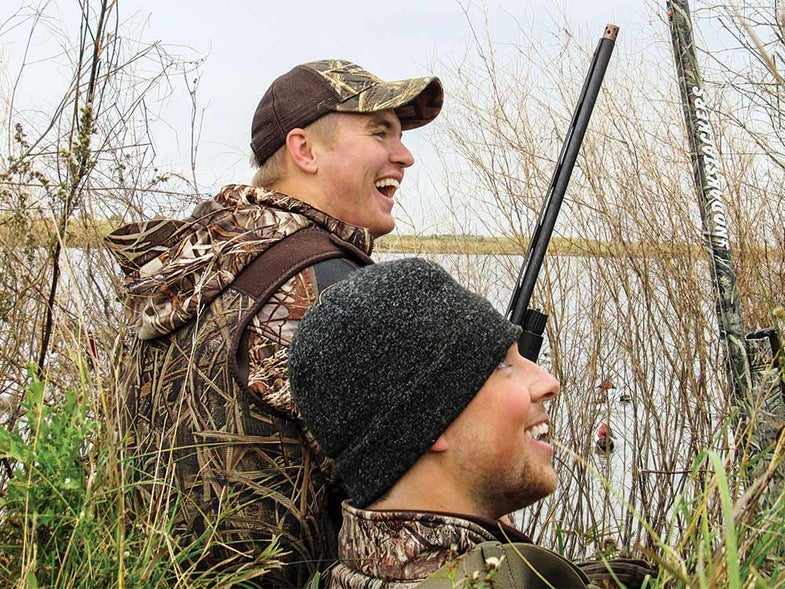 “I’m paying for my own school and all my expenses, so I’m on a very tight budget,” says Kyle Price, an Ohio resident attending West Virginia University. “I probably would not have hunted in West Virginia if I had to pay nonresident prices.”

A year’s worth of small-game, deer, and turkey hunting, along with fishing, would have cost him about $300 in license fees. Thanks to the student waiver, Price paid less than $60.

He is exactly the type of person that former New Hampshire representative Ben Lefebvre had in mind when he sponsored HB 1290, signed into law in 2014. It allows nonresident, full-time college students in New Hampshire to purchase resident hunting and fishing licenses.

“This bill really hit home when I saw it,” says Lefebvre. “I remember what it was like being a poor college kid when I was in school as a nonresident in northern California. I missed out on a lot of hunting and fishing because I couldn’t afford the licenses.”

It’s not just about reducing a financial barrier, though. State wildlife agencies receive matching funds from federal excise taxes on hunting and fishing equipment based on license sales. The more licenses they sell, the more money they get. Nearly half of WVU’s 31,000 students are from out of state. Thirty-seven percent of the University of Michigan’s students are nonresidents, and more than 6,500 nonresidents attend Virginia Tech.

“In New Hampshire, I think our fish and game agency would rather have students buy a license at the resident rate than not buy a license at all. They spend most of the year here, so they are in many ways residents already,” adds Lefebvre.

Twenty-two states offer students hunting or fishing licenses at resident rates or reduced fees. A bill in Alabama is awaiting the governor’s signature.

No one knows exactly how many students take advantage of the license break nationwide, but nearly 2,000 did in North Dakota in 2016. Wisconsin resident John Palarski, a junior at the University of North Dakota, was one of them. He probably would have purchased the necessary nonresident licenses, he admits, but his hunting would have been restricted. Nonresident waterfowl hunters can hunt for only two weeks, and they can’t apply for swan tags, for example. Palarski, a wildlife biology student, drew a swan permit three years in a row, and he hunted at every opportunity.

“The resident license definitely allowed me to hunt a lot more. I know a bunch of other students from Minnesota and Wisconsin who also came to North Dakota because of the hunting and fishing,” he says.

North Dakota Game and Fish spokesman Craig Bihrle can’t say if any nonresident students attend college in North Dakota solely because of the price break, but it certainly might play a role.

“It could be that many of these students came to North Dakota with their friends to hunt when they were young and they have good memories of it,” he says. “The reduced license cost is just part of the enticement to come back.”

In an effort to increase hunter retention numbers, several states (shown here in blue) have granted resident status to visiting college students. The information here—used with permission from the Congressional Sportsmen’s Foundation—was accurate as we went to press. An Alabama bill is awaiting final approval. Check state regulations for changes before going afield.

1. Montana
Nonresident college students can’t purchase licenses at the resident price, but they can purchase a hunting-fishing combo license at a price substantially discounted from the base nonresident price.

2. Wyoming
To receive resident status, a student must domiciled in Wyoming for one full year (365 days) immediately preceding the date of making application for or purchasing a license, and the person makes no claim of residency elsewhere for any other purpose during that one- year period.

The 35 Best Hunting and Fishing Towns in the US

4. Utah
A nonresident attending an institution of higher learning in Utah as a full-time student may qualify as a resident if the student has been present in Utah for 60 consecutive days immediately preceding the purchase of the license or permit and does not claim residency for hunting, fishing, or trapping in any other state or country.

5. Tennessee
The Volunteer State grants temporary resident status if the student is enrolled in a Tennessee school, college, or university for at least six months prior to the license application.