ATVs and Hunting: Ride Where You Can, Then Start Walking

All-terrain vehicles can be a great tool for hunting, but I would wager that there are an equal number of... 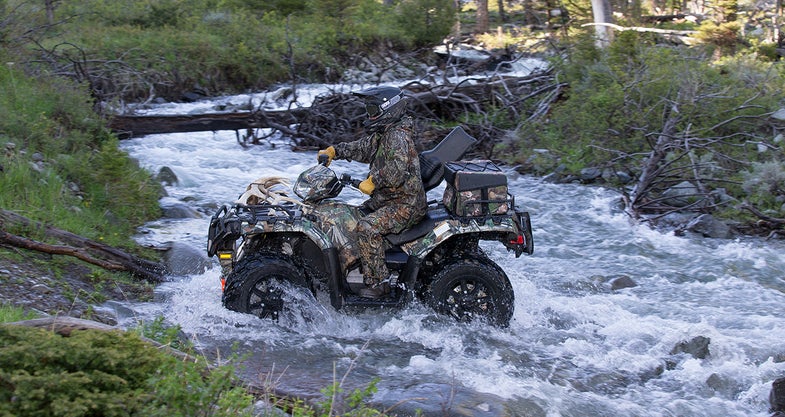 All-terrain vehicles can be a great tool for hunting, but I would wager that there are an equal number of outdoorsmen who share the same peeve I do: “hunters” whose rear ends never leave the seat.

Not only where I hunt, but across the nation, ATVs can be a huge help, allowing you to hunt areas that otherwise would be inaccessible. But to me, your four-wheeler is a tool for getting you where you hunt, not as a tool for actively hunting from.

Here in Alaska, an army of camo-clad folks take to the trails during hunting season with a wallet full of harvest tickets, hoping to fill their freezers. Many never leave their machine and simply count on driving up on a moose or caribou. Although it happens on occasion, if that’s the extent of your hunting technique, it’s more likely that you’ll go home empty-handed.

Driving around on your ATV looking for animals isn’t much different than hunting out of your pickup truck. You are very unlikely to fill your tags for a couple of reasons. Animals can hear you coming. In the woods, I can usually hear a four-wheeler coming for several minutes. I’d bet that a moose or deer can hear it for quite a ways longer than that. Often, animals that hear ATVs coming will hold still or even lie down until it passes, then go about their business. Also, when you’re riding along, you have a much lower awareness of your surroundings. You can’t see or hear nearly as well when you’re focused on the trail.

You can greatly increase your odds of success if you use your wheeler to get you to areas that you can glass, then do your actual hunting—seeking and approaching animals—on foot. Or you can ride to the end of the trail and take off walking to get out beyond the heavily pressured areas. You’ll be more successful and have a much better experience. You want to actually ride your ATV as little as possible because the more time you spend riding it, the less effective hunting time you have.

Then you can employ the ATV for the role that I think it’s best for: helping pack your game out of the woods. I know that after a long hike under a heavy backpack, I’m happy to see any tool that will get me and my meat to the trailhead.

There’s nothing wrong with ATV’s, but before you roll out into the woods, keep in mind that it’s just a tool, and don’t be afraid to get on your feet. In the places I hunt, silence isn’t just golden. It’s also deadly.