Truck Review: Ford’s Maverick Is a Dual-Purpose Truck You Can Actually Afford

The Maverick is a compact, useful truck with a $20,000 price tag 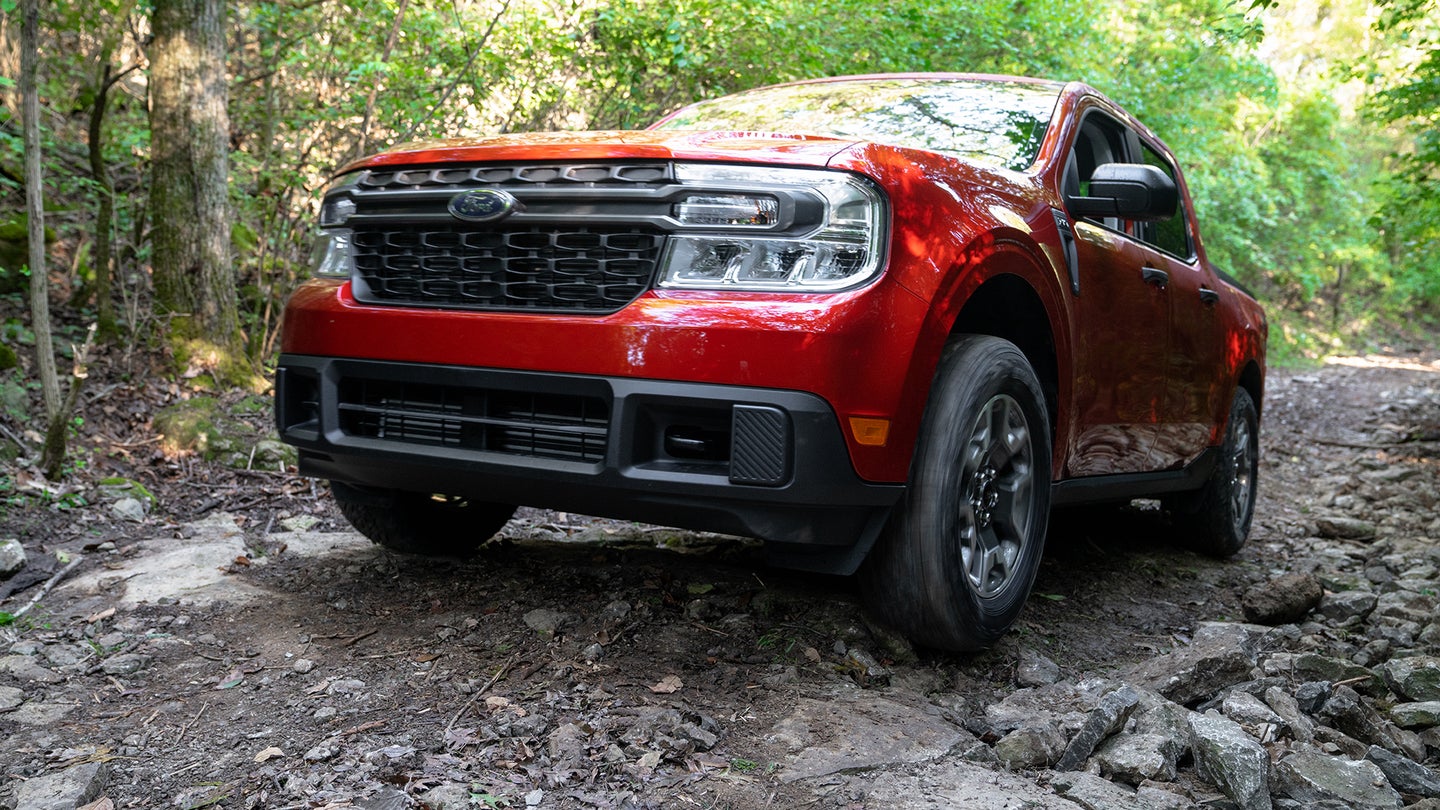 The Maverick is idea for hunters who live in urban areas. Ford Motor Company
SHARE

One of the barriers for folks looking for a new truck is affordability. Half-tons regularly list for $50,000 (or more) and even mid-sized trucks, like Toyota’s Tacoma or Chevy’s Colorado base trims can cost upwards of $30,000. That forces most truck drives to look at the used market, where buyers can find vehicles for half the price. But of course, if you can buy new at a reasonable cost, you likely will. Ford smartly realized there’s a gap in the affordable truck market and introduced the Maverick in 2021, which can be had for under $20,000.

The Maverick Is a Multi-Purpose Truck

Not every hunter is looking for a full-size truck. Many of us, especially those who live in urban areas, want a hunting vehicle that has sufficient cargo room (i.e. a pickup bed we can hose out after hauling a field-dressed deer home), decent towing capability, and the ability to travel down trails and two-tracks. On the other hand, the reality of living in the city or surrounding suburbs involves navigating rush-hour traffic, parallel parking, narrow streets, and surging gas prices. Finding something that can perform in both worlds is tough. Finding that vehicle for under $20,000 has been near impossible unless you’re looking at the used market.

The Maverick was promised as new breed of pickup that’s easier to navigate around town than any open-bed vehicle since the short-lived Subaru Baja. I had the chance to put the Maverick to the test. Here is how it performed.

A First Look at the Maverick

When I first laid eyes on the Maverick, I was struck by the fact that it didn’t seem as small as expected. It’s compact, no doubt, but not miniature. It wasn’t fragile or cheap. It was also clear that Ford hadn’t tried to simply shrink down its Ranger. The Maverick is its own truck.

Looks are promising, but trucks are made or broken in the details. There, the Maverick is full of little victories. The plastic interior doesn’t just save money, it’s durable and it makes the vehicle easy to clean. Exposed hardware is less expensive and more durable than flimsy plastic clips, and owners who do their own maintenance will appreciate having easy access to components behind the interior bodywork. Even though the Maverick uses unibody construction (resulting in a smooth ride), individual body panels can be removed to save money on repairs and, by extension, insurance. Vehicles with the XLT and Laramie trim level get alloy wheels, but the steelies on the XL are timeless classics.

Cargo space is maximized by taking advantage of under-seat storage and a few clever design tricks. For example, the tailgate can be positioned part-way open to match the height of the wheel wells. That creates a level surface big enough for a sheet of plywood. Hooks on the side of the tailgate make securing the extended load easy, and a newly-designed hinge keeps the tailgate from coming free like a traditional tailgate.

Inside, the cab is relatively roomy. If you want to add things like a trash can, extra cup holders, or hooks to secure grocery bags, Ford sells a 3D-printed accessory package for $50. You can also scan a QR code under the back seat to access the files and print the accessories yourself at no charge.

Hunters considering the Maverick will get a truck that can haul their gear, but it won’t tow gooseneck trailers or be capable of any extreme off-roading. It’s essentially a small SUV with the added practicality of a truck bed. Ford aims to meet that need with the Maverick’s combination of impressive fuel economy and a low price tag paired with respectable towing and off-road abilities.

What Ford Got Right With the Maverick

One of the first questions hunters and anglers are likely to ask is whether or not the Maverick can hold up to the demands placed on a hunting truck. During the Maverick press launch, I drove on busy city streets, winding country roads, and a hilly off-road course. Ford also put the Maverick through 19 million miles of testing. Any vehicle can be broken, but you should be just fine as long as you use the Maverick for its intended purpose. I’d call it a city truck with dirt-road capability. It can also handle rocky trails, plus a truck this light is better-suited to mud because its weight won’t bog it down.

The FX4 Off-Road Package is the most rugged option and includes all-terrain tires, exposed tow hooks, skid plates, hill descent control, a trailer hitch receiver, improved cooling, and additional drive modes for sand and mud or ruts. I approached the rocky hill climb once with a fair amount of speed to test the suspension and once at low speed with several stops to see if the Maverick could get itself going without the aid of momentum. Neither test fazed the little truck, and I left feeling confident that light off-roading wouldn’t be an issue for hunters.

Towing was similarly easy. I drove a hybrid with a maximum load of 2,000 pounds (two jet skis) and an EcoBoost with its maximum load of 4,000 pounds (two ATVs). The weight was noticeable in both cases, but certainly nothing to be concerned over. Compared to other mid-sized trucks, the Maverick is significantly narrower, so you will have to adjust your understanding of where you are on the road with a standard-width trailer. The biggest towing surprise came with the hybrid Maverick. All that weight affected power delivery, but not braking distances. The regenerative braking system assists the brakes as it captures energy during stops.

The Maverick is also sized right. The segment is already growing, and it’s nice to see trucks this small make it to the U.S. market. Some of the most challenging terrain urban outdoorsmen face isn’t rocky ground or deep mud—it’s gridlock traffic and limited parking at their apartment complex. The Maverick is 199.7 inches long, 72.6 inches wide, and no more than 68.7 inches tall. That’s about 13 inches narrower and 11 inches shorter bumper-to-bumper than the already compact Ford Ranger.

The best thing about the Maverick is the price. Hunters with healthy budgets have always had plenty of options, and now those with less to spend can shop new as well. Would I rather have a Ford Raptor, Dodge Ram TRX, or heavy-duty diesel truck? Sure, but most people (myself included) can’t afford that and have no need for those trucks’ capabilities. The Maverick offers a usable bed and reasonable utility for a starting MSRP of just $19,995. You can add every available option onto the Maverick and it still won’t cost more than $35,000.

Where the Maverick Falls Short

Space is the Maverick’s biggest challenge. Even though Ford pulled out all the stops to maximize the available cargo room, it’s still a compact truck and buyers have to be realistic about what they want to carry. A pallet of mulch is no problem. Neither is a trailer with a pair of ATVs. Pulling off a week-long hunting trip with your buddies and all their gear might not be in the cards, but a solo mission is no problem. Divided cargo spaces under the rear seat mean long guns will have to lay across the floorboard. Gear for three or four hunters will likely fill the bed. Maybe that can just be an excuse to spring for the 4k tow package and a camper trailer.

The Maverick can handle the kind of off-roading most hunters encounter, but it’s certainly not a full-size truck or Bronco. It just doesn’t have the power, clearance, or articulation needed for technical trails. Still, 8.6 inches of ground clearance is nothing to scoff at—that’s more than you’d get from many larger SUVs. The sand and mud/ruts drive modes included in the FX4 package make the most of the intelligent all-wheel-drive system. Metal skid plates keep the Maverick’s underbelly protected and have holes to allow for easy DIY oil changes.

Read Next: The Best Used Trucks for Hunters That Cost Under $15,000

How I Would Spec the Ford Maverick

This may come as a shock, but I’d buy the Maverick with the hybrid engine and base trim. That’s where it’s at its best. I love how affordable Ford made this vehicle, and the base trim level accomplishes things I’m not sure you can find anywhere else.

Getting a brand-new vehicle with an MSRP under $20,000 is great on its own. Cost-cutting measures like plastic interior panels, exposed fasteners, and steel wheels only add to the Maverick’s appeal. Then there’s the fuel economy. During an hour-long drive through downtown Nashville and into the rural county roads, I averaged 52 miles per gallon on the dot. Thanks to regenerative braking, my estimated range increased from 396 miles to 412 miles.

The base model is nowhere near as capable in the dirt and snow as the EcoBoost paired with the FX4 Off-Road Package, but I’m confident that a set of aftermarket all-terrain tires would get me most places I need to go. I don’t have anything heavy to tow, so the 2,000-pound limit would be adequate for occasional trips with a rented trailer.

If you do need more off-road capability and to tow heavier weight then upgrade your Maverick with the $800 FX4 Off-Road Package and the 4k Tow for $745. Putting both those packages on the XLT trim level still results in a truck that costs under $30,000.