Populations of wild animals are constantly in a changing state. Over the course of a single year, a local population... 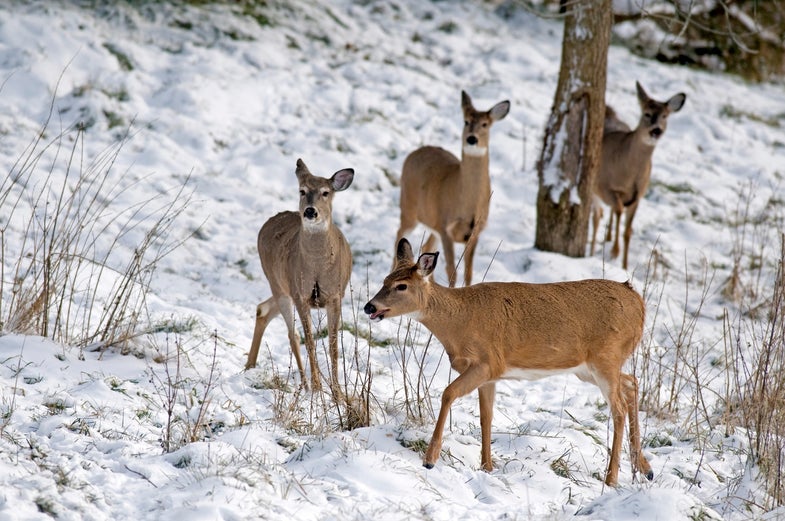 Populations of wild animals are constantly in a changing state. Over the course of a single year, a local population of deer (or elk, or squirrels, or even catfish) will experience periodic increases as young are born (or hatched) or new individuals travel in from another region. Within that same year, that population may experience decreases from death due to harvest or natural causes and individuals leaving the area in search of a new home.

This constant ebb and flow in the number of individuals, and the age structure of the local community, is known by wildlife biologists as population dynamics.

The processes that impact population dynamics can be broken down into four separate categories: births, deaths, immigration, and emigration. To better visualize these four processes, imagine a small rural town. In this instance, the small town represents a regional population. During one year in that small town, the neighbors down the street had a pair of twins (births), but unfortunately the man across street passed away (deaths). Your co-worker just received a promotion that required her to move to the next town over (emigration), but by the end of the year a new family moved into her old house from out of state (immigration). The population in the small town is constantly changing over time, sometimes hitting new highs when a new factory opens and creates jobs or plummeting to new lows when that factory closes or lays off workers.

Wildlife biologists use a few additional terms to describe those four population processes. When discussing births, two terms are often used: fecundity and recruitment. Fecundity is the reproductive rate of an individual or the population as a whole. Fecundity is similar to a birth rate, but can vary with changing environmental conditions. In times of drought or low food resources, the fecundity of the population may decrease since a mother cannot acquire enough resources to create or care for young, and in times of resource surplus, fecundity may increase.

Recruitment refers to juveniles who survive into adulthood and become permanent members of the population. For example, a doe may have two fawns, but only one of the two fawns may survive through its first year. In this case the fecundity and recruitment of the population would be different.

In the example of the fawns, one of the fawns did not survive, representing a death in the population. Deaths do not only occur to juveniles; adults can also be removed from the population, whether it is by hunter harvest, predation, or other natural causes.

Mortalities that occur via hunter harvest or predation can be divided into two separate categories: additive or compensatory. The difference between those two categories was previously addressed in my Game Changers post “5 Wildlife Biology Terms Every Hunter Should Know.”

Immigration and emigration are not only key processes in population dynamics, they are essential for the long-term survival of a local population. Much like humans, individuals may enter or leave a population when pursuing better resources. For people, that may mean a nicer house or a better job, while with animals that may mean better access to mates, less competition for resources, a decrease in predators, or a number of other things. What is important about immigration and emigration is that as individuals move between populations they increase gene flow. Gene flow is the transfer of genes from one population to another. As gene flow increases, so does the genetic diversity of the population, and genetically diverse populations are more capable of withstanding environmental change (drought, for example).

The main take-away from this little lesson is that wildlife populations are ever changing, and those changes can be subtle (just a few individuals) or obvious (population collapse). It is important to remember a number of processes impact the size of the population, and a population needs all four of the factors—births, deaths, immigration, and emigration—to maintain long-term viability. By recording harvests, counting juveniles, identifying new individuals, and noticing when familiar faces (and antler configurations) disappear, a sportsman can get a better grasp on the current state of wildlife populations.