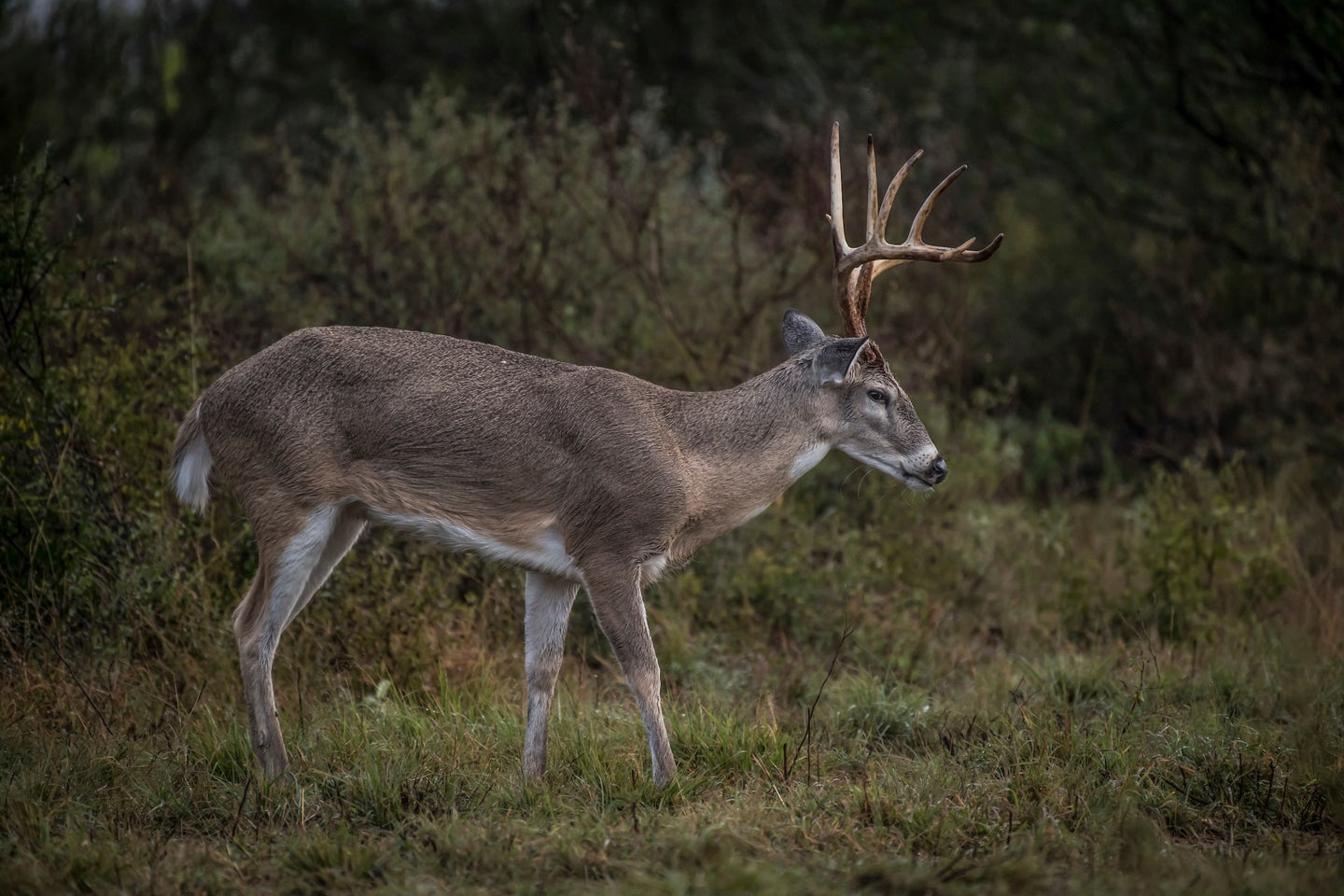 Chronic Wasting Disease has been found in Texas whitetails for decades, but the recent news about the disease rapidly spreading through Texas deer breeding facilities is raising concerns across the country. This latest CWD development could be a massive problem for the Texas deer breeding industry which supports a $1.6 billion economy, but also Texas hunting overall, which is made up of more than 1 million deer hunters.

CWD is a brain-eating disease caused by abnormal proteins called prions and is highly infectious to cervids like deer, elk, and moose. Wildlife professionals across the country describe CWD as the most important disease threatening North American cervids.

So, when two different deer breeding facilities located in two different counties (Hunt and Uvalde) tested positive for CWD, wildlife officials launched an epidemiological investigation. Shortly thereafter, two more facilities in Matagorda and Mason counties and another facility in Uvalde also confirmed the presence of CWD. Mitch Lockwood the Big Game Director for Texas Parks and Wildlife said, “Five facilities seem to be all connected through the transfer of live deer, but we have not been able to trace the source of the sixth facility.” But what really keeps Lockwood up at night is that “Some of the diagnostic results from deer at the index facilities show that they have had CWD for over a year” he says. In other words, it’s likely that the disease is even further widespread.

Thus far, the investigation has identified 267 sites that received deer from the six positive facilities. Of those 267 sites, 101 are release sites, a total of 1,153 deer have been released in places like game ranches and hunting preserves that range anywhere from a few hundred to several thousand acres, making it nearly impossible for wildlife officials to track down and test all the deer that have been exposed. The worse-case scenario is that all the deer in the game ranches will contract CWD and increase the disease transmission risk to wild deer herds. The only thing that separates captive bred deer and wild deer from intermingling are a network of wood posts and wires crisscrossing the property boundaries that are not 100% impenetrable. Deer can easily get through broken sections of a fence if they are not maintained, especially after windstorms knock trees down or snow drifts snap wires.

The limiting factor in managing CWD for captive and wild deer, is the ability to test for it. Live animal tests are available, but they are more expensive and not as accurate as the traditional method that requires the animal to be dead for tissue samples of the brainstem or lymph nodes. Both tests take anywhere from two to five weeks to be processed. If infected animals are moved from any of the facilities in the time it takes to get a result, they could also expose deer that are still being legally moved around the state. That is what many folks in Texas are worried about.

“There is a batch of potentially exposed breeder facilities that are currently allowed to move and release deer. We need to have regulation in place that would stop this movement of deer until we know how big this problem is or it could only get worse,” says David Yeates of Texas Wildlife Association. But for rural Texans who depend on the deer breeding industry to survive, a travel restriction on deer would make doing business difficult and could potentially impact the $1.6 billion that the industry contributes to the Texas economy every year.

But what remains a mystery is how CWD got into the breeding facilities in the first place. The breeding facilities were required to test their dead deer on an annual basis. In November of 2021 a new rule approved by the Texas Parks and Wildlife Commission required breeders to instead send in samples for testing within two weeks of a deer’s death. In March, that rule took effect, but that wasn’t in time to prevent the spread to at least two more breeding facilities. While it is unclear the exact source of the CWD outbreak, experts agree that the CWD prions can travel through many vectors, such as saliva and even soil. Breeding facilities using the same wranglers (cowboys for deer) could be transferring it from place to place through the soil and mud on their vehicles and boots. Another preliminary study found that some plants will bind the prions and if an animal eats that plant, they could contract the disease. Other emerging research shows that CWD transmission could be possible through reproductive tissues (i.e., semen and embryos) used for artificial insemination between deer farms. When CWD positive deer die, whether they are in the wild or in farm, scavengers like crows who eat the most infectious tissues (eyeballs and rectum) as well as coyotes can also spread the prions across the landscape. It’s still unclear how much of a transmission risk these vectors pose. For example, we don’t know if saliva is more infectious than poop and if that varies among age classes of animals. While unlikely, some people think that CWD could have been spread from intermingling of free-ranging wild deer although no official report of this has been filed.

A Cause for National Concern

Many hunters and conservationists are concerned about the spread of CWD in wild deer and the ramifications it could have. Lockwood says, “research done in other states shows that population level impacts from CWD in wild deer can occur.” While there are no cures to CWD, the solution is to have comprehensive management plans in order to reduce the spread.

Last week, 80 individuals and groups comprised of landowners, biologists and hunters signed a letter to the Texas Parks and Wildlife Commission urging them to increase testing requirements for the deer breeding industry and enforce suspensions or shut down non-compliant breeders. Lockwood says there needs to be “some serious discussion about containing this disease so it doesn’t go undetected” …” We need to ask ourselves if live testing animals is sufficient, if 80% post-mortem testing is really enough, and do we need to increase hunting carcass restrictions and testing, etc.” Beyond hunting, breeding, and testing regulations, other types of increased surveillance of disease vectors like road kill could help with early detection and management of CWD in wild deer.

In addition to tightening regulations, “There is one other emerging solution for the deer breeding industry, the ability to breed CWD resistance deer.” says Shawn Schafer the Executive Director of the North American Deer Farmers Association. New research found that there are genomic predictions for risk of CWD in whitetail deer meaning that breeders could test their herd genes and breed only the animals that are most resistant to the disease. But ensuring the test is affordable and reliable will take a few more years.

In the meantime, Texas Parks and Wildlife is racing to trace and test as many deer as they can and it’s racking up a hefty bill. “I am pretty nervous about whether or not we will have sufficient funds to manage this.” Lockwood says. “If you would have asked me six months ago, I would have said yes, but now as this situation continues to unfold, I’m concerned.”

As the CWD situation in Texas continues it may just be the tipping point for federal action. Earlier in the spring, two other states, Minnesota and Pennsylvania reported similar outbreaks at breeding facilities prompting a coalition of nation-wide conservation and sportsman’s groups to call on Secretary Vilsack of the U.S. Department of Agriculture to take action.

“We are urging USDA to implement a moratorium on the interstate movement of all live deer and convene an emergency meeting of the CWD interagency task force which was authorized by Congress through the America’s Conservation Enhancement Act in 2020 to develop an immediate federal response to contain CWD,” said Andrew Earl of the Theodore Roosevelt Conservation Partnership. “Texas has one of the more robust management plans in place for CWD… as a state they have done really well managing it so this most recent CWD outbreak really speaks to the challenges that even the most well-equipped agencies face as they try to track and manage this disease.”

For more information about CWD in Texas and to track the recent outbreaks, visit the Texas Parks and Wildlife CWD Informational Hub.