Finding a Middle Ground on Wolves and Wolf Management

Values and opinions differ when it comes to America’s most controversial predator, but we should all agree on the following wolf facts 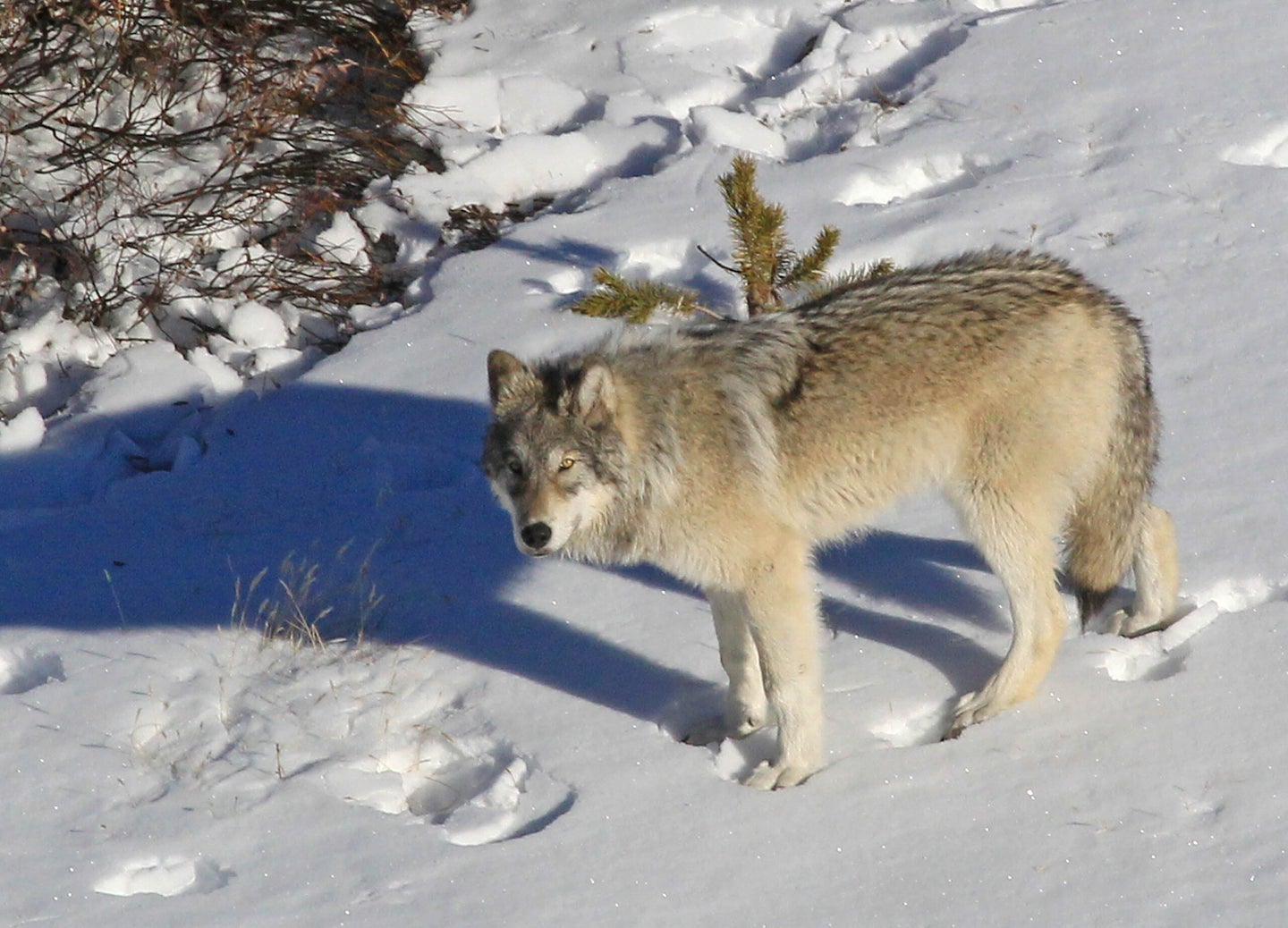 Wolves are the most controversial predator in America. National Parks Service
SHARE

I recall the first time I cut wolf tracks on a frozen river in the Canadian Rockies, following the lone animal on my cross-country skis for a full day, hoping for a glimpse. It was a heady experience for a 19-year-old raised on Jack London novels.

Now, 33 years later, there is no novelty in wolf tracks where I live in northwestern Montana. Wolves have gone from ghostlike rumors to commonplace. These days it’s rare to go out in a fresh snow and NOT see wolf tracks. The natural world has changed dramatically.

The political world changed along with it. Americans are polarized. Nowhere is this more evident than regarding wolves. My neighbors have license plates that read “WolfH8R” and bumper stickers urging folks to “Smoke a Pack A Day.”

Camps are staked out as pro-wolf or anti-wolf. But wildlife management happens in the real world. Even in a snowy forest, black and white fade to shades of grey.

After I wrote about wolves, one of my readers called wolves vermin that needed to be eliminated. “As a hunter,” another reader asked, “why would you even want them around?”

My answer is, because hunting to me is more than meat in the freezer. When I hunt ducks, I enjoy watching eagles pass over my decoys. If I ever make it to Africa, would it still be an adventure without lions or leopards?

The wolf debate comes down to personal values. We are not going to argue each other out of our values. They are too much a part of us. But if there are some basic facts we should all agree on.

FACT: Wolves are here to Stay and Perhaps Near You Soon

In my corner of Montana, we’ve gone from scattered single wolves in the 1980s to a population of 800-900 wolves today, according to hunter-based Fish, Wildlife & Parks Department surveys.

Before 2011, wolves were listed as threatened under the Endangered Species Act. Now, hunters and trappers legally harvest 300 wolves per year. Heck, a wolf was photographed running on the playfields at my son’s middle school. And it’s not just Montana. Wolves are expanding in the upper Midwest, Rocky Mountains, and Pacific Northwest and are even sniffing around Colorado and California. It is a true conservation success story. But one that seems to leave no one satisfied.

FACT: Wolves are Neither Demons nor Gods

In our imagination, wolves symbolize ideas. When we disagree with agency direction, wolves become symbols of the government. To others, wolves are symbols that Nature was tamed for progress, the work of our grandfathers, turning America into the breadbasket for the world. Others tend to glorify wolves, as if they could lead the path back to Eden and strike some mythological “balance of Nature.” Lost in this is the fact that wolves are just wild animals making a living, who do not ask to be made into idols or villains.

FACT: Wolves Can Impact Local Big Game Herds, but on a Larger Scale Big Game can thrive Amid Wolves

Deer and elk numbers are like the stock market – they go up and down. When populations decline, predators are handy to blame. But wolves have lived beside elk, deer, and moose for hundreds of thousands of years. If wolves were an existential threat to elk or deer, the prey would have disappeared long ago. Wolves have been back in Wyoming, Idaho, and Montana for 30 years and elk and deer hunting is still quite good. My home, Montana’s Flathead County, is Ground Zero of predators: public land chock full of not just wolves but mountain lions, lynx, bobcats, coyotes, black bears, and grizzly bears, all happy to dine on venison. Yet I fill my deer and/or elk tags pretty much every year. The one or two seasons when I was skunked came on the heels of hard winters. Don’t get me wrong, there are scattered hot-spots in wolf country, such as Idaho’s Lolo region, where game populations have taken a dive and predators are a part of that.

Game is not equally abundant everywhere, but overall, deer and elk still thrive in spite of wolf recovery. In the big picture, wolf populations rise and fall on their prey and the prey depends on habitat. Often, the best way to “manage” the impacts of predation is to make sure female deer and elk are fat and healthy, so they produce big, robust fawns and calves.

Hunters right now have it good. We’ve invested decades and dollars into restoring elk and deer herds from historic lows. Biologists estimate there are more deer today in America than when Columbus arrived. For good reason, we don’t want to gamble that away. Hunters also tend to be conservative—not just politically, but skeptical of change. South of Canada, wolves are something new again. In parts of Idaho and Montana, mountain lions kill more elk than do wolves, but wolves get most of the attention. Part of the reason why is that wolves are perceived as novel, while lions have “always” been here.

Some folks who like wolves cringe at the idea of wolves being trapped or shot. For those folks, a wolf is just a wild version of America’s favorite animal, the dog. But the fact is, wolves are not pets. They die of starvation and disease, and are killed by rivals or injury long before they reach old age. In Yellowstone National Park, where hunting is banned, the number one killer of wolves is rival wolves, where around 65 percent of radio-collared wolves die from other wolves.

From a biological perspective, it makes no difference if a wolf is shot by a hunter or killed by more “natural” means. Folks who fret when “celebrity” wolves die near Yellowstone should feel better knowing that the wolf population overall is doing just fine.

FACT: Some Wolves Die for the Good of the Population

Not all wolves get into trouble, killing pets or livestock. Only a small percentage do. That is small consolation when your steers are disemboweled or your dog torn to pieces. In order for folks to support having wolves living nearby, some “problem” wolves will need to be killed. This is a hard pill for some wolf-advocates to swallow, but it’s the hard truth.

FACT: Wolves are not a Real Danger to People

Back in the 1990s, politicians warned that kids would be killed at school bus stops if wolves were to return to the West. That’s fear-mongering. All animals, particularly predators, need to be treated with respect and have the capacity to hurt people. But wolves are not a major threat to humans. Their instincts to survive are simply too strong. There are recent cases of wolves attacking people – as there are cases of foxes and raccoons doing the same. But those are the exceptions that prove the rule. People need not fear they are in danger.

Read Next: Colorado Braces for Wolves as Politics Clash with Wildlife Management

FACT: Wolves Can Thrive Without Endangered Species Act Protections, Even When Hunted and Trapped

Even fairly aggressive regulated hunting and trapping wolves may make no difference on total wolf populations (I’ve confirmed this fact with one of the nation’s top wolf experts). Wolves are prolific and to curb their populations managers must remove 50 percent of a population every year for years on end. That is enormously impractical – and a waste of money — in much of the wild. Wolves are hunted hard in Wyoming, Montana, and Idaho but still are providing seed stock for recolonizing Oregon, Washington, Colorado, and even California.

FACT: Wolves are Wildlife too

In many ways hunters set the table where wolves dine. In America, we hunters are proud that we foot the bill for conservation and that we support the habitat that produces abundant deer and elk. Conservation-minded hunters talk about the public trust doctrine and that wildlife belongs to the people, not to royals or elites. But there is a flip side. Non-hunters also own the wildlife and share an interest in its fate. While some people may see wolves as vermin, many more put a high value on wolves. Wolf advocates would do well to remember that the animals wolves prey on exist because of hunter-funded conservation and management. But hunters are wise to remember that we are all in this together and need the support of the non-hunting public if our cherished traditions (and wild lands) are to continue.

If you go to a local fish-and-game hearing in my town and wolves are on the agenda, you can bet rhetoric will be hot and well-rehearsed. I respect the passion. But I wonder about the priorities. In this region of Montana, there are 500,000 acres of former timber land – habitat where families hunt elk, deer, moose and bear – that is soon to be sold. If hunters are not organized, we will see that land locked away forever behind no-trespassing signs and trophy homes. Yes, wolves represent new competition for human hunters, but that will balance out over time. Conversely, once that access to habitat is lost, it remains lost forever.