This past Tuesday I had the privilege of fishing with Captain John Moehlenbrock on Lake Mead just outside of Las... 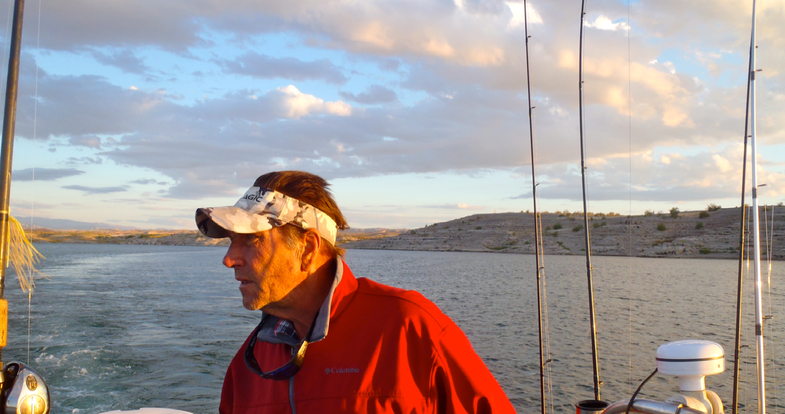 This past Tuesday I had the privilege of fishing with Captain John Moehlenbrock on Lake Mead just outside of Las Vegas, Nevada.

It was good to escape the dizzying lights of the strip for sunrise surface action to breaking striped bass on the enormous reservoir.

John grew up in Minnesota, but had since become “a desert cat,” by his own admission. “Some people say it’s a lot of nothing, but some people, I’ll take them out here and they’ll say it’s the most beautiful thing they’ve ever seen,” John said. “And at times it is.”

Film director and writer Aaron Rose once said: “In the right light, at the right time, everything is extraordinary.” Sometimes the extraordinary is more subtle than the blinding lights of the Bellagio, but no less profound. Lake mead was a massive mirror in the crisp October air right before sunrise.

With a slap on the back at 5 a.m., where we met in a Wal-Mart parking lot near the launch, John was quick to explain to me that he was going deaf. He couldn’t hear at all in one ear. “It’s hell getting old,” he said.

But the lack of hearing isn’t the harshest blow time has dealt John. He had lost his wife to cancer less than a month before we fished.

I reminded myself to yell when I needed to ask John a question, but for the most part it was a quiet day on the water, as some are. We caught some stripers on top at first light, then we picked away at a few more with live bait once the desert heat set in in the afternoon. John heaved the castnet to gather some gizzard shad, even though he said a nagging cold had him weakened.

“It’s just me and the cat now,” John said as we headed in.

John Gierach, a man who wrapped words around the water better than most, wrote that “Life is an unruly mess and ideals are hard to hold onto, but fishing is an isolated enough slice of it that there’s hope we can do this one small thing perfectly.”

The ups and downs I’ve encountered in 24 years likely pale to the ones that lie ahead, but with help from fishermen like John, I’m learning that life changes, comes and goes, but the water stays put.

Tuesday was a good day on it.