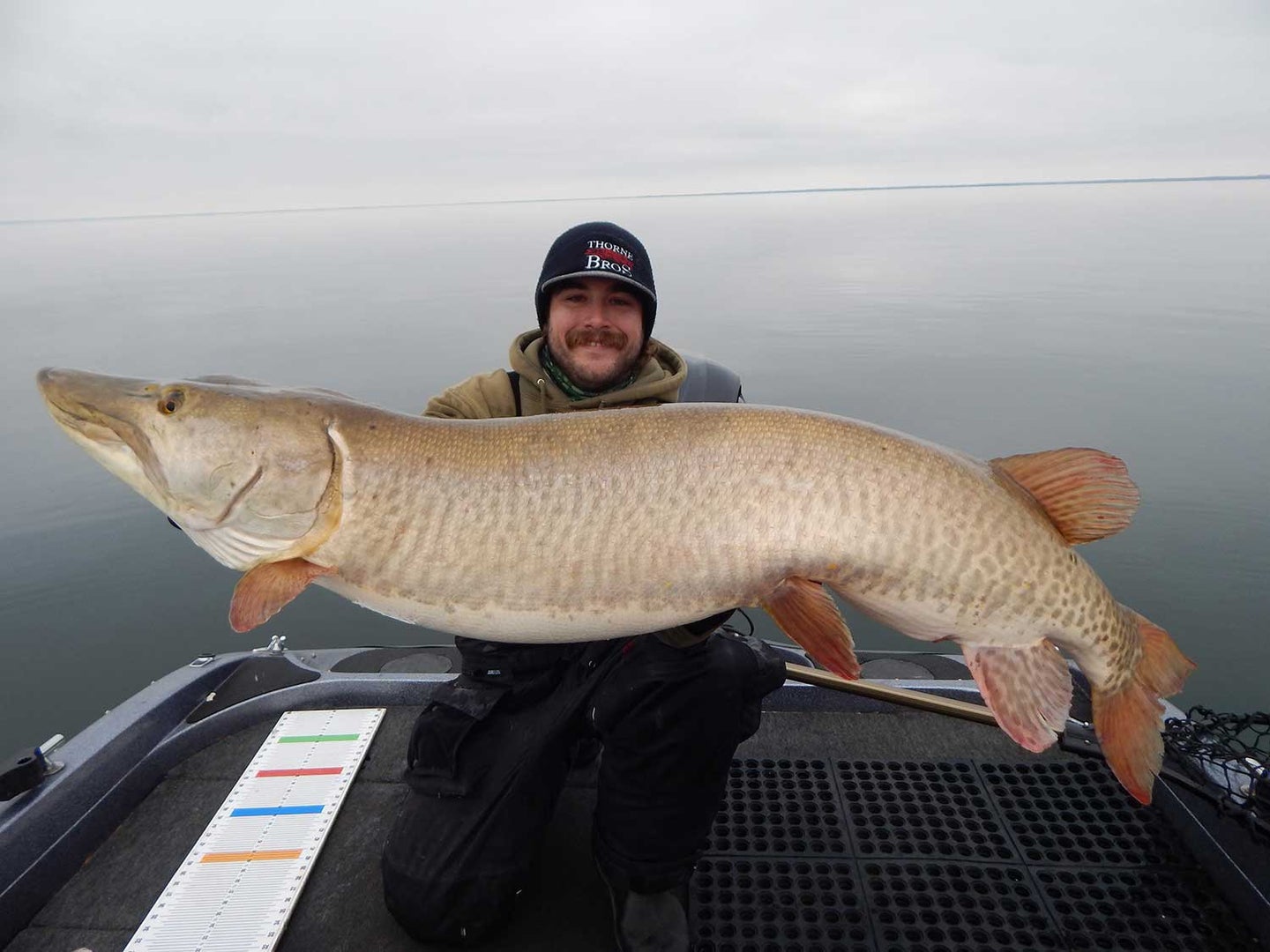 Ben Knutson smiles over his 56 1/2-inch muskie, the first of his two giant fish of the day. Ben Knutson
SHARE

In a sport in which size really does matter, Ben Knutson has raised the bar to an almost unbelievable level.

On November 25, 2020, Knutson, of Inver Grove Heights, Minnesota, caught two 50-pound muskies from giant Mille Lacs Lake, each of which flirted with Minnesota’s state records. And, as nearly all muskie anglers do, he released both fish.

Most fishermen consider a muskie measuring 50 inches in length and weighing about 30 pounds to be fish of a lifetime. The roll call of those who have caught a muskie weighing 40 pounds is much shorter, and only a select few anglers have ever had an encounter with a 50-pounder, much less actually caught one.

Yet Knutson did it twice. In one day.

No wonder Knutson, 28, became an instant celebrity in the muskie fishing world as the news spread. His twin catches were first featured in newspapers across the country, and now Outdoor Life.

“It’s been awesome,” Knutson says. “I’ve been getting a lot of congratulations from all over. I’m already super-excited for next season.”

The restrictions brought upon the world in 2020 by Covid-19 have been devastating to many, but Knutson says the pandemic factored into his success. When life gave him lemons, he made lemonade.

Knutson, who caught his first muskie in 2010, had confided in friends of his dream of becoming a muskie guide. But equipment issues and self-doubt kept him from doing it.

“I had a lot of boat troubles, and I was worried about people asking ‘Who is this guy?’ if I put my name out there,” he explained.

A new outboard solved his boat problems, but then the pandemic hit and Knutson lost his bartending job.

“With the loss of wages I needed something to do, so I took the leap,” says Knutson.

Stocking by the Minnesota Department of Natural Resources has created a terrific muskie fishery in what are called the “metro lakes,” which are literally within view of the Twin Cities. It was there where Knutson did most of his guiding.

As November came and the muskie season waned, Knutson felt the call of Mille Lacs Lake, a two-hour drive north of his home. All muskie fishermen have a little Captain Ahab in them, and some have even referred to the giant, pale-colored muskies that haunt the 132,000-acre lake as “white whales.” In late fall when water temperatures fall to the low 40s, massive schools of ciscoes, an oily baitfish called “tullibees” in Minnesota, move shallow to spawn, and Mille Lacs’ muskies aren’t far behind. This predictable migration produces some of the biggest muskies caught from Minnesota waters each year, and Knutson hoped to be there when it happened.

“That’s the lake where I want to end my season because I could catch potentially the biggest fish in Minnesota and maybe the Midwest,” he explained.

Knutson admits he doesn’t guide on Mille Lacs because the muskie fishing can be difficult. Few clients are willing to fish all day for minimal action. But because of the trophy potential, he annually plans for one final push on Mille Lacs before freeze-up.

“I spent five days there during the first week of November and we caught 51- and 47-inchers and I was like, ‘Dang, maybe I have to come back’,” says Knutson. “So I ended up spending 16 days up there. The restaurants were closed again because of Covid, and that’s probably the reason I was there so much because otherwise I would have been working. We boated 10 muskies during that time and that really kept me motivated.”

Which leads us to November 25.

“I saw the conditions — it was forecast to be a flat-calm, cloudy day, and a friend said ‘Let’s go,’ but then he had to work. I told him that would be the day we’d catch the big one,” says Knutson.

Without a fishing partner, Knutson turned to social media and lined up John Vogler, a real estate agent in Alexandria, Minnesota, whom he’d never before met. Vogler didn’t know it, but he was about to become the net man for one of the greatest days in muskie fishing history.

“The muskies were not coming up for the bait. They were eating it lower in the water column. So, I let my bait sink for a five-count and fished it back to the boat with slow pumps, nothing erratic. I wanted to keep it running about 10 feet down,” says Knutson.

“We started fishing a rock reef where the ciscoes had been spawning. The cisco spawn was insane this year, but on that day the ciscoes were probably still spawning but not like they were. My graph wasn’t filled with ciscoes, so we moved out to about 20 feet.”

Knutson was fishing a super magnum-sized Bull Dawg, a massive soft plastic lure that stretches to 15 inches long and weighs about 13 ounces. In muskie circles, it’s known as the “Pounder,” and the lure Knutson used was in the “lemontail” color pattern. “The muskie hit about mid-sweep and before I even saw the fish I said, ‘That’s her!’,” he said. “The headshakes were like I’d never felt before and the way my rod bent I just knew it was big.

“It must have eaten my bait 15 feet from the boat. The fight was just kind of really slow and there were like four headshakes, and then the fish was parallel to the boat. John had the net ready and the fish did a crazy roll and then nosedived right into the bag. It was perfect.”

Knutson’s muskie measured 56 1/2 inches long with a 27-inch girth. According to a formula used to estimate the weight of released fish (LengthxGirthxGirth/800), the fish weighed about 51 1/2 pounds. After measurement and photos, Knutson eased the muskie back into the lake and it swam away strongly.

The first thing Knutson did afterward was call the friend who was supposed to have fished with him that day, Chris Dzekute, and tell him, “I did it! I finally did it!”

Knutson says he was completely enjoying the moment, calling and texting friends, but Vogler was pretty excited and wanted to keep fishing. So, they motored to another reef known for big fish.

“You know how when you lay waypoints on your GPS for all the fish you catch, and after a while all the waypoints come together and reveal the spot on the spot, that’s where we headed,” he said. “I didn’t think we’d catch another 50-pounder, but we already had one big fish and we had a prime moon phase (moonrise) coming up, so why not?

“We got to the spot about 3 o’clock and we started fishing. I was using the same Pounder when suddenly my line just jumped to the right. The fish must have T-boned it,” says Knutson. “John had just made a bomb cast and he was reeling as fast as he could, and I shouted for him to just drop the rod.

“When it was in the net, I looked at it and said, ‘That’s another 50-pounder!’ I knew it wasn’t as long as the first muskie, but it was so fat.”

Knutson’s second giant of the day measured 53 1/4 inches with a 28 1/2-inch girth. The same formula placed its weight at about 54 pounds. It too released strongly.

Both of Knutson’s muskies were close to Minnesota’s state records. The first was just shy of the released record, a 57 1/4-incher caught in 2019 from Lake Vermilion, and the second possibly matched the kept record, a 54-pounder caught in 1957 from Lake Winnibigoshish.

What’s the first thing you think about after catching two 50-pound muskies in the same day?

“I need a beer!” Knutson joked. “Honestly, I said ‘Let’s keep going. Maybe we can catch a third.’ So we went to another spot and ended the day there but nothing else was happening.”

All of the day’s action was captured with a GoPro camera, and Knutson said he plans to share it one day on YouTube.

Knutson hopes the attention brought by his accomplishment can help him fulfill his dream of becoming a full-time muskie guide. And, like all muskie fishermen, he wants more.

“Maybe I can do it all over again next fall,” he smiled.