3 Bass Fishing Secrets from the Guides of Lake El Salto

Catching largemouth on the world's most famous bass lake 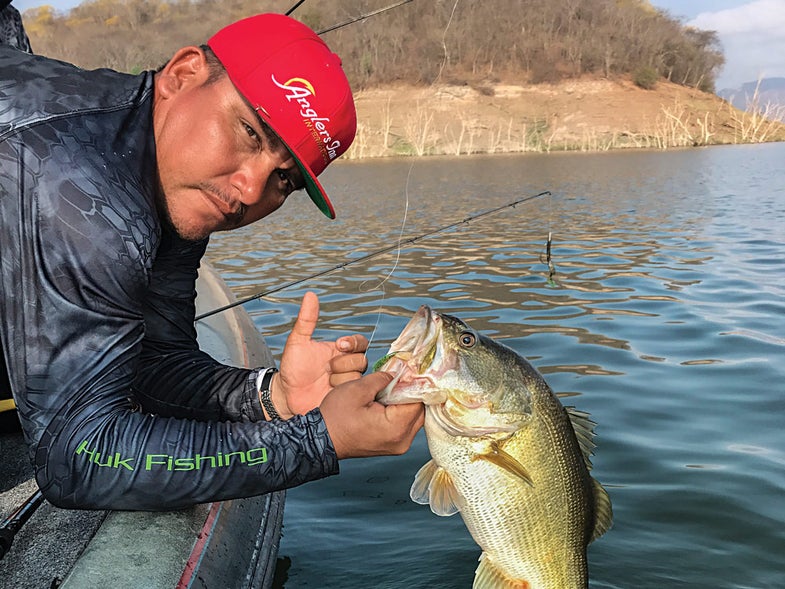 “Ever hear of bailer bass?” I asked Anglers Inn fishing guide Juan Rodriguez. “We’re not catching dinner, but that’s what this is—the craziest largemouth fishing I’ve ever had. They’re bona fide gaffers.” Although I’m certain that much was lost in translation, Rodriguez laughed along with me anyway.

“I love my job,” he shouted. “Cast over there. Big fish—he just jump.”

The 32-year-old Rodriguez has loved his profession as a fishing guide on Mexico’s legendary Lake El Salto for a dozen years. He, along with his brother, Chichi, and uncle, Chago, continue the family tradition begun by Juan and Chichi’s now-retired father, Fermin, who was one of the original Anglers Inn guides on Mexico’s El Salto. Fermin taught them well. We were on our way to a 100-fish day.

The 25,000-acre Lake El Salto (14,000 acres in the dry season) has been a bucket-list trophy-bass-fishing location since 1986. Created by the damming of the Elota River, the reservoir is located 800 miles from the U.S. border, at the foothills of the Sierra Madres—a 90-minute ride from Mazatlán.

“After it was dammed, I got this crazy idea to stock El Salto with Florida-strain largemouths,” says Anglers Inn owner Billy Chapman Jr. “It was sort of the Wild West back in ’85, so we just packed coolers with 200,000 fry from a hatchery in Houston and dumped them in. The Mexican government then stocked tilapia to help provide a commercial-fishing revenue source for villagers, who were displaced by the impoundment. And the rest, as they say, is history. The tilapia are netted and sold once a year, but they provide the main forage for the bass. There’s also threadfin and gizzard shad and crawfish.”

El Salto features about 45 miles of rocky shoreline and vast amounts of drowned timber—mostly mesquite, which remains oddly preserved in areas throughout the lake. With great cover and forage, the bass population has flourished. The lake record bass weighed 18.8 pounds—only California, Florida, Georgia, and Japan have produced bigger fish. The most fish caught in a day is an almost unimaginable 607.

While other destinations may yield bigger fish and possibly a higher catch rate, few are as consistently good.

“Hey, I’m biased,” says Chapman. “But El Salto makes everyone’s bucket list, and that includes KVD. The fishery is topnotch, but we’ve got some pretty good guides here, too, which helps. Most of my guys have been with me a long, long time. They know the lake, but they also know how to catch fish even on slow days. Thankfully, there aren’t too many of those, but it’s fishing—it happens. And if a guy doesn’t catch on fast enough, they’ll help him out.”

Chapman may well have been referring to me—at least in my initial efforts.

“Jeez, dude, I think I’ve got you beat 21 to 1,” my fishing partner, Chris Ellis, of HUK Performance Apparel, told me last summer on our first evening fishing session. “What’s up with that?”

His towering, long cast sailed out like an Aaron Judge home run in Yankee Stadium, complete with the whistling exit velocity. Rodriguez’s big crankbait crashed the surface hard just inches from a rocky point. It barely touched down before he began his frenetic retrieve. Five cranks in, and he was on.

Indeed, it was. We didn’t weigh it, but the bass would have easily topped 7 pounds.

Though I’ve fished crankbaits all my life, I was being soundly drubbed. Whether it was my sheer stubbornness, muscle memory, or the sight of newly exposed crankbait carcasses strewn along the ebbing shoreline, I’m not sure. I was just bad at burning the long-billed, big-bodied Bombers. My slow, uneven retrieve meant fewer hang-ups and lost lures, and less frustration. But it also meant fewer fish. At slow speed, the deep-diver was incapable of reaching the desired depth. Effectiveness depended upon the lure’s getting to the fish and then smashing and bumping into rocks, boulders, and timber once it was there.

“This is a super-fast deal,” said Ellis, who obviously understood guide-speak better than I did. “It’s like burn-your-forearms-off fast to get the bait down—six or seven hard cranks—and then you start to slowly roll it.”

Ellis and Rodriguez had it exactly right. Once I began burning the Bomber, I began catching bass. I couldn’t match Ellis’ success—nor could I top his 8-pound giant—but bumping and bashing worked, made easier with a Quantum high-speed Smoke reel combined with a St. Croix medium-heavy crankbait rod. No hype involved—the rod-and-reel combo made the burning-quick retrieve far simpler.

Whenever the bass bite slowed, we switched to soft-plastics. Whether we were throwing creature baits, swimbaits, worms, or topwaters, Rodriguez continued to school us—offering subtle tips that brought instant results.

Although each member of our squad of 10 had a favorite soft-plastic—creature, worm, or fluke—8-inch, green-­pumpkin Texas-rigged Zoom lizards seemed to outperform everything. Until they didn’t.

“Wow! Why’s it smell like Papa John’s all of a sudden,” Ellis asked. “Now, don’t get me wrong. I ain’t complaining—not in the least—but I’m just wondering.”

Rodriguez’s wry smile told the tale as he dipped the lizard’s tail into a jar of Spike-It, a garlic-scented dip-and-glow bait enhancer. “Me gusta!” he shouted. We liked it as well. The bite turned on as suddenly as it had quit, with the scented-and-dyed lizards outperforming the standard soft-plastics 5 to 1.

“I really wasn’t a big believer in scents before,” Ellis said. “Thing is, you can’t really deny that it’s worked, right?”

Just 100 or so yards from us, outdoor writer Brian Ruzzo had also run into a lull. His fish had inexplicably shut down. “I was fishing a swimbait in 10 to 15 feet of water quite a bit,” said Ruzzo. “My guide was adamant about two things: First, that I let the swimbait sink for several seconds to reach the fish. But the real tip was that he wanted me to feed line to the bait as soon as it hit the water, so that it would sink vertically to the fish rather than swing back to the boat. That shortened my retrieve in the strike zone. And he was right. When we fished wacky-rigged Senkos, he had me double hook them so that they were weedless. It worked, too. Even in a place like El Salto, you need a few tricks.”

When you’re slinging $20 deep-diving crankbaits amid the drowned timber of El Salto, the simple annoyance of a lost bait begins to take on economic consequences. Enter Lachos, one of Anglers Inn’s most experienced guides, who has rigged one of the simplest, yet most brilliant, lure retrievers ever made (below).

“It’s basically a big, old Master Lock,” explained Doug Saunders, who fished with Lachos for two straight days. “He then just twisted, looped, and soldered barbed wire to the lock and tied some rope to the lock. When my crankbait got hung up, he’d slide the lock down the line, pull on the rope, and the lure was free. Ingenious stuff.“

Rodriguez’s creativity, however, takes things to the next level. Forgot your bottle opener at home? The lip on your deep-­diving crankbait—that you just rescued with Lachos’ Master Lock—provides a perfect stand-in (below).