Okay, they tell me confession is good for the soul, so here goes: The recent news of a potential world-record... 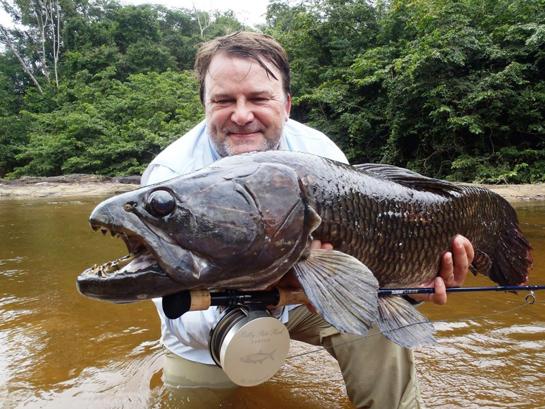 Okay, they tell me confession is good for the soul, so here goes: The recent news of a potential world-record wolf fish caught in Suriname brought back painful memories of the worst, I say the worst ego-stomping I’ve ever endured.

First, the news. According to an Outdoor Hub report, angler Richard Hart caught a 26-pound, 1-ounce trahira (aka wolf fish) on Suriname’s Kalebo River February 23. Hart released the fish after a 90-minute fight, but if certified by the International Game Fish Association (IGFA), the fish would be a new world record for the 8-kilogram (16-pound) tippet class.

The current record for trahira caught on 16-pound tippet is 14-8 and the all-tackle record stands at 32-15.

That’s all very nice, but on to the soul-cleansing. I’ve been schooled in a fishing contest more than once, but never has my pride suffered so greatly as my first night in the Amazon back in July 2006. After stowing my gear in our primitive campsite in Ecuador’s Cuyabeno Reserve, I made the mistake of challenging our canoe driver to a first-fish contest at the edge of Rio Cuyabeno.

I kept it simple – medium action spinning outfit, wire leader (for expected piranhas), single hook and a chunk of meat from the cook’s dinner trimmings. My opponent kept it really simple – just a machete.

I distinctly remember saying to myself, “That rascal just got one.”

Sure enough, the guy comes strutting up with a recently deceased wolf fish in his hand and a “take that” smirk on his face.

How do you recover from that?

I was as impressed with my Ecuadorian friend’s machete skills, as I am with Hart’s fly-rod proficiency. But at least I have a chance of gaining my own mastery of the latter.

Machete fishing? Not so much.

Probably an attainable goal, but the practice could be a career killer. I can’t imagine my contemporaries being very open-minded about me walking lake shores and whacking the water with a long blade.

I guess I could say I was clearing brush?