A Rainbow in Winter: Trout Fishing the Cold Season 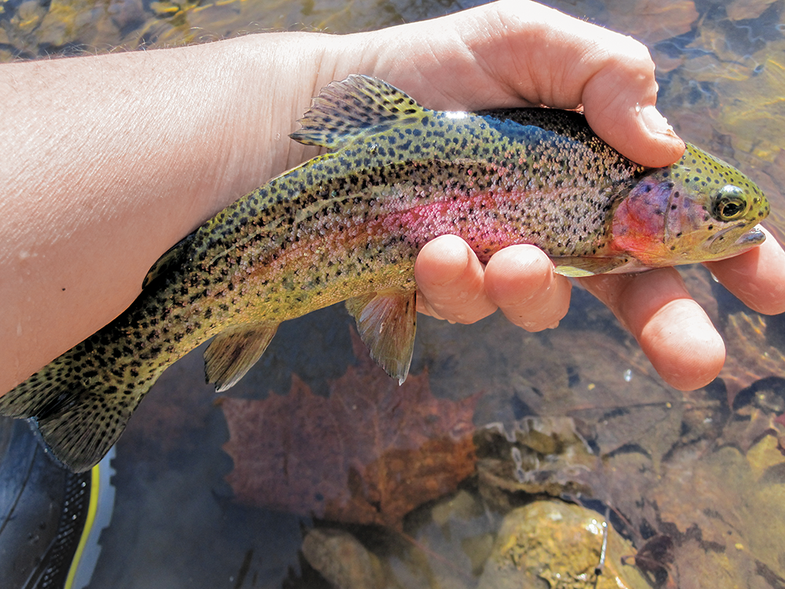 It’s cold for a mid-December Tuesday in Kentucky. The day dawned near freezing but has warmed under a sparkling sun. Shadows from the flanking timber cover the one-lane wooden bridge that spans the Middle Fork of the Red River. I peer into the water, searching for fish, as I’ve done thousands of times from countless bridges. Trout holding in clear water over a gravel stream bed possess an almost translucent quality. These are stocked fish, but they’ve gained a wariness about them. A movement. A flash. It’s all you get. Then a fish turns and shows a glimpse of silver-tinged crimson. They’re here. I retrieve a 3-weight from the truck and scoot down the steep clay bank.

If Kerry Caraghar were here, he would string up with an 8- or 9-foot 5X leader and a 6X tippet, then assemble a two-fly rig, using a No. 20 Brassie or No. 22 Red Zebra midge about 10 inches under a No. 20 Griffith Gnat or a No. 20 or 22 Parachute Adams. He’d add a pinch of lead above the tippet knot and a strike indicator about 5 feet above the top fly, then head to the water with a practical, pragmatic approach in mind.

“There’s no question that trout fishing is more technical in winter than in summer, but there is less fishing pressure to deal with,” says Caraghar, who has worked as the fishing manager of the Orvis Cherry Creek store in Denver, Colo., for 10 years and has been an Orvis-endorsed guide and instructor since 1988. “But I believe winter is the best time of year to learn. Fishing one winter day is as valuable, education-wise, as five days in midseason.”

Caraghar prefers working tailwaters during the cold season because they provide the most consistent water temperature—he considers 40 to 50 degrees the optimal range. He frequently fishes the Platte.

“Winter anglers should use a thermometer and keep a log of the water temperature,” he says. “And keep the fly selection simple.”

A box crammed with 10 dozen different fly patterns isn’t necessary. Caraghar recommends carrying a few Brassies, RS2s, and Red Zebra midge patterns in No. 20 and 22, along with some No. 18 to 22 dries like the Griffith Gnat and Parachute Adams.

Ron Armagost is also a tailwater trout man. He does most of his work on Arkansas’ White River out of Gaston’s White River Resort (gastons.com) and catches some of his biggest fish during the cold season.

Armagost recommends a light to medium-light spinning rig spooled with a 4- or 6-pound-test monofilament. Lure selection is easy: Match the hatch.

“By December and January, you’re usually right at the end of the shad kill,” says the veteran guide. “Go with anything white. A 3-inch white rubber worm is good. A Smithwick Rogue jerkbait works as well. We used to fish salmon eggs a lot. You don’t see them used much anymore. But it’s the old standby.”

Back on the Red River, a pair of trout seem glued to the far bank. I try a roll cast with a No. 22 Zonker Midge and then another one. The third try yields a strike so subtle that only a twitch in the line indicates a hit. But then the fish feels the hook and the fight becomes spirited. It is a rainbow trout nearly a foot long, thick and brightly colored. It is the first of several. I love the winter season.