Skishing: Taking on Deep Water and Big Fish in a Wetsuit 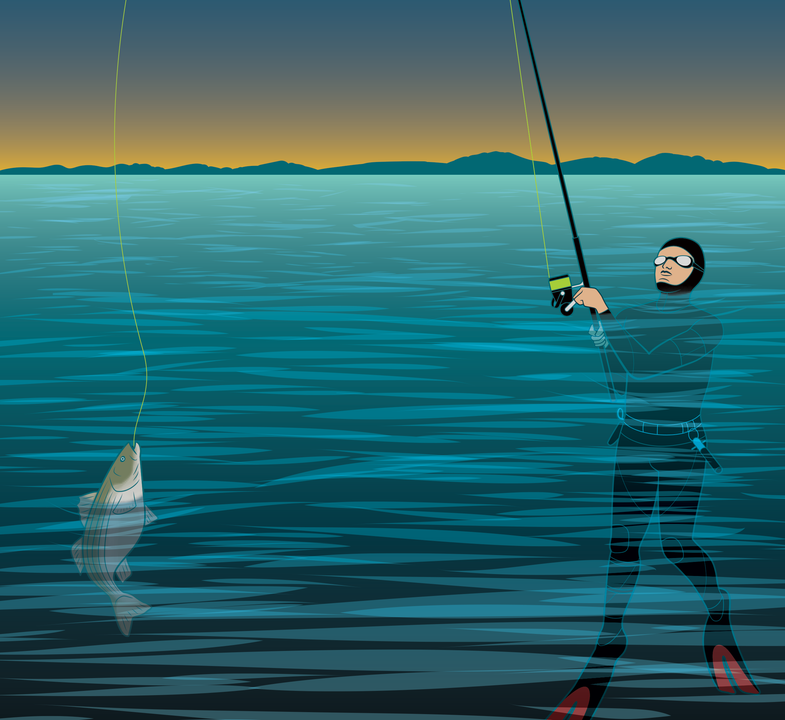 Be the fish. This is the mantra of a few adrenaline seekers whose fishing addiction has taken them offshore and out of a boat, to bob in the ocean with nothing but a wetsuit to keep them afloat while casting for ocean-run striped bass. While most would call it crazy, the participants call it “skishing.” Julio Silva is a skishing junkie. This Chulmsford, Massachusetts, angler got the itch three years ago and scratches it often.

“There is just something about being submerged in the fish’s environment, with nothing separating you from your target but the water you both swim in,” the 41-year-old says. “It’s not easy and there are dangers, like sharks, boats, and rogue currents. But the exhilaration of catching a fish while swimming is unlike anything I’ve ever experienced.”

The dangers Silva speaks of are real. One of his brethren had two fish on his belt as he was swimming to a nearby rock. By the time he arrived, only two heads were left. Luckily, that shark had good aim. Another skisher underestimated the outgoing current and was swept offshore. He had the wherewithal to tie on all the heavy bucktail jigs in his lure pack and cast them out until they snagged on a rock, allowing him to anchor and float until a boat happened by and picked him up.

“I minimize my risk by fishing only incoming tides, practicing catch-and-release, and focusing on gently sloping beaches that are less likely to congregate sharks or boats,” Silva says.

The tactic is simple. Don a wetsuit, flippers, and a lure sack, grab a rod and reel tied to an artificial plug, and swim to where the fish are. “Casting is the toughest part. Remember, you are swimming the whole time. It’s like you are sitting in a chair—there’s not much leverage.” Silva uses an 11-foot surfcasting rod and submersible reel made by ZeeBaaS. He also wears a portable SOS unit on his arm in case something goes awry, as well as a water bottle for emergency hydration. His flotation comes in the form of a 7mm wetsuit, as well as an additional 5mm wetsuit vest. Both hands are gloved, but the right glove has webbing between the fingers to help him turn. His fins are custom-made, with spikes on the heels so he can get traction on wet rocks or reefs.

“I research the tides and current trends in the areas I fish, which are mostly on the North Shore of Massachusetts. You want a current that parallels the beach. When you find this, swim out to the depth you want to fish and drift down the beach while casting. And, I suppose, hope the fish isn’t Moby Dick. If you hook a monster, you may end up in the Azores!”