It’s a little-known fact that in the shadow of Manhattan’s skyscrapers is some of the best duck hunting on the... 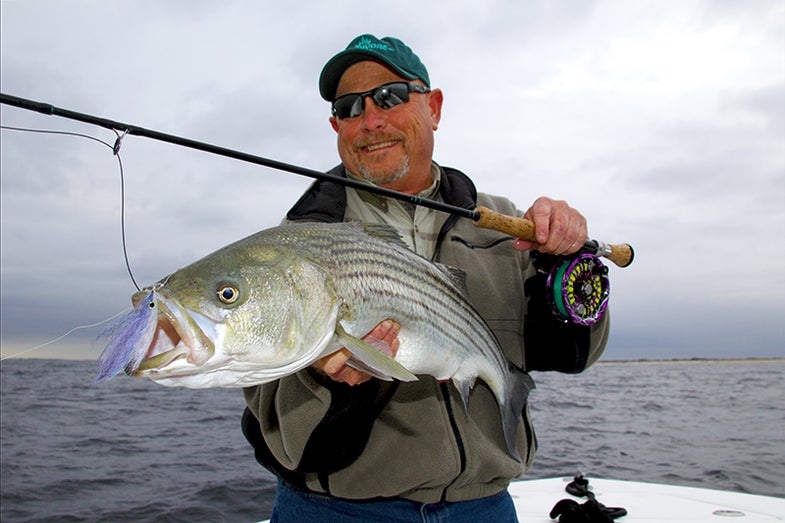 It’s a little-known fact that in the shadow of Manhattan’s skyscrapers is some of the best duck hunting on the East Coast. Each winter thousands of sea ducks—scoters, long-tailed ducks (old squaw), and eiders—migrate to the bays and shoal waters of Long Island, New York. For scoters (black, surf and white-winged) and long-tailed ducks it is both a migration stopover and wintering area; for eiders it’s the southern terminus of their fall migration.

Sea ducks are attracted to this region for its protected waters and abundant food supplies. They feed largely on the mussel and clam beds that are scattered throughout Long Island’s bays, sounds, and offshore waters at depths ranging from 10 to 40 feet.

The waters off Long Island host good concentrations of striped bass from May through November. Bluefish are often mixed in with the stripers, and both species can be eager to take a well-placed streamer, a trolled jig, or cast live bait.

When to Go Long

Island striper fishing is productive in the spring, summer, and fall. Many of the biggest fish are caught in the spring, while fall can produce heart-pounding action when schoolies—fish in the 10 to 15 pound range—go on a feeding frenzy as they push bait fish to the surface. The fall action generally starts in mid September and, depending on the year, remains productive until the first storms arrive, generally some time in November.

The 2014–15 sea duck season is set to run October 17 to January 31. Limits in the Long Island zone are seven sea ducks daily, including no more than four scoters. Scoters begin arriving in early October, while long-tailed ducks and eiders arrive by mid November. Many of these birds stay all winter; however, the largest sea duck populations are present from late October to late November when additional migrants move through the area for points south. While sea ducks can be hunted all season long, the most consistent action is from opening day until early December.

The best time to arrange a cast-and-blast trip is from the opening day of the sea duck season in mid October to mid November. Duck hunting is generally a morning affair with fishing occupying the rest of the day. The keys, though, are to watch the weather, be safe, and be opportunistic. I have hunted ducks in the morning and on the way back to the dock successfully fished for stripers, ending up with limits of both. Striper limits are two fish per day; one must be longer than 28 inches and one longer than 40 inches.

Where to Hunt and Fish
The waters off Montauk, the easternmost point of Long Island, have long been famous for producing both quality and quantity in terms of striped bass fishing. A good percentage of the stripers that migrate north to summer in New England and south to winter in Chesapeake Bay and off the Carolina coast pass by en route Montauk Point. Other areas, including offshore of Moriches, Hampton Bays, and the Great Kills area of Staten Island, deliver good striper fishing as well. Boat ramps are available in at Lake Montauk, Harts Cove, Great Kills Harbor, and several other locations. The run to the fishing grounds varies from 10 minutes to an hour depending on the launch site. Local tackle shops can provide up-to-the minute information on fish concentrations and water conditions.

Where sea ducks are hunted in this ever changing environment is dependent on the time of year, duck concentrations, and ocean conditions. Sometimes it’s off Montauk Point, Hampton Bays, or Great Peconic Bay. If you hunt on your own and you don’t already know the area, scouting is paramount. Think about going at least a day early to check out the area.

The bays and estuaries are open to fishing and hunting and boat launching is easy. More people fish on their own than hunt on their own, but if you have the proper boat and gear you can make it a do-it-yourself cast-and-blast trip. If you’re not familiar with the area, you’re better off hiring a guide (see below). They can be pricey, but they know the area, understand the safety issues, and are almost always successful.

What to Bring
Bring conventional tackle, spinning equipment, fly-fishing gear, or all three. There are opportunities to use each method. You can troll jigs or deep-diving plugs, fish with chunk or live bait, or cast surface plugs or streamers. My favorite method in the fall is tossing a pencil popper with a spinning rod on 25-pound-test line or casting 3/0 streamers with an 8- or 9-weight fly rod to surface-feeding stripers and bluefish. Some of the more popular lures are Hogy swimbaits, NO2 Pencil Lures, Bunka Boy plugs, and various large, deep-diving plugs. Fly fisherman opt for Albie Poppers, Chernobyl Shrimp, and various deceivers.

Most sea duck hunting is from anchored boats in 20 to 40 feet of water. These craft vary from 14-foot boat blinds to 28-foot boats specifically designed for offshore gunning. Sea ducks are not bothered by an anchored boat as long as the occupants remain motionless. They will decoy to within 20 yards of the boat under the right conditions. A few hunters and guides use layout boats. Anchored in the right location they are deadly, as the birds don’t see these low-profile craft until they are literally on top of them. Decoys are an important part of the equation, and a spread of 40 to 60 is what it takes to consistently draw birds in close. Very little sea duck hunting here occurs from shore blinds.

October and November can see changing weather patterns almost daily. It can be cool or downright frigid. Dress in layers and wear waterproof boots and rain gear. Even if it doesn’t rain, the rain gear will ward off the cold salt spray that is part of virtually every boat ride.

Where to Stay and Eat and What to See

An almost endless variety of accommodations and restaurants are available on Long Island. Where to stay will be dependent on the area where you will hunt and fish. I have stayed in Montauk when the action is off the point; Riverhead or Moriches when fishing off the Hamptons; and the Long Beach region when working the western portion of the Island. Most people fly to LaGuardia or JFK airport and rent a car; from either one, the drive to Montauk is about two hours. Other points mentioned above are nearer. Bring the family and visit the Statue of Liberty and Ellis Island, the 9/11 Memorial and Ground Zero, the Empire State Building, or take in a show on Broadway.

What It’ll Cost
To fish in saltwater you will need to register with the Recreational Marine Fishing Registry, but there is no cost. A resident hunting license is $22 and a non-resident license is $100. Licenses can be purchased on line at www.dec.ny.gov/permits/365.html. A $15 federal migratory bird hunting stamp is required. Guided excursions range from $400 per half day to $800 per full day of fishing for two anglers. Hunting trips average $1,000 a day for up to six hunters. Boats, fishing tackle, and decoys are provided.