Given these advantages, let’s explore what a modern-day terrestrial fly box might hold. Some of these ­patterns are hot off the vise, others are more venerable. All will consistently put a sharp bend in your rod. 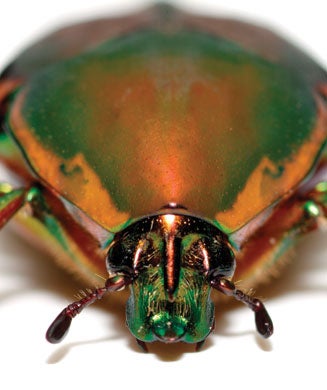 If you’ve prowled any fly shops recently, you’ve noticed a growing number of bins holding terrestrial patterns. It’s like they are reproducing and mutating, morphing into strange and garish Frankenstein-like creatures of foam, Krystal Flash, and twitchy, multi-hued rubber legs. They look more like they hopped out of a horror film than an old-school fly vest.

We are indeed in the midst of a terrestrial revolution. Creative fly tiers have increasingly turned their attention to a realm that used to be somewhat stodgy and overlooked. Going back to flyfishing’s earliest days, the marquee attraction has been matching aquatic insect hatches—mayflies, caddis flies, stoneflies, and midges. While never entirely ignored, terrestrials were often an afterthought—something to tie on if nothing else was happening. The reality is that even on great trout streams, fishable hatches aren’t occurring most of the time—especially during the summer.

Terrestrials, on the other hand, blunder into streams throughout most of the prime angling season. While hoppers are usually associated with late summer and fall, ants and beetles are active whenever temperatures are warm enough to stoke their ­metabolism. What’s more, terrestrials are often effective during challenging hatches, when a more precise imitation may not clinch the deal. A large brown or rainbow, for example, will sometimes inhale a size 18 ant after studiously refusing the more accurate Trico spinner pattern you’ve repeatedly laid down.

Given these advantages, let’s explore what a modern-day terrestrial fly box might hold. Some of these ­patterns are hot off the vise, others are more venerable. All will consistently put a sharp bend in your rod.

Ants help anchor the food chain, feeding everything from hungry trout to lizards, birds, and bears. They inhabit nearly every place on the planet, and are socially complex, numerous, and varied. At current count, there are more than 13,000 species and subspecies that have been scientifically named, with the total likely being at least double that.

Because of their prolific and roaming nature, ants often find themselves floating temptingly over a trout’s snout. They are consistent, season-long producers across the country.

Ant diversity extends to size, so flies range from big busters exceeding a No. 12 hook to midge-size specimens size 20 or smaller. So, in contrast to hoppers, ants offer opportunities for spring creek–like finesse. Go long and fine with leaders over 10 feet, tapered to tippets of 6X or even 7X.

Another often-overlooked feature is that ants can be deadly on still water. Cast one to likely stretches of water and you’ll be surprised how many fish you didn’t know were there suddenly rise up and slurp it down like a piece of candy.

1. Logan’s Ant Misbehavin’
The bug’s catchy name plays off the 1929 song by Fats Waller and the Broadway musical of the same name (Ain’t Misbehavin’). This foam concoction creatively employs bent, wiry legs that look they are dancing in the surface film. ​($2.25; flyshop.com)

2. Egan’s Bionic Ant
I have caught more trout on basic black foam ants than any other terrestrial pattern. This new creation builds on a time-honored chassis by adding a leggy look and a gauzy tuft of wing over the back. It works as either a standard or flying ant facsimile. ($2.25; flyshop.com)

Grasshoppers have led the terrestrial uprising, with an ever-expanding profusion of great flies. One reason for this has been the increasingly innovative use of closed-cell foam and other synthetic materials. Closed-cell foam was originally developed by NASA in the 1960s as a potential way to help absorb g-forces in the Apollo spacecraft. It proved too delicate for that task, but it gradually took off in the 1970s as a flexible and buoyant fly-tying material.

Adult hoppers are typically most prolific from July into September; populations vary greatly from year to year. They are most closely associated with Western streams but work coast to coast. While some species are capable fliers, many still haplessly careen into the water. Warm, windy afternoons enhance the hopper “hatch.”

For large hoppers, fly anglers sometimes employ a 6- or even 7-weight rod and drop down to a leader under 9½ feet in length, with 3X or 4X tippets.

Precise colors and sizes can be important sometimes. At other times they are less so. A straightforward cast and dead-drift float are often effective, but splatting, skipping, or twitching the bug—even allowing it to sink—can also spark explosive strikes.

According to the experts at The Fly Shop in Redding, California, this is the hottest hopper in the Rockies. The pattern presents fish with a low, natural profile and alluring legs that are the hallmark of so many great hopper patterns. ($3.50; flyshop.com)

There’s a curving limestone cliff on southeastern Minnesota’s Trout Run, one of the Upper Midwest’s best spring creeks. As the late-morning sun warms the rock and a breeze rises, terrestrials begin tumbling down to wild browns lurking under shady ledges and overhanging vegetation. The trout remain active and alert, even during the mid-afternoon heat.

Many times I’ve pondered this sweet run while rigging up: ant or beetle? Sometimes one works better, other times the reverse; often, it doesn’t matter. In some cases, individual fish seem to key on one or the other.

Like ants, beetles are common, diverse, and geographically ubiquitous, finding their way into the water from spring until fall’s hard frosts. Similarly, they are effective in a wide range of sizes, from at least No. 10 to No. 20. Also, like ants, they can be effectively employed during hatches when more realistic patterns fail.

As with other terrestrials, beetles can be a disproportionately important food source on small streams, with high bank-to-water-volume ratios. But that’s not to say they aren’t also effective on large rivers like the Missouri, North Platte, or Delaware. Beetles will remain an effective pattern to utilize well into October and November.

1. Hi-Viz Foam Beetle
There are many variations on the classic, easy-to-tie foam beetle, so we would be remiss to not include one. With a bifurcated body, peacock herl belly, leggy profile, and bright thorax indicator patch, this is a pattern no trout or panfish angler should be without. ($1.80; flyshop.com)

2. Cathy’s Super Beetle
This is a new pattern designed by Cathy Beck, who has this to say: “This realistic-looking black foam beetle sports silicone legs and a Hi-Viz wing, making it easy to find on the water. It’s a great search pattern and is literally unsinkable.” ($2; barryandcathybeck.com)

The melodious chirping of crickets is the soundtrack to summer evenings, singing anglers to sleep on many far-flung fishing trips. In spite of crickets’ largely nocturnal ways (dawn, dusk, and night are prime), their imitations still tag fish throughout long summer days.

Compared to hoppers, crickets are the Rodney (“I don’t get no respect!”) Dangerfield of terrestrials, with far fewer patterns available commercially. But these bugs are prolific and readily tumble into streams.

There are many species of varying sizes and appearances, but arguably the most impressive is the monstrous Mormon cricket (actually a shield-backed katydid), which is seasonally widespread in the West. I have observed millions of these ravenous creatures marching across the landscape.

Fortunately, these ugly brutes are a godsend for fly anglers.

1. Slough Creek Cricket
When I last worked Yellowstone’s Slough Creek, it took this Mormon cricket–like bug to turn on the cutts, which can be inexplicably picky at times. It didn’t take long to begin connecting with the 15- to 20-inch butter-bellied fish. This pattern is a winner. ($2.25; blueribbonflies.com)

2. Dave’s Cricket
This classic by Dave Whitlock sports a trimmed spun-deer-hair head modeled on the estimable Muddler Minnow. With all the new terrestrial patterns available today, it’s reassuring to have some traditional bugs in your box. ($2.95; orvis.com)

Cicadas are infamous for their nightmarish, cyclical swarms. The high-pitched trilling the males employ to attract mates (among the loudest sounds made by any insect) does nothing to endear them to most humans. Conversely, a full-blown cicada emergence is a relatively harmless natural spectacle, and one that fish gorge on.

Cicadas live underground as nymphs for up to 17 years, feeding on sap from tree roots. When they finally emerge as adults, aquatic insect hatches are often waning. Cicadas can spark exciting action during otherwise slow, sweltering days. The insects are clumsy aerialists and often have the misfortune of plunking in the water.

While cicadas appear annually, depending on the species and location, their often periodic nature means they aren’t as routinely available to fish as some other terrestrials. But when they are, look out!

1. Fat Albert
If I spotted this crawling on me, I’d jump in the river, but trout love them. The wits at the Madison River Fishing Company describe this exceptionally buoyant bug aptly: “This thing has more legs than a good French burgundy and more foam than a rabid dog’s face. Fat, juicy, and wiggly as all get out.” ($2; mrfc.com)

2. Periodic Cicada
Designed by Ozarks expert Dave Whitlock, this black foam pattern is highly visible due to its glowing red eyes and the indicator patch on its back. Multi-colored rubber legs and tufts of Krystal Flash wing material round out this tasty morsel. ($3.95; flyshop.com)

Some of the most popular and productive flies blur boundaries between generalized attractors and terrestrials, often also masquerading as stoneflies or other aquatic insects. The Stimulator, for example, is an excellent faux golden stonefly, also sporting a hopper, caddis, and moth-like profile; additionally, it’s a terrific buggy-looking search pattern. The venerated Trude series is similar. You can hit a variety of targets with these patterns.

While the terrestrial categories above are primary menu items, it pays to watch for other land-based appetizers, not all insects: spiders (try skating them on the surface), bees, jassids, and spruce moths, and caterpillars and inchworms dangling from overhanging tree branches.

Here are a couple of attractors/terrestrials every angler should have in his box, mainly (but not exclusively) for summer or fall use.

1. Turk Tarantula
Designed by Wyoming fly-tier Guy Turk, this is a versatile pattern that took top honors in the Jackson Hole One Fly Contest. Is it a hopper, a stonefly, a spruce moth, or a lumbering October caddis? The fish don’t care—big trout just smack it. ($2.50; mrfc.com)

2. Bugmeister/Goofball
The Bugmeister (shown here) by Montanan John Perry is really not representative of anything specific, but it is a great attractor for both trout and panfish. ($2.50; orvis.com)

A cool alternative is the aptly named Goofball, by Matt Ramsey. ($2.50; flyshop.com)