In a sign of economic prosperity, companion animals are on the rise in a country known for making meals out... 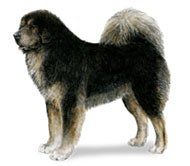 In a sign of economic prosperity, companion animals are on the rise in a country known for making meals out of them. China, whose citizens are famous for their love of status and virility symbols, has gone crazy for one of the largest dogs known: Tibetan mastiffs.

In fact, one named Obama commands $30,000 for a stud fee. In the last few months it’s been reported in Chinese newspapers that the black-and-tan guard dogs have sold for as much as $600,000!

According to an article in USA Today, the upper limits for a Tibetan mastiff puppy in the U.S. tops out around $5,000. My question to you is: how much would you pay for a puppy? what about a started dog? or finished dog? Is there a limit?

There’s an old axiom that says buying a dog is cheapest part of owning one. Yearly vet bills, monthly flea-and-tick treatments and food cost the average dog owner hundreds, if not thousands, of dollars. And that’s for healthy ones. Blow an ACL, get a breed that has genetic dispositions to heart, skin or respiratory problems and you’ll be spending lots of time and many greenbacks at the vet’s office. If you run hunt tests or show a dog, you’ll spend thousands of dollars in travel, hotel rooms, entrance fees and food to put titles on the pooch.

I’ve heard (and read on internet chat boards, a guaranteed source of misinformation) of big-name stud dogs in the U.S. selling for more than $100,000 but have never been able to verify that as fact. It’s not uncommon, however, for good, well-trained hunting dogs to fetch $15,000 to $20,000 (and quite easily, I might add). It’s all about supply and demand, what the market will pay, how much disposable income a person has and what they plan on doing with the dog. For many, owning the best-performing dog in the country is a status symbol; even if they have nothing to do with the training and showing of the dog.

That idea of status and disposable income is what gave rise to companion animals in the first place. As countries economically develop, their citizens prosper and have money to spend on things that aren’t necessary. It’s one thing to feed and care for a dog that protects a flock of sheep or hunts game, both of which provide an ends to a mean, but it’s quite another to provide the service to a canine that does nothing except sit on laps and is used as an ornament. That of course is a definition of disposable income; it’s unnecessary but the person wants it anyway and can afford to do so. It shows the world that they have enough money to care not only for their family, but also enough to do the same for an animal that is of little use.

This has been true throughout the world, but perhaps most notably in England and the U.S. in the last 200 years. Many of today’s dogs that fit within the various kennel clubs’ “companion” and “toy” groups were bred into existence during this time. And it’s true in China today, with the exception that the Tibetan mastiff isn’t an ornamental, yappy lap dog, but a big (reaching 180 pounds!) guard dog with an impressive historical pedigree.

An ancient breed used on Tibetan steppe to guard yak, sheep and Buddhist monasteries, the mastiffs were once used in Genghis Khan’s conquering army. These animals, like many canine breeds around the world, served a purpose to the people that cared for them. They’re aloof guard dogs that have the power and tenacity to protect the family and their goods. It makes sense that the Chinese would pick such a large dog, which requires ample room to exercise and to be housed in (both key indicators of prosperity), and one with a definitively masculine stature, profile and duty.

While Chinese symbols and the animal world interact in very foreign ways to U.S. thinking, by no means should you discount Americans as immune to this syndrome. For proof all you have to do is look at a dog that is the subject of bans and exile the world over, one responsible for numerous attacks and that is used as a status symbol to project masculinity and a propensity for violence: the American Pit Bull.

Love ’em or hate ’em, pit bulls, you have to admit, are used by many to convey a sense of danger and toughness. They excel as catch dogs during hunts for wild hogs (something I wish I had been able to do when I lived in Texas). With the right owners, people that know how to handle dogs, give the animal plenty of exercise and instill obedience, pit bulls can be great pets, even in family situations. But for those that use it as a status symbol and encourage aggressive behavior (something that, depending how it’s carried out, could predispose the animal to reacting in an aggressive manner while simultaneously lowering humans in the dog’s “pack heirarchy” mentality), disaster awaits.

But I digress. Perhaps we’ll talk about breed bans, mandatory spay-neuter laws and other nefarious canine topics at a later date. For now, how much would you pay for a puppy? It could be a started, intermediate or finished hunting dog or even a lap dog. What’s the limit and under what circumstances would you pay more or less for a dog?