How to Pick the Right Concealed-Carry Gun

While a law enforcement officer might have to fire bullets through automobile glass, car chassis, doors, drywall, or other objects... 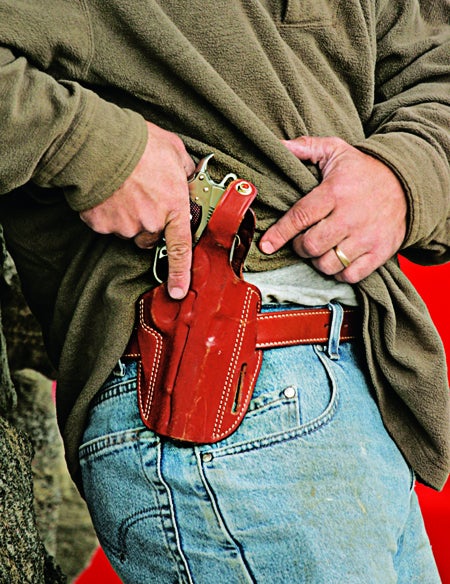 While a law enforcement officer might have to fire bullets through automobile glass, car chassis, doors, drywall, or other objects in pursuit of an assailant, the mandate for a civilian self-defense shooter is to simply stop the attack—and nothing more. A recent study shows that such incidents are most often sudden, close, and brief.

This study, an analysis of almost 500 civilian self-defense incidents in which a firearm was involved, shows that about 50 percent happened in the home, 30 percent in a place of business, and the remaining attacks occurred in a public place, frequently a parking lot. The majority of the time, the range of these encounters was less than 12 feet. Shots were fired in fewer than 80 percent of the attacks, and when the person being assaulted did have to shoot, he rarely shot more than three times. The most common response of the attackers was to flee, unless the shooting incapacitated them. The most common calibers used were 9mm and .38 Special (62 percent). Calibers .380 and smaller were used 24 percent of the time, .40-­caliber and larger only 14 percent of the time.

These events illustrate three key features that a purchaser of a self-defense handgun needs to seriously consider: reliability, ease of operation, and portability.

Reliability is critical in a personal-­protection handgun. If it malfunctions when needed, it’s worthless. Double-action revolvers have an edge, but with proper maintenance a semi-auto can be very reliable. If the user isn’t willing to do the required maintenance on a semi-auto, or is incapable of doing it, then a revolver is a better choice.

Ease of operation is also key. Given the close and sudden nature of most attacks, the gun needs to be one that can be brought quickly into action and fired with either hand without a lot of mechanical manipulation. Revolvers once had a distinct edge here, but striker-fired and double-action semi-autos are equally effective.

Another consideration is whether you can hit what you’re aiming at. A bigger caliber isn’t always better if the recoil intimidates the shooter to the point where he cannot strike his target. Two good hits with a .22 LR beat two misses with a .44 Magnum.

Portability isn’t a factor in a gun kept for home defense or in a vehicle, but it is an important factor for concealed carry. If the gun is too heavy and bulky, or has sharp edges that dig into the body, it tends to get left at home or in the vehicle and might not be with you when you need it. A good carry handgun should feel like a well-used bar of soap—smooth and comfortable, with no sharp edges.

Pocket Pistols
▶ There was a period in American history when it was common for a gentleman to have a small pistol stashed away in a pocket, hence the reason these pint-size handguns were called pocket pistols. With the increasing number of concealed-carry permits being issued by many states, pocket carry is once again becoming popular.

There are a number of very compact handguns in .380 ACP semi-auto and .38/.357 Magnum revolvers that are designed for that role. They weigh less than 20 ounces fully loaded. The semi-autos normally carry seven rounds, with the revolvers holding five. The better semi-autos are smooth, rounded, and without exposed hammers, while the revolvers also feature enclosed or bobbed hammers. This is an important feature because a spur hammer can snag as the gun is being drawn from a pocket holster.

Double-action revolvers are often the choice of experts because of their reliability, and the power advantage .38 Spl +P loads have over even the best .380 ACP loads. The most popular revolvers in this category are the Smith & Wesson 442, 642, 638, Bodyguard 38, and M&P 340; the Taurus 651 series; and the Ruger LCR.

A new generation of ­polymer-​framed .380 semi-autos also fits the bill for pocket carry. Less than 1 inch thick, carrying seven rounds, smooth and snag-free, and weighing less than 14 ounces fully loaded, these guns are extremely comfortable to carry, and as easy to use as a revolver.

The most popular models in this group are the Ruger LCP, S&W Bodyguard 380, and the Taurus 738.

Mid-size Holster Guns
▶ Pocket pistols can work well when things are close and sudden, but their effective range and power are limited by the small gun size and cartridge. There are many larger, more powerful handguns that are concealable and fit well into a belt holster, purse, or fanny pack. You can divide them into two groups: tweeners and compact holster guns.

Compact holster guns are larger and have a higher capacity than tweeners. They are basically downsized versions of full-size duty guns, but with shorter barrels (3.5 to 4 inches) and reduced grip sizes for concealment. They weigh between 22 and 27 ounces empty, and are available in 9mm, .40 S&W, .45 ACP, and even 10mm. Depending upon caliber and model, they hold from 11 to 17 rounds.

Compact holster guns offer enough weight and heft to shoot accurately, and are easily concealed in a proper holster, or in a purse or fanny pack. An added advantage is that the Rugers, the S&Ws, and most of the Glocks can use the same high-­capacity magazines as their full-size parent guns, making them a fine choice for home defense as well as concealed carry.

Those that prefer double-action revolvers for a compact carry gun will want to look at the Ruger GP-100 stainless-steel 3-inch or Ruger’s SP101 series, the Taurus 650 series, or the S&W 686 or 327 series. Chambered for .357 Magnum, the various models provide anywhere from a five- to eight-round capacity.

All of the above handguns are proven models that will serve their user well. Which is the best for you? Only you can decide that. Much depends on how well the gun not only fits your hand, but also your style of dress and needs. The simplest way to determine that is to try before you buy.

Most gun shops with shooting ranges have rental guns available. You can heft and shoot a model before you buy it. Considering the expense of purchasing a handgun, ammunition, and associated accessories, the time and modest dollars spent renting beforehand is money well spent.