From the outside, the new 12-shot 1873 Cattleman from Uberti looks like a normal revolver made of steel and wood.... 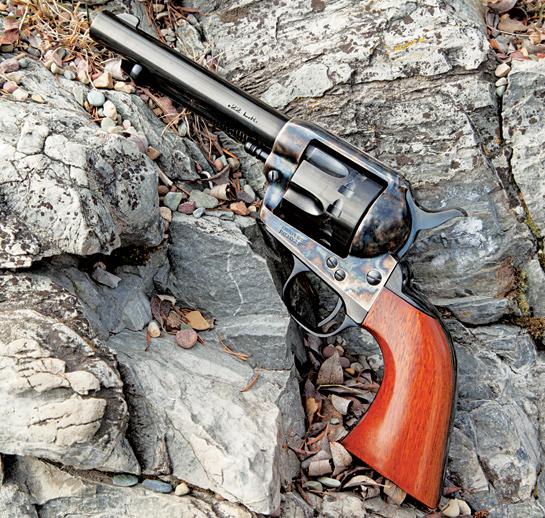 From the outside, the new 12-shot 1873 Cattleman from Uberti looks like a normal revolver made of steel and wood. But based on the reaction it has elicited from the broad cross section of shooters I’ve shown it to–everyone from grizzled cowboy-action veterans, to chiseled Green Berets, to my horse-obsessed teenage daughter–I’m now convinced that some other alchemy is at work. I don’t know whether Uberti’s craftsmen in Italy added pixie dust, unicorn horn, or some other magic ingredient to the mix, but the result is potent. This little shooting iron has more appeal than a basket full of free puppies.

Classic Looks
From a purely aesthetic standpoint, the handgun is a winner. The silhouette of the Colt 1873 is among the most beautiful firearms ever created, and this Uberti is a faithful full-size reproduction. The walnut grip is plain and smooth and fills the shooter’s hand with the perfect arc that made the original Single Action Army (SAA) renowned for its pointing and gun-fighting abilities. The frame is case-color-hardened and displays a fetching variety of textures that add to the revolver’s nostalgic looks.

The rest of the metal on the Uberti is deeply blued with a smooth, even finish, including the barrel, trigger and trigger guard, and backstrap. Uberti is offering the Cattleman in the three barrel lengths that the original Colt SAA was offered in: 4 ¾ inches, 5 ½ inches, and 7 ½ inches. Mine was a 5½-inch version, known as the Artillery model in the Colt lineup, and is my favorite barrel length among the SAAs for its balance and looks.
**
Smooth Mechanics**
Mechanically, the Cattleman works like any other SAA. The gun is loaded by partially cocking the hammer, which allows the cylinder to spin freely, and opening the loading gate, exposing the chambers. To remove the empties, do the same thing, and use the spring-loaded ejector under the barrel to push the brass free.

Of course, the real fun with the Cattleman occurs during the time between loading and unloading. It is an addictive shooter. No spinning target, tin can, dueling tree, or bull’s-eye within 25 yards downrange is safe. I found the accuracy of the pistol to be quite good. Even out to 50 yards, shooting off sandbags, I was able to keep the rounds within a 6-inch circle, though the sights on my revolver were placing the rounds slightly high and to the left. At closer ranges, even the smallest targets were easy game as long as I kept the tip of the front sight in sharp focus and aligned within the shallow groove that runs along the top of the frame. I put a number of .22 loads through the revolver, and it shot all of them equally well. The exposed firing pin on the hammer left deep and solid strike marks on all the brass. The chances of a misfire with this pistol are minimal.

The Cattleman cocked and ran smoothly, with the distinctive series of clicks common to the SAA. My sample had a wonderful 2 ½-pound trigger that, along with all the other handling qualities that are inherent to the 1873’s design, made it one of the most enjoyable handguns I’ve shot in a long while. The light recoil and naturally ergonomic design are well suited to new shooters and kids as well.
**
Hunting Iron**
In addition to being ideal for plinking, the Cattleman would work well for small game and varmints at close ranges, and it has a pedigree that makes it look sharp in a tooled leather belt and holster while out on the trail.

At $559, the Cattleman offers a good deal of gun for the money–though based on the reaction my sample got, your biggest challenge might be to keep it out of your friends’ hands long enough to shoot it yourself.

REPORT CARD
Overall: * * * 1/2
Performance: B
Design: A
Price/Value: B
Verdict: One of the most shootable firearms on the market. Great for all ages and skill levels.