Although Hemingway’s exploits in Africa have inspired many, his iguana hunt on the Cuban coastline with friends John Huston and... 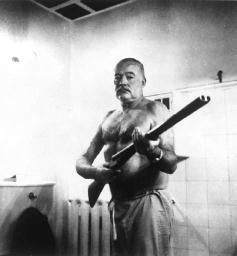 Although Hemingway’s exploits in Africa have inspired many, his iguana hunt on the Cuban coastline with friends John Huston and Peter Viertel is mostly unknown.

Trying to put a morning of poor fishing behind him, Hemingway pulled his boat into his favorite cove for lunch.

Afterwards, Papa entertained his guests by shooting drifting beer bottles with a .22 rifle at distances as far as 100 yards. When a huge iguana sunning on a far beach was spotted, Papa wasted no time in taking a shot. With his third shot successful, Papa had Huston and Viertel swim ashore to retrieve the lizard. Growing exhausted and tipsy from drinking the two were about to turn back toward the boat when they saw Papa swimming, rifle held above his head, behind them.

On the beach, Papa declared his trophy the biggest iguana he had ever seen and planned to have it made into a handbag for his wife.