Must You Force Fetch?

In the dog world there are few hard-and-fast rules when it comes to training. Whatever it takes to get the... 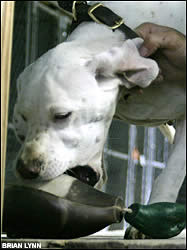 In the dog world there are few hard-and-fast rules when it comes to training. Whatever it takes to get the dog to do what you want, no matter how unconventional and as long as it’s not unfairly applied to the dog, is usually okay. What it usually boils down to is individual standards and acceptability. What works for one guy won’t necessarily make the grade with another.

That’s where religion comes in. One group of believers say you “have” to follow their doctrine to have a finished dog, while another groups says you don’t “have” to or that their way is better. While just about anything about dogs can be argued over, including breed differences, breeding stock, complete training regiments, show vs. field standards, etc; the two most pervasive arguments pertain to the use of e-collars and force fetch. Today we’re going to tackle force fetch.

At the root of the argument is this question: Can you have a finished, reliable dog without the use of force fetch?

Force fetch, in case you’re unfamiliar with the term, is, in a very basic, nuts-and-bolts explanation, the repetitive application of a negative stimulus that conditions a dog to get an object in its mouth as quickly as possible upon cue. It’s the backbone of many training methodologies, the finishing touches in others and still heresy in other circles.

In short, you pinch the dog’s ear or wrap a cord around two of the dog’s toes and squeeze them together. When the dog opens his mouth to protest, whether that’s to vocalize or bite, you shove a wooden training dowel into his mouth and simultaneously release the ear or toe pinches. Done repetitively, the dog quickly learns that the painful stimulus goes away as soon as he gets the object in his mouth. He quickly begins diving for it and by overlaying a command, such as “fetch”, the behavior and consequence are associated with a cue word. You can then overlay the e-collar and use an electrical stimulation instead of a pinch to gain the same results.

In many retriever programs force fetch is the backbone of the program. It is then parlayed into a multitude of concepts that involve “turning pressure off.” While it’s done fairly early (around 6 months or so) in retriever training, in bird dog training it is usually the finishing touch on a dog and is done after all the other yard and field work is complete.

The Argument For Force Fetch

Proponents of “the trained retrieve” or “conditioned retrieve” (politically correct terminology for force fetch) espouse the fact that you have a complete dog that is working for you and not just because he wants to…these are not mutually exclusive, however; the dog can still enjoy/want to do the work, but he also has to do it.

The argument is made that sooner or later an unforced dog will quit on you and then you’re screwed. What are you going to do? With an unforced dog, you have no recourse other than to try and coerce him via play or some other method to induce him to make a retrieve. On the other hand, it’s contended that a forced dog can be made to retrieve because you have conditioned the response to pressure and getting something in his mouth; you have a tool to call upon if your dog refuses to go.

Force fetch also has many by-product effects other than just getting an object in a mouth. It can clean up mouth issues (rolling, chomping, a sloppy hold, hard mouth, etc), it helps establish the handler/trainer as the Alpha in the pack hierarchy, it helps bring hard-headed/dominant dogs in line while also bolding up timid dogs. “Force programs” often use the same of idea of “turning pressure off” during the force fetch process (ear pinch, open mouth, object in mouth, pinch turned off) to teach more advanced concepts like taking lines; holding lines through water, suction, diversions, etc; driving hard on the initial lines and many other things.

The Argument Against Force Fetch

Detractors of force fetch say that you can indeed have a complete and reliable dog with hold training, high obedience standards and a complete and consistent training program that teaches desired results and appropriately rewards or reprimands a dog accordingly.

Their argument is that if a dog refuses to go for a retrieve or take a line on a blind, it is either (A) genetically unsuited to the behavior, (B) confused by the task being asked of it or (C) its training has holes in it or (D) some combination of A, B, C (or any number of other issues). If a dog is genetically capable of performing the work and has been well trained, then it will carry out the required task being asked/commanded. If it is confused by a training setup, then the detractors solution is to not add force, but to simplify the setup and break it down to base parts (this isn’t to say that force fetch advocates don’t practice the same philosophy).

Additionally, force fetch detractors often say that the process is detrimental to breeding stock. They argue that hereditary issues such as hard mouth (of which there are many causes) are covered up by force fetch and that these traits are knowingly, and/or even unknowingly, passed along, and perhaps even made worse, because force fetch can, and will, correct them via the training process. It’s more of a purist point of view that you breed for what you want, not something you over-ride Mother Nature with in training.

It’s often said that force fetch, and by proxy field trials (at least in the retriever world), is responsible for changing the disposition of the Labrador retriever. The contention is that force fetch, via training methodologies and breeding based upon trial success, has created a Lab that’s too high powered, too hard headed and too much dog for the average gun dog owner. The idea is that now the tail is wagging the dog, so to speak, and that continual breeding of dogs that could withstand the pressure of force fetch and the demands of high-stakes field trials has created a modern-day Labrador that now has to be force fetched; a bit of a self-fulfilling prophecy.

I have my views on the subject and, as I mentioned, it largely comes down to individual standards and acceptability. I’ll chime in with my two cents if the discussion takes off, but until then:

What say you, Gun Doggers? Is a force fetched dog a superior animal, hunting companion and better-trained dog than an unforced dog? Can an unforced dog be a competent and unabashedly reliable dog in the field and hunt-test circuit?