How Sweet It Is?

Expect a crowd tomorrow morning in front of the U.S. District Courthouse in Missoula, Montana, and watch artificial sweeteners flying... 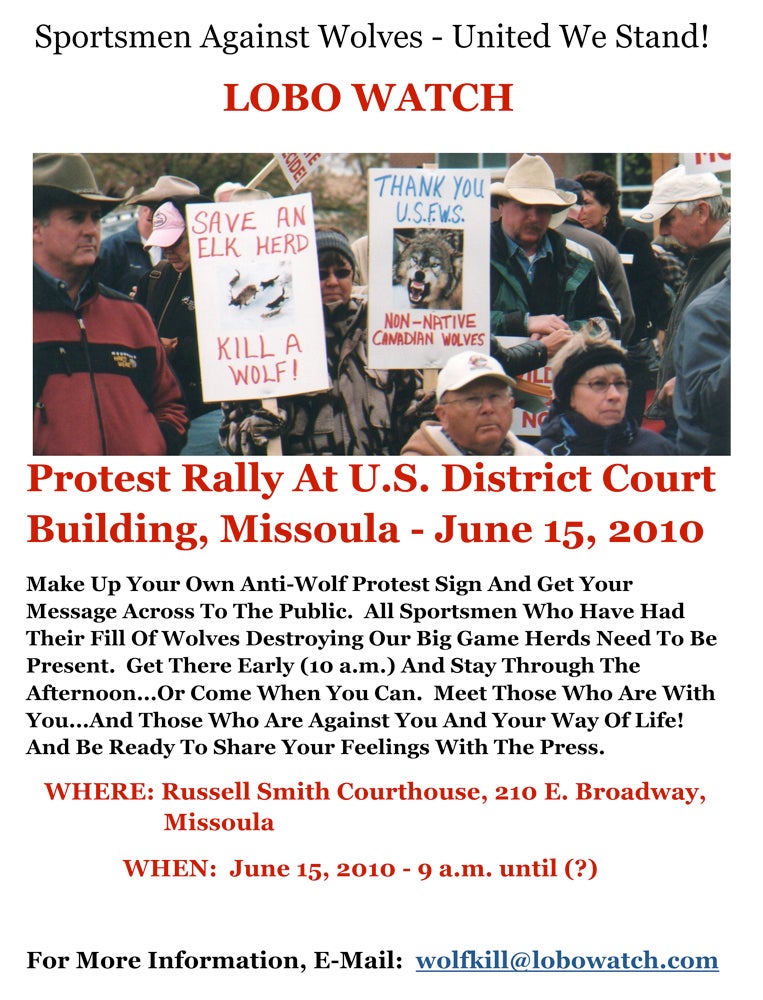 Expect a crowd tomorrow morning in front of the U.S. District Courthouse in Missoula, Montana, and watch artificial sweeteners flying off store shelves across the rural West.

The crowd’s destination is predictable. Tomorrow, from 9-11 a.m., Judge Donald Molloy is hearing oral arguments in a case that could send gray wolves in the Rocky Mountains back to the Endangered Species List.

You can bet the real theatrics won’t be in Molloy’s courtroom, but instead will be on the sidewalk of East Broadway Street, in front of the federal building. That’s because both sides are gearing up for protests.

I got this poster over the weekend from Jim Hagedorn, spokesman for Idaho for Wildlife and a guy whose business it seems is rallying the wolf haters.

But the freshest indication that wolves are tipping people over the edge of reason comes from Missoula hunter Toby Bridges, whose blog Lobo Watch has become the most virulent of the anti-predator forums.

Last week Bridges further whipped up the frenzy against wolves with his suggestion that hunters may want to take matters into their own hands, especially if Molloy recommends that wolves be protected from hunting. Bridges is suggesting that the best wolf-control substance can be obtained at health-food stores. It is the artificial sweetener Xylitol, which can be fatal to canines. [ Click here for the article ]

Bridges prefaces his post with this “disclaimer”: “LoboWatch is not recommending the use of this product. What you do with it is entirely up to you.”

But his suggestion that “it’s time to start fighting dirty” and his detailed directions on dispensing this “secret weapon” would lead most of his readers to the conclusion that it may be “killin’ time” for wolves, no matter their legal status.