A Louisiana hunter with copious amounts of time on his hands has invented a chastity belt for canines. When Dexter... 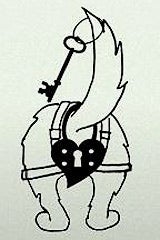 A Louisiana hunter with copious amounts of time on his hands has invented a chastity belt for canines. When Dexter Blanch was shot in the arm by his beagle, he faced a long road to recovery and spent it coming up with a contraption that allows female dogs to carry out bodily functions but that prevents her from copulating.

The strap-on contraption features a polypropylene belt with an eight-buckle locking system and washable mesh pad and is called the Pet Anti Breeding System (or PABS). The washable mesh pad must be cleaned during the bitch’s cycle, but does keep amorous dogs from defiling her (while also allowing defecation and urination to take place).

Blanch came up with the idea to help prevent and reverse the problem of pet overpopulation. “I think it’s just a shame that millions of dogs have to be destroyed every year, because of overpopulation,” he said.

For more on the story and video from Westminster, check out this article from AOL.