Back in December I wrote “start hanging out with Russian Prime Minister Vladimir Putin” on my list of New Year’s... 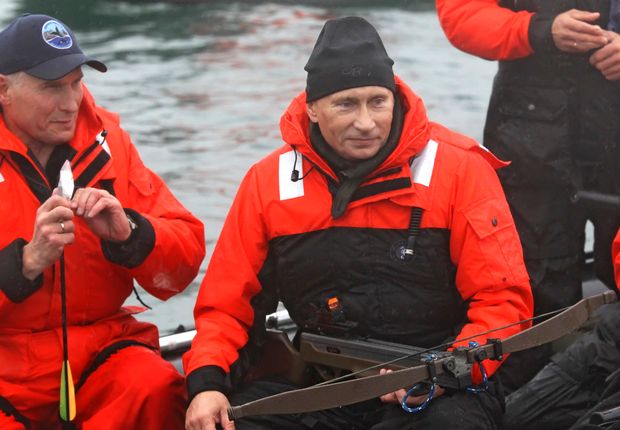 Back in December I wrote “start hanging out with Russian Prime Minister Vladimir Putin” on my list of New Year’s Resolutions. I did so because he has a fondness for beer, enjoys watching fights and gets to hunt endangered species with a tranquilizer gun.

I’m sure him engaging in the latter has to do with his political clout and not with the fact that he’s so cool he responds to wimpy reporters who ask about his outdoor endeavors by saying, “Living in general is dangerous.”

You tell ’em Putin. If he gives you anymore lip ship him to a gulag!

I first noticed Putin’s fondness for the outdoors when the news covered him fishing on a camping trip. In the released photos, Putin’s soaking up the sun with his shirt off while reeling some carp-looking monster out of a sub-frozen river. Other outdoor forays covered by the news include Putin placing a satellite-tracking collar on a sedated polar bear, releasing leopards into the wild and shooting a Siberian tiger with a dart gun.

Not impressed? Consider then that Siberian tigers push almost 700 pounds in weight, can easily kill a Russian leader with one swipe of a paw, and that the effective range of a dart gun is not much more than the distance from you to the computer screen. I’d say Putin’s one steadfast tough man of steel.

But Putin’s latest endeavor tops them all. According to the Associated Press, Putin shot a gray whale with a crossbow off Russia’s Far Eastern coast on Wednesday, August 25. I mean, come on, how cool is that? Shooting a gray whale with a crossbow?! Granted the crossbow bolt was designed and utilized to collect a skin sample but – damn! Who gets to do things like that?

Reporters stated that Putin was elated at his successful shot and even bragged “I hit it at the fourth try!” Not bad considering he fired from an extremely small open boat in the middle of a swelling arctic ocean. Heck, I’d be lucky if I could stand upright in conditions like that let alone shoot a moving animal.

I haven’t made good on my Putin New Year’s resolution yet but this latest hunt has really got me trying hard to find his phone number. Anybody have it programmed in their cell? Maybe you could email it to me.