The Man-Eating Lions of Mozambique 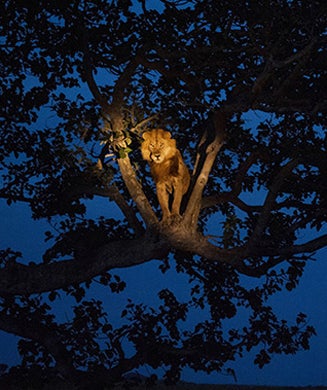 Change comes slowly to northern Mozambique. Wally Johnson, hunting legend of the last century, worked the area and shot some very big tuskers there. He noted of the native Makonde people that “their women all had a two-inch nail sticking through their upper lips.” Originally an ornamentation, it also had the happy result of making them unappealing to the Arab slavers that trolled through Makonde villages seeking to stock the sultan’s harems.

During the independence conflict a generation ago, the area became a war zone as Portuguese colonial troops battled insurgents coming south out of Tanzania. The guns went quiet in 1974, and African nationalists took power, but rural villagers here live a primitive life largely unaffected by political trends.

Villagers are mostly Muslim, some are animist, but witchcraft is rampant and there are dark whispers of cannibalism, widely practiced in days of yore, creeping back into the local culture. And, just as they have done for centuries, the roars of man-eaters that roam this wild land continue to send waves of pure terror through a vulnerable populace.

Straddling the Lugenda River, with the Rovuma River to the north, this is a vast, unruly wilderness where granite inselbergs (rocky obelisks) burst above the bush like gigantic tombstones and dominate a forbidding landscape lined with labyrinthine river systems. As they near the sea, the rivers widen into a lush littoral, and along these pristine watercourses, elephants sometimes journey all the way to the surf.

The few outsiders who visit here legally come to hunt the coutadas, or safari concessions, and these licensed hunters and their scouts are on the front line of the area’s latest war, against organized, effective, and violent ivory-poaching gangs.

“The Somalis have been the biggest problem,” says PH Steve Liversidge. “They have taken a steady toll.

“Much as I loathe these poachers, I must admit they’re tough and aggressive, and some are bloody good elephant hunters. I found seven big bulls in a pile put down virtually atop one another by a single shooter. It was a stunning display of fine musketry. I went after him, but he gapped it out of the area at speed.”

Return of the Lions
Into this vacuum of lawlessness, lions have moved in from southern Tanzania and the interior of Mozambique. Increasingly these cats are adding humans to their menu. One explanation for the increase in man-eaters is that bushpigs have become a dietary mainstay for lions living near settlements. The pigs invariably feed at night in cornfields, which are often guarded by crop-protecting villagers. When the lions come hunting, they come into close proximity to people, and the cats develop a sense of familiarity that breeds lethal contempt. Sleeping sentries become collateral targets, and once the lions appreciate the ease of the kill, they add human flesh to their diet.

“There’s something unusual about the relationship between man and beast in this place,” says Derek Littleton, a resident professional hunter. “The folks here are generally docile, shy, self-effacing. Lions are generally wary of man, but here that’s not always the case. They almost lord themselves over the people in some places. Lions do not take the same liberties with the Maasai, for instance. They’ll attack them, too, but they’re a damn sight less brazen about it.”

Exacerbating the threat, there is a dearth of horned game in some areas, and in those places humans constitute the most convenient form of nutrition. The conventional wisdom is that man-eaters are generally old, infirm, or wounded. That does not apply here. There is a report of one lion on the Rovuma who is thought to be accountable for the deaths of more than 40 people. When they caught up with him, it was discovered he was only four years old.

Littleton has been following hard on the tracks of one of the most prolific predators in the area for more than a year now.

“He’s a cunning fellow. Operates alone, moves into an area, and he’s not shy about announcing his arrival by roaring into the night,” says Littleton. “The villagers light fires, some sleep in tree platforms or barricade their homes, but he bides his time until things settle down. On one occasion, he broke through a door and attacked a child but couldn’t bite through the heavy straw mat that shielded the kid.”

Failing to breach the door on another hut, the cat leapt onto the thatch and went in through the roof to snatch a young girl inside.

“He kills, then moves a big distance, and it’s hard work following him,” says Littleton. “A lot of the ground is rocky and hard, making tracking tough, but I’m going to get him.”

Anticipating an attack one night, Littleton waited outside a village but heard nothing.

“When I gathered my kit in the morning, I found a human shoulder bone a short distance away. He had eaten while I waited. He’s a confident killer.”

Such is the confidence of the lions that they have even moved close to the coastal town of Mocimboa da Praia. One victim, a disgruntled gambler, emerged from the local casino to take stock of his losses under a mango tree. Unbeknownst to him, a lioness lurked in the branches above, and just when he thought his evening could get no worse, she alighted upon him. At the end of the encounter, he had to reconcile himself to having lost not only his money but also part of his bottom. Luckily, a crowd collected and scared the cat away, and the punter lived to lick his wounds.

The Sacred Cat
Adding to the woes of those who seek to deal with the killers is the curious attitude of the locals, many of whom believe the lions are merely acting on behalf of aggrieved ancestral spirits seeking to purge the community of those possessed by evil.

On one occasion, a hunter on fresh tracks, close to making contact with a small group of males that had been raiding villages, was ordered to halt by an official in the civil administration. It was discovered later that tribal leaders and cuchucuheiros (witch doctors) had intervened and lobbied the authorities strongly on the lions’ behalf. The issue became political and the local administration bowed to the tribes’ demands. The lions were left to kill again.

But man’s problems in the area do not end with lions, says hunter James Egremont-Lee.

“Most interesting for me are the man-eating hyenas that terrorize some of the coastal villages south of Mocimboa da Praia,” he says. “The vegetation is denser, and there are plenty of lions, but in this area the hyena are the dominant threat. They move in packs and are so brazen that they actually haul victims out of their huts. A nightmare situation, hearing the hysterical, almost diabolical cackling of hyenas gathering to attack you in your home.

“We had six people killed by hyenas in coastal villages near us, and 14 taken by crocodiles. It’s not a neighborhood for the faint-hearted.”

Lions wreak their share of havoc on the eastern coast, too.

“My first experience with [coastal] lions was at a village on the Lugenda,” recounts Egremont-Lee. A young girl was sleeping with her family on the veranda of their hut, where they might be cooled by the breeze. “She was plucked from her bed and carried away, but the noise awoke a relative who gave chase and the child was mercifully discarded. Luckily, none of the punctures were into the bone, the infection was treatable, and she recovered.”

A less fortunate girl, snatched in full view of a crowd squatting around an evening fire, was spirited into the surrounding bush. When the villagers gave chase, the lion dropped the girl, turned on them, put them to flight, and then slunk into the night to consume his quarry.

And so, the ancient contest between man and beast continues in this east-African wilderness, by turns enduring and resisting the vagaries of modernity. George Adamson, the author of Born Free, warned that nature would strike back at civilization that intruded too deeply into wild places. Perhaps the lions of northern Mozambique are in that vanguard.