I still carry in my pack the first GPS unit I ever bought, a Garmin eTrex Vista. The reason it... 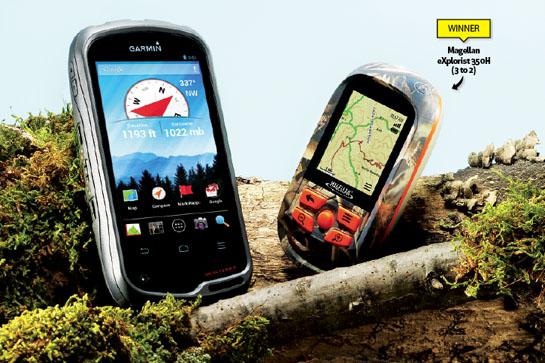 I still carry in my pack the first GPS unit I ever bought, a Garmin eTrex Vista. The reason it remains go-to gear is that it does what I ask: It keeps me found and gets me home with a minimum of fuss and fluster. It stores waypoints, it shows me a simple compass I can follow, and it is a power miser, going a couple of years on the same set of AA batteries.

I mention this in the context of two new GPS units–the Magellan eXplorist 350H and the Garmin Monterra–that I carried from Wyoming to British Columbia to Oregon last fall. Both devices represent the state of the art in handheld navigation, but neither is satisfied with simply showing me the way back to my pickup. The WiFi-enabled Garmin is the more elaborate of the two, and comes loaded a dizzying number of features based on the Android operating system. It also contains an 8-megapixel digital camera, an FM and NOAA weather radio, an MP3 and video player, 3D maps, and any Google Play app you care to download.

The Magellan is more single-­minded, focusing only on mapping and navigation capabilities, but it is loaded with maps detailing every acre of North America. Additional features show you hunt-unit boundaries, the best times to hunt, and satellite images of your hunting area. You also get the ability to mark rubs, scrapes, scat, and bedding areas.

Taken together, these GPS units have slightly more navigational horsepower than my phone loaded with a $5 topo-map app. Which raises the question: Why would I want a GPS that does everything but allow me to make a phone call? The reason, according to the GPS industry, is because we are leery of carrying our phones into steep, rocky, remote areas, the very places where we most need a GPS. Here’s a deep look at what each unit brings to the game.

The Garmin measures a whopping 3×5.75 inches and weighs 13 ounces with three AA batteries (with the rechargeable lithium-ion battery, it’s 11.7 oz.). It’s 40 percent larger than my iPhone 4s. The only saving grace is that the 2×3.5-inch touchscreen is crisp, bright, and provides a great platform for map and photo viewing.

The 5.2-ounce Magellan has a screen roughly half the size of the Garmin’s, but the unit is compact enough to tuck into a pants pocket, and it fits nicely in the hand. The Magellan, which runs on two AA batteries, is well armored and tough. On a Wyoming sheep hunt, the Garmin accidentally turned on in my pack and drained the battery.

For anyone used to the touchscreen protocol of a cell phone, the Garmin’s navigation is intuitive. The Magellan, meanwhile, uses an old-school joystick and buttons to move between screens and to enlarge or reduce map images. I found the Garmin’s galaxy of choices a little overwhelming, since I mainly wanted to use the navigation and mapping functions. But I also found the Magellan’s start-up screen–which asks me if I want to hunt, hike, or view maps–needlessly obtuse. Normally I just want to mark or find a waypoint. Both units take some time to master.

I would love to be stuck (note that I did not say lost) in the backcountry with the Garmin. It’s simply fun, with its ability to play songs and movies, tune in radio stations, display photos, and locate celestial bodies and constellations. The unit can accept SD cards, giving it additional mapping horsepower.

The more minimalist Magellan has useful tools, including a number of hunting-specific icons that allow you to tag treestands, remote camps, and game trails, and the ability to group routes and waypoints into “trips” that you name and can later retrieve as a unit.

The Magellan comes preloaded with street-level 2D road maps for all of North America, plus topo maps for the U.S. and Canada. The maps feature an overlay detailing boundaries for major hunting areas across the continent, and an alarm notifies hunters when they near a boundary. Magellan buyers get a 1-year subscription to the DigitalGlobe satellite mapping service.

The Garmin comes loaded with topo maps of the United States and the ability to upload additional maps–including the company’s BirdsEye satellite imagery, global maps, and third-party maps detailing landownership–either via SD card or subscription.

The guts of any GPS unit, besides the processor that powers the screen and software, is the chip that finds and keeps tabs on satellites. The Magellan is powered by a chip–the SirfStarIII–that combines high sensitivity with low power consumption. It’s extremely efficient, especially in its “suspend” mode, in which it continues to track routes and drop “breadcrumbs” while the screen is inactive.

The Garmin, meanwhile, is quick to find satellites and rarely loses contact, even in foliage or deep canyons. In addition to its GPS chip, it uses the Russian GLONASS system and its 24 additional satellites. Consistent reception trumps efficiency.

This is a hard category to evaluate, since the units deliver such different performance. The Garmin is cool, but at $650, it’s hard to justify what is basically a route-finding smartphone that can’t place calls. For a hardcore, stripped-down, hunting-­oriented GPS, the $250 eXplorist is a pretty good deal.