Better battery life has arrived for tracking your hunt, hike, and more 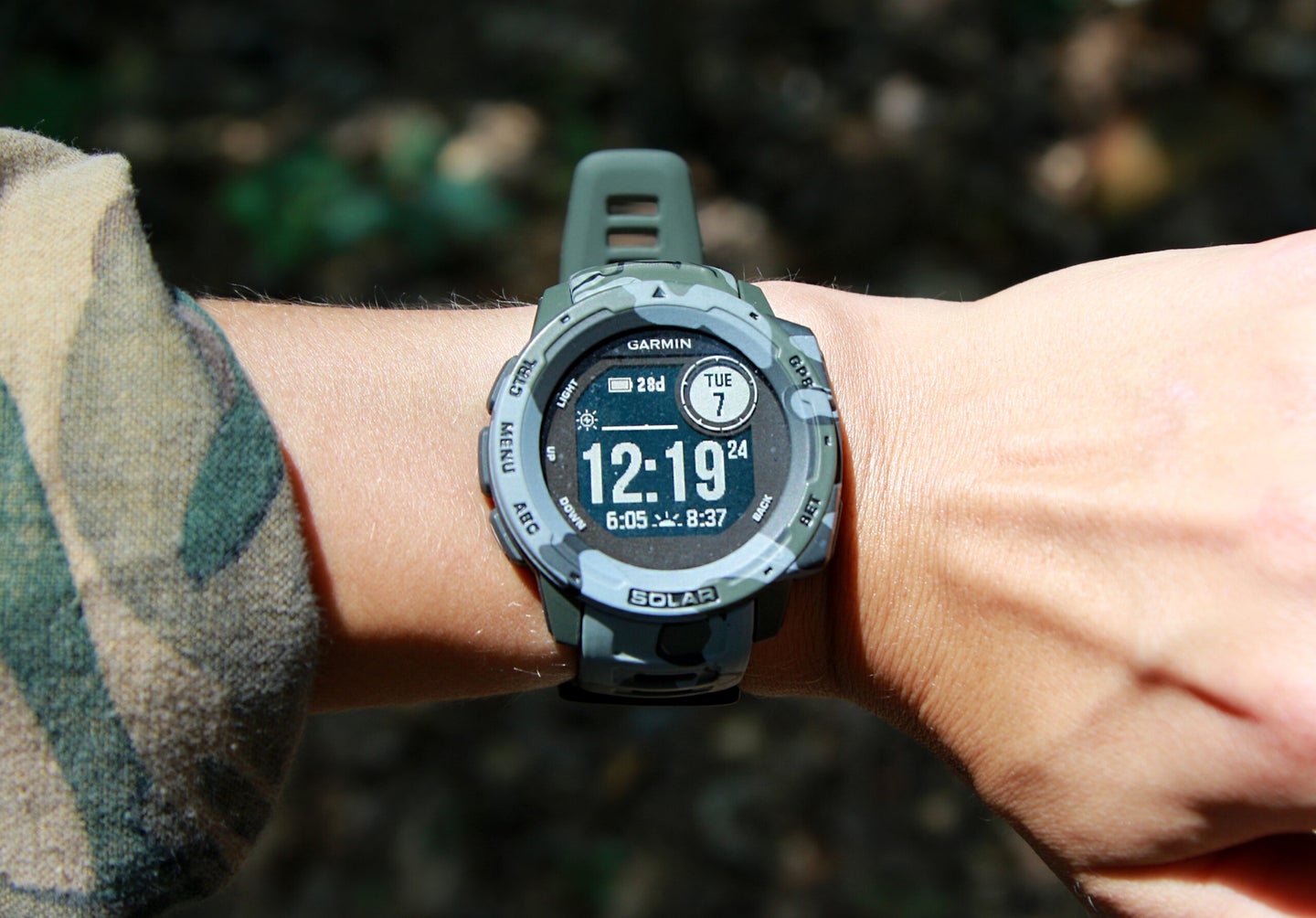 I was never much interested in smart watches until a few years ago, when I made an ill-advised pact at SHOT Show in Las Vegas. Despite never having run farther than a 5K, I promised OL contributor Brad Fitzpatrick that I’d run a marathon with him. At the very least, I figured, all that running would help me get in shape for elk season that fall.

I’m a reluctant runner at best, and decided I needed something to keep me accountable—something more than the glitchy fitness trackers I’d previously tried. I bought a Garmin GPS watch and never looked at another brand again. I do wonder, however, why more hunters don’t wear one, or something like it. They don’t seem to have gained much traction in the hunting and fishing world, despite their usefulness in the woods and on the water.

These watches have always been packed with plenty of useful features (more on that in a bit), but Garmin just announced the newest one: solar charging.

This is excellent news for anyone who spends any time off the grid, or just generally hates having yet another device to worry about charging. I always pack the charging cord for my watch, forget to charge it in the scramble to get on the trail, and head into the mountains for a 6-day hunt with a 6-hour battery life. All week long I’ll glance at my watch trying to check legal light or how far I’ve gone, only to remember the watch is dead.

But not anymore. After fully charging the solar Instinct Garmin sent me to test (with the USB charging cable), the battery meter read 28 days. Any hunter who wears a traditional watch will find this laughable, true. But if you’ve got a smart watch, or want one that won’t cost as much as a new rifle, it’s a game changer.

Garmin actually introduced a solar smart watch last year—the fenix 6x Pro Solar—and now its rolling out more. The available solar models include the new Instinct (in classic, Surf, and Tactical editions), the fenix 6 series, and the tactix Delta. You can charge your solar-powered Garmin solar the usual way, with the proprietary USB charging cable, or your can make sure it gets enough sunshine to reduce the frequency of traditional charges. The handy Solar Intensity display tracks how much sunlight the watch is getting while you’re out and about.

According to Garmin, the new solar Instinct boasts up to 24 days in smartwatch mode while worn indoors, and more than 50 days with sufficient solar exposure. I haven’t had my solar Instinct long enough to test this yet, but in theory, its battery life is unlimited if your watch gets enough sunshine while in Battery Saver mode. Like Garmin’s other smart watches, the more you ask of your watch, the faster the battery will run down. Heavy GPS use does this, like tracking hunts or navigating through the woods. There’s a pile of GPS activity modes for the Instinct, which you can customize depending on what you like to do outside. This includes detailed stats—steps, calories, distance, pace, etc.—and GPS tracking for hunting and fishing, as well as running, hiking, mountain biking, kayaking, and more.

I tried GPS tracking several trail runs and an afternoon of scouting under the Hunt mode. In one week, my solar Instinct’s 28-day battery life dropped to eight days, but that’s unsurprising given my GPS usage, and how much I was working inside that week. To charge it, I stuck the watch in direct sunlight and checked back an hour or so later. It had added three days to the battery life for a total of 11 days. Three days is a big deal on a backcountry trip.

So far, I can’t find a thing to complain about on the solar Instinct. It’s got all the essential smart-watch readouts I could ever want for a day in the deer stand: sunrise, sunset, compass, altimeter, barometer, and weather, which includes the day’s high and low temperatures, current temp, windspeed, and wind direction. And, of course, it tells the time. Keeping this info on my wrist keeps me from checking my phone in the stand and getting distracted by things like text messages or, say, the Internet.

If I’m scouting, camping, run-and-gunning, or hunting out West, that’s when I want the fancy features. Want to know the area of a potential food plot, especially at a site that’s not on onX or other satellite imagery yet? Turn on the Area Calculation and walk the perimeter. Want to make sure you don’t get lost? Turn on the Track Me function. Want to find your way back to camp? The Navigation feature gives you plenty of options: use a compass heading (what Garmin calls Sight ‘N Go), input coordinates, navigate to a saved location, and more. The next time I hunt the backcountry, I’ll turn on the Expedition mode, which offers increased GPS functionality with a longer battery life. Testing this mode now on a full charge shows a recalculated battery life of 808 hours, or about 33 days.

At $399, the Instinct is the most affordable of Garmin’s three new solar watch models. It’s in that sweet spot where you get plenty of the features you want without paying for the ones you won’t use. If you’re prone to getting lost, or just want to be safe, the Instinct offers plenty of navigational guidance without having to upgrade to the robust topographic mapping features of the solar fenix 6 series ($850). And a solar tactix Delta would be badass, but most hunters don’t have $1,099 lying around for a watch, much less need features like night vision compatibility or a kill switch.

Fitzpatrick and I haven’t run our marathon yet, but I did get in shape for elk season that year. I also got lost that season—turned around while packing out meat through the tangle of headwalls and coulees in the Missouri River Breaks. My first Garmin didn’t have any of the navigation features, and our little handheld GPS crapped out. Now I won’t go into the woods without my smart watch. And these days, it doesn’t seem to matter if I forget to charge it before I leave.