Over the weekend a man-eating leopard crept into Gauhati, a city in eastern India, and tore through the streets pouncing... 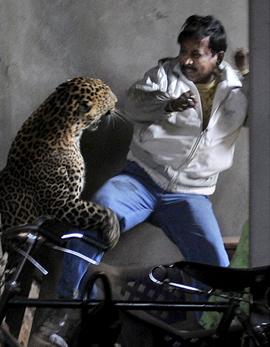 Over the weekend a man-eating leopard crept into Gauhati, a city in eastern India, and tore through the streets pouncing on unsuspecting pedestrians. It killed one person and mauled four others, including this man who had his scalp torn off in the horrific attack.

Photos taken by a local newspaper photographer show the man bracing just as the leopard pounces, it’s left paw making a sweeping hook toward the man’s head. The next photo shows the man after the swipe, his scalp sliced to the bone.

Fortunately the man survived and the leopard was eventually captured. Wildlife officials told the Associated Press that it would be released at a wildlife park 120 miles west of the city.

Leopard’s are one of the most dangerous animals on the planet. And some experts even consider them more dangerous than other big cats like lions and tigers because of the leopard’s speed, power, stealth and ferocity toward humans. These photos illustrate the incredible quickness of a leopard. Its swipe of the paw was so fast, it happened between frames.

In India, it’s not uncommon for leopards to wander into cities or villages. Last July a leopard stalked into the Indian neighborhood of Prakash Nagar and mauled seven people before it was captured. That leopard was also captured and released into a wildlife area.

Find the details of that story and information on how to avoid a leopard attack here.