The Buck, the Bowhunter, and the Lion

A bowhunter tracks his buck, but a cougar has already claimed the kill 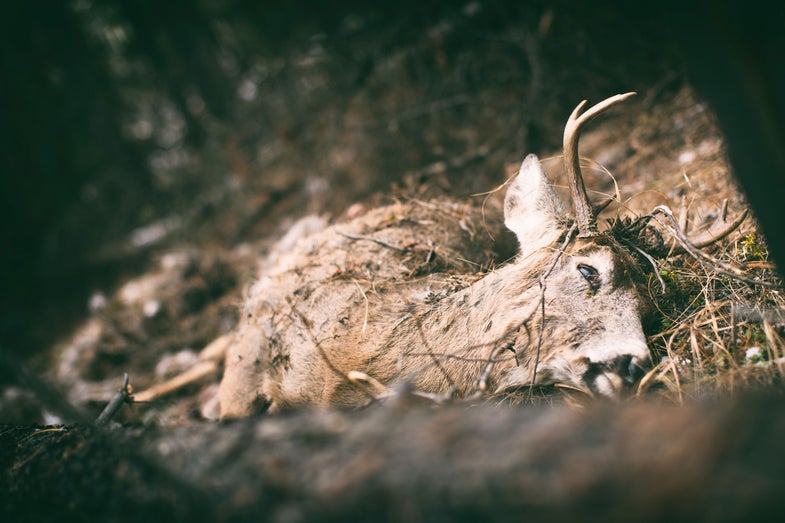 I had always wanted to rattle a buck in from the ground.

As a kid, hunting in Ontario’s big woods, I sided with the majority of the locals in the belief that calling in deer was a hoax invented by guys on TV and in magazines to sell more grunt tubes and rattle bags.

Yet there I stood, with two knuckles bleeding from a collision with the dusty dowels in one of those very rattle bags, staring through towering pines at a young whitetail buck. He stared back at me from 60 yards away, searching for the two deer he’d heard battling just a few minutes ago. Clouds of breath drifted into the alpine air with every frosty breath, but aside from the crystals in the air and my heart smashing against my ribs with a rare urgency, I was perfectly still.

The deer had caught me off guard, so I wasn’t in a great position to draw my bow, or to shoot, so I would have to catch a break if I were to kill it. After probably ten minutes motionless, the buck continued cautiously towards me, never turning broadside, and keeping a careful eye on me. At 40 yards, he stopped again, and the stare-down continued. It was dead silent, but I thought I could hear something downhill to my left. I wondered if it were another buck, but I didn’t dare turn to look. Thankfully, the deer did instead, and I took advantage of the distraction to draw my bow. When he finally closed to 25 yards he turned to offer a shot, and I put an arrow through him.

The deer bounded off, and I was confident in my shot. The sun had disappeared behind the mountains, and I realized just how cold I was with the nine hard miles worth of sweat soaking my clothes. I waited as long as I could, and then found my arrow. When I picked it up, it was covered in slime from his paunch. I replayed the shot, but I knew that regardless how good it looked or felt, that I couldn’t force the issue and risk bumping a gutshot deer in an endless tract of forest. I would have to back out, and return in the morning to recover him.

As stealthily as I could, I headed down the mountain. The deer had gone the same direction I had to, so I worked to give it as wide a berth as possible as I crept downhill. Anxious that I would spook him despite my best efforts, I kept my eyes trained in the direction he had run off. Suddenly, I saw movement. It looked unusual as it moved through the trees, a lighter color of brown, and a measured, predatory gait. As it slipped through a wider gap in the pines, I realized, startled, that it was a mountain lion. The lion disappeared into the trees, leaving me thrilled that I had seen a wildcat—a rare occurrence even in the heart of their habitat. That thrill, however, quickly turned to dread as I realized that it was headed in the direction my buck had just fled.

Understanding the carnivorous potential of the cougar, I was discouraged. I called a handful of friends, and they all told me the same thing: The deer was dead, probably buried, and a good amount of meat would be missing. We all weighed the risks in returning to recover the kill, and in spite of the full-throated protests of both my girlfriend and mother, I called my friend Brett Knox, loaded up with bear spray, and headed back the next day.

It was spooky, hiking back in through the towering pines that creaked eerily in the breeze. Thankfully, there hadn’t been any precipitation overnight, so we picked up the blood trail of the deer with relative ease. I was reassured to see some pink specks of lung blood on the pine needles, but there was a sense of foreboding as we picked up the story where I had left it the night before. With one set of eyes on the lookout, and one to the ground, we moved slowly through the understory.

“This isn’t a good sign,” I muttered to Brett. The sparse but consistent blood trail had vanished, but it didn’t take long to understand why. As I looked up I saw a scene that was quite unlike anything I’d come across in the past, and certainly not what a hunter hopes to find at the end of a bloodtrail.

There was a trail with an unbelievable amount of hair, and at its end, in the middle of a meticulously raked circle, was a heap of pine needles with a single protruding antler. Pulling the deer out from under the pile, we were relieved to see that quite a bit of meat remained despite the lion’s best efforts. As I took the front and back quarter that remained intact, and filleted the neck meat, round roast, and back loin that remained, I noticed that the spine of the deer was broken in half.

The broken spine, combined with the fact that we found the buck only 65 yards from where I had shot, led us to the conclusion that the cougar killed the deer before my arrow had. The deer had taken a path I didn’t expect. Chills ran down my own spine as I realized that I’d walked a mere 15 yards from the carcass the night before. When I had seen the cat, it was actually leaving the kill, as opposed to pursuing the wounded deer, as I’d concluded.

Hiking back to the truck with half a buck in my pack, it dawned on me: I remembered the branch I had heard break downhill, how it had distracted the deer, and how it allowed me to draw my bow and take the shot. As disappointed as I was to only recover a portion of the meat, I realized just how unique it was to share my kill with the unlikeliest of hunting partners.