How to Make Sycamore Syrup, Easy And Cheap

If you’re familiar with the practices of maple sugaring, then it’s an easy transition to the sycamore tree as a... 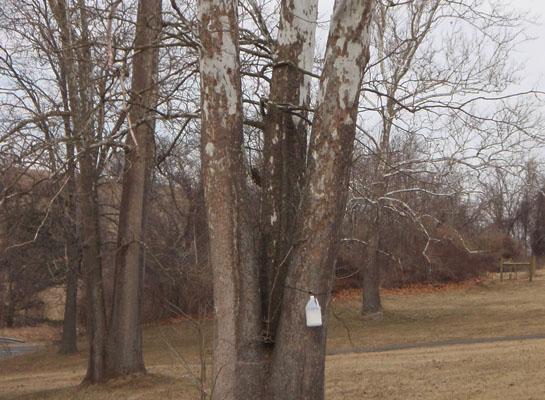 If you’re familiar with the practices of maple sugaring, then it’s an easy transition to the sycamore tree as a sap source. The act of collecting sap for drinking water and syrup dates back centuries, and it is still a valid way to get some calories and clean water, whether you’re in survival mode or tapping your backyard trees for fun.

The native range of the American sycamore tree covers much of the eastern U.S., although you can purchase seedlings from tree growers and plant them virtually anywhere in the lower 48. Sycamores can be found growing wild in all states east of the Great Plains, except for Minnesota. Sycamore (Platanus occidentalis) is very easy to spot in winter, even at a distance. The lower half of the tree has a mottled mixture of grey and tan bark. Then, rather abruptly, the tree bark changes into a smooth white bark, with a few scales of tan and grey sporadically clinging to the white. Another identifier is the the sycamore’s seed balls, which are the size of golf balls and light brown in color. They hang from the tree’s twigs and almost look forgotten Christmas ornaments.

To tap your local sycamores you’ll need a portable drill (either cordless or a classic brace & bit), a 7/16-inch drill bit, some ½-inch vinyl tubing, and some clean containers to catch the sap. Plastic drinking water jugs are fine, but I’ve started using plastic vinegar jugs, which have thicker, stronger walls and shouldn’t burst due to freeze expansion if your area suffers a cold snap. The sap is just starting to run now where I live in Virginia, and points further south should be well into sugaring season, which lasts about one month.
Once you’ve located a stand of sycamores, drill a hole about three inches deep on the south side of each tree. Angle your bit upward as you drill. This encourages the sap to drain quickly. Large trees can hold multiple taps, but they might not be as productive. I tend to favor trees about a foot wide. Clean out each drill hole with a twig to remove any wood shavings. Insert one end of the tubing into the hole and the other tube end into your container. Sap flows best on days that are above freezing following nights during which the temp dropped below freezing. Collect your sap each day to avoid overflowing containers. You’ll need ten gallons of sap to make one quart of syrup. If that sounds like a lot, don’t worry. Each productive tree can yield one gallon of sap per day at the height of the sap run. That means with ten taps you can produce a quart of syrup every day, and 20-25 quarts of syrup over the sugaring season. Sycamore sap can be blended with other tree sap, like maple, birch, and hickory.

As for the boiling process, grab the largest pot you own, a reliable heat source, and head outside. Boiling indoors is never a good idea, as every surface will soon be covered with condensed water. Boiling can be achieved over a wood fire or propane burner. Bring the sap to a boil and keep it boiling until it visibly thickens. It should look like new motor oil when it’s close to done. Dip a spoon into the syrup and pull out one spoonful. Allow it to cool for a moment and then see how it pours. If the syrup forms a curtain-like sheet off the spoon edge, then you are done. If it is still runny, boil off more water. Keep your finished syrup in the fridge to prevent mold, or can the syrup in jars in a water bath canner for long-term storage.

Are you sugaring this season? Which trees are you tapping? Tell us about it in the comments.