Forget Christmas: The time to splurge on a new gun is before opening day. Any of these five bolt-action rifles... 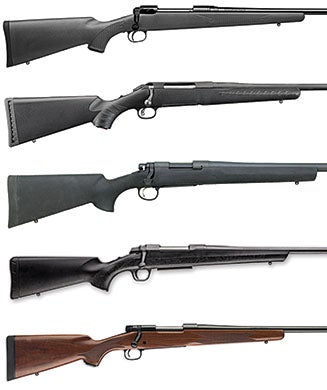 Forget Christmas: The time to splurge on a new gun is before opening day. Any of these five bolt-action rifles would make a good companion in deer camp, no matter your budget.

This newest addition to the Browning A-Bolt family is less expensive than its older siblings, yet it retains much of the classic A-Bolt DNA. The AB3 has a short 60-degree bolt throw, feeds from a detachable magazine, is equipped with a good trigger and recoil pad, and has a tang-mounted safety. The composite stock is not very handsome, but it is tough. It comes in four calibers: .270 Win., .30/06, 7mm Rem. Mag., and .300 Win. Mag.

This rifle is an ugly little brute, but it does a hell of a job putting bullets in tiny clusters downrange. The 700 action is synonymous with accuracy, and this particular iteration, with its Hogue stock and stiff 20-inch barrel, delivers more performance for the price than any other 700 in Remington’s lineup. It comes in just two calibers, .223 and .308, but there’s no deer in the world that won’t succumb to a .308 through the ribs. The X-Mark Pro Trigger is crisp and consistent.

The Ruger American is without question one of the most remarkable values ever to grace the racks of a gun store. It is inexpensive, functional, and more accurate than many custom rifles costing $2,000 or more. I’ve shot several of them and all have shot groups better than 1 inch at 100 yards. The trigger is good, the rotary magazine is easy to load, and the rifle balances great while being carried or fired. It comes in six calibers, ranging from .22/250 Rem. to .30/06.

This rifle doesn’t offer much in the way of frills, but what it does bring to the table is a beautifully made barrel and an action that optimizes both economical construction and shooting accuracy. The 200’s precision is enhanced by both the use of a barrel nut to affix the barrel to the receiver, allowing for precise headspacing at the factory, and the two-piece bolt, which has a floating bolt head that self-aligns with the cartridge head as the chamber is closed.

The elegance of the Model 70 has enchanted sportsmen for decades, and the newest M70 Sporter exhibits those same charms. The graceful stock and tasteful combination of walnut and blued metal give the Model 70 a flair that dull-metaled guns with plastic stocks just can’t match. The updated trigger isn’t as robust as that on the original M70 design, but it is an improvement over the heavy triggers Winchesters had until a few years ago.