Shooting Tips: Rifle Skills That Will Make You a Better Hunter

Get in shape for this season 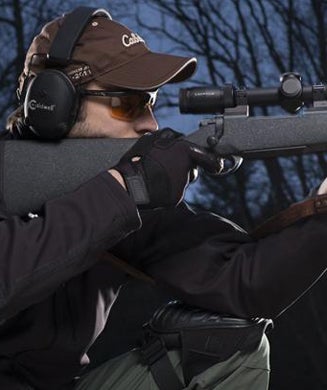 It’s the time to elevate your skills for next hunting season. We reached out to two authorities to assemble this guide. Both are accomplished hunters, shooters, and competitors. Wayne Van Zwoll discusses the fine points of practical field marksmanship while Bryce Towsley interviewed some of the country’s best shooting instructors to create the drills illustrated here, most of which can be done at ranges of 100 yards or less. Good shooting.

Focus While Practicing
Good shooting starts in your head. Dry-firing can be as valuable as live-fire practice. But simply pulling a trigger isn’t a drill. “Make each shot count,” says Lones Wigger, who’s won a truckload of shooting medals, including Olympic gold. “When I practice, every shot gets my best effort, down to the smallest detail. Consistency matters. Such focus is exhausting. When I can no longer concentrate, I quit for the day.”

As with any discipline, bad shots in practice amount to practice in bad shooting. Call your shots before you see where they’ve hit. Not all will punch the middle, but if you feel the rifle hop to 10 o’clock at let-off, and a hole appears there, rejoice! When bullets hit where you don’t predict, suspect a flinch or rough trigger squeeze. Slow down. When practicing, a bull’s-eye and a couple of well-called bloopers beat a target sieved by holes you can’t explain. And with a hunt on the line, a slow hit trumps a fast miss.

Improve Your Positions
Probably the best (and most affordable) way to practice different shooting positions is with a rimfire rifle that approximates the weight and feel of your deer rifle, and a brick of .22 LR ammo. Fire at paper 50 yards away. I tape 2-inch squares of white bond on corrugated cardboard. Prone, you’ll easily keep the reticle inside this 4-minute mark. A low sit should prove almost as steady. Try three sitting positions: crossed-leg, crossed-ankle, and with your knees tent-like, comfortably spread, heels grounded.

The crossed-leg sit puts your center of gravity very low. This is great when you’re 16, with the flexibility of a rope. Age makes this pose as pleasant as a cramp. You can condition muscles into compliance by supporting your rifle Buddha-like while watching TV. Crossed-ankle is faster and easier–but you must still lean far over, with the flats of your elbows on your knees. Because the “footprints” of crossed positions are smaller than that of the knees-up option, the latter works better when shooting from hills and on uneven ground.

Kneeling, you’ll find the rifle swings from 3 to 9 o’clock and back. Counter that by twisting your left (front) foot to parallel your right leg, which should be at about a 45-degree angle to the target. Your weight, and the rifle’s, will hold the foot in place. That shin should be vertical and bear about a third of your weight. Half of your heft is properly on your tailbone atop your right heel, and the remainder is on your rear knee.

Whether sitting or kneeling, bone-on-bone support is key.

Master the Sling
Shooting prone, sitting, or kneeling, you’re smart to use a sling. Unlike a carrying strap, a sling has an adjustable loop. It tugs fiddle-string-tight from the front swivel to above your triceps, pulling the rifle into your shoulder, where bigger muscles can better support it. The sling hangs loose from your arm to the rear swivel.

You’ll want a leather sling like the Brownell’s Latigo I use. Nylon is cheaper but will slip—not what you want when a $6,000 elk hunt hangs on your shot. While the Harris bipod is popular, and a fine aid in low positions, it adds weight and can chafe when the rifle is slung for hiking. Besides, you need a strap or sling for carry anyway. So trade that canoe-paddle cowhide with the colored elk head on the clavicle pad for a Latigo sling.

A sling is of little or no value when you’re shooting off-hand, because your left elbow isn’t anchored. The “hasty sling” is a technique that is used off-hand with a strap or sling wrapped around your arm. It can help deaden tremors, but you’ll likely shoot as well without it.

Zero Right
Before you hunt, check your zero from all hunting positions. A solid rest directs your rifle—and bullet impact—skyward as the bullet sets up vibrations during its passage down the bore. Off-hand, and even in bone-supported positions, the barrel can dip as you pressure the trigger, and as the rifle recoils. A taut sling routinely pulls my point of impact to 7 o’clock. I often zero from slinged-up prone with this impact shift in mind, where on good days I can hold a minute of angle. When one rifle in .300 Winchester printed 5 inches higher at 200 yards from a bench, I stuck with the “sling zero.” If you use an improvised rest afield, be sure to pad the forend with your hand, and never rest the barrel on anything. Hard surfaces cause the rifle to bounce, tossing the bullet wild.

Be sure that you don’t set your zero too far downrange. Most cartridges merit a 200-yard zero. Your bullet will strike 2 to 3 inches high at 100 yards, and about that low from 250 to 280. You can aim point-blank to 250 yards. While some flat-shooting loads permit a 250- or even a 300-yard zero, it’s a mistake to put bullets more than 3 inches high at mid-range, where many shots will likely come. More game is missed high than low. Increasing the gap between sight-line and arc at mid-range is particularly unwise in light of the tendency to shade shots high when animals look small.

Know Your Limits
Flat-shooting cartridges have been around since Charles Newton’s .250 Savage cracked 3,000 fps in 1913. Scopes got markedly better after WWII. Now top gear can drill softball groups at half a mile. But on a hunt, you’re not nipping paper from sandbags. You must make one cold-barrel hit with a bullet built to kill game. Maximum effective range depends more on conditions–wind, distance, animal presentation–than on hardware. Most of all, it depends on your marksmanship.

My personal rule for hunting: I shoot only if under current conditions I can make a lethal hit 90 percent of the time. Think of a deer’s vitals as a 9-inch sphere–a soccer ball between shoulders. Big bucks (and game like elk and moose) offer a bigger target. But as in politics, modest expectations afford a useful margin. In fact, one reason hunters miss (or, worse, make fringe hits) is that they don’t pick a small mark. An entire animal is too large a target. Narrow your focus to a spot on the ribs or shoulder. Aim small; miss small. The longest poke I’ve taken at game put the bullet a hand’s width from my aiming point–still well inside the vitals. Prone, on a windless evening, I didn’t commit to that shot until the reticle settled into a very small orbit on a forward rib.

Shots at running animals are difficult at best, and a bad bet at a distance. A pal who took a running elk at 300 yards told me when pressed that the bullet had struck high in the neck, not through the lungs where intended. He could just as easily have missed or wounded.

Go Low-Mag
Some hunters think a powerful scope will stretch their reach. While you can hit better what you see clearly, you shouldn’t need more than 6X even when conditions justify a long shot. Some years back, when I got a 300-yard chance at an elk, I left my 3-9X scope at 3X. I shot from prone with a taut sling, and the bullet struck right where expected. Remember that high magnification reduces field of view and light transmission, while emphasizing pulse bumps and muscle twitches. You may find shots easier and faster with your scope dial at a modest setting, and you’ll give up little if any precision. Consider that with iron sights, competitive shooters don’t see the bull’s-eye yet achieve great results. It’s okay if your reticle covers the spot you want to hit.

Fire (Only) When Ready
A scope field crammed with antlers can make you do goofy things, so think before you fire. Is this as close as you can get to the beast? Closer is better. Big targets are more forgiving. Should you wait for a better presentation? Can you reach a nearby rock or log, or shed your pack to rest your rifle on? Most hunters have more time than they use. While unnecessary delay can cost you, getting your rifle to settle is crucial. Ditto a controlled trigger pull. Take your time as you drop into the position you practiced, arranging your body so the rifle points naturally at the target, and breathing deeply as you switch off the safety. If you must fire off-hand, aim only when the shot is imminent. Holding the gun tires your muscles, which will then shake, bouncing the reticle all over the landscape.

After the shot, cycle the action. You should be closing the bolt on a fresh cartridge as the rifle comes out of recoil. If you were properly positioned for the first shot, you won’t have to shift your body for a follow-up unless the animal has dashed some distance.