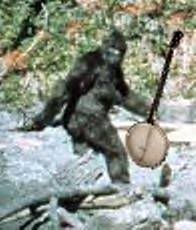 Self-proclaimed North Carolina mountain man Tim Peeler told Cleveland County authorities he was using his homemade predator call to attract some coyotes within shooting range when a much larger–and upright–creature came strolling up his secluded pathway on June 2.

Even though it was his first encounter with a blonde, 10-foot-tall wild critter, years of backwoods living has taught Peeler that he needed to be the aggressor, rather than allowing Bigfoot to have his way with him.

That would be too much like Deliverance, don’t you know?

“I come out here and rough-talked him and run him off,” said Peeler. But then the creature returned.

So Peeler let him know that he meant business

“I said, ‘Git away from here! Git! Git!’ and he went right back up that path again.”

And that was that end of it. At least, that’s his story.

Responding to Peeler’s report of a suspicious person, Cleveland County Sheriff’s Department Sgt. Mark Self admitted it was his first-ever Sasquatch call.

“If we see something, we’ll try to capture it and take it into custody,” he said.