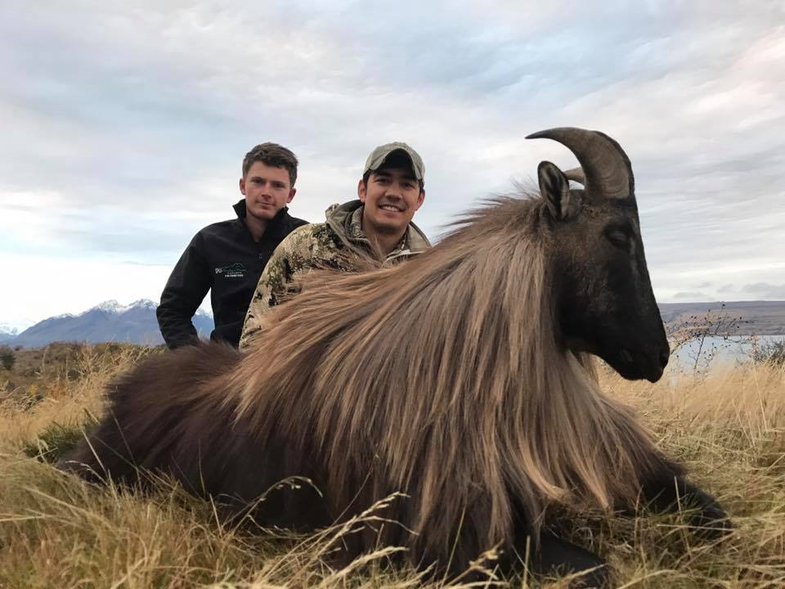 I turn the riflescope down to the lowest power, adjust the bipod, and try to settle into a stable shooting position on the steep rock face.

“He’s heading right for us,” says my 21-year-old guide Ben Knudsen. “If he pops over our ridge, he’ll be 50 yards away. Take the first good shot you get.”

We’ve been hiking and climbing since 8:30 this morning to get within rifle range of the bull tahr we are after, and now it is about 2:30 p.m. Through certain stretches of our approach we had to scramble across rock faces and drag ourselves, vertically, through thick, prickly vegetation. Knudsen, a motocross racer and new hunting guide, had carefully navigated his way around the steepest bluffs to get us where we are now—about a few hundred yards below the peak of a no-name mountain in New Zealand’s Southern Alps.

At the very end of our stalk, we caught a quick glimpse of the bull before he disappeared into a gulley, walking in our direction. The wind is in our favor now and sunset is still three hours away. So I am happy to wait for the bull to reappear, if only for the chance to rest my tired legs.

King of the Mountain

Red stags (or red deer, as the Kiwis call them) capture the most attention when it comes to big-game hunting in New Zealand with their regal racks and famous roar. But for outdoorsmen looking for a test-your-limits hunt in the mountains, it doesn’t get much better than tahr in the Southern Alps. (Read more about mountain hunting in New Zealand here).

Himalayan tahr are native to Tibet, Nepal, and India, but were introduced on New Zealand’s South Island in the early 1900s. With no natural predators, tahr quickly populated the region and now their range stretches across 1.7 million hectares of the central South Island. Tahr and other introduced game species have thrived so well that New Zealand requires hunters to have a license, but does not require tags for individual animals. So, legally, a licensed hunter can shoot as many tahr as his legs will carry him to. (You can find the NZ Parks and Recreation tahr hunting page here.)

In fact, in some places the tahr population has grown so dense that the government culls them with helicopter sharpshooters in an effort to keep them from destroying habitat. My outfitter, Sam Radovonich of Southern Peaks Safaris said that 80 nannies had recently been culled by helicopter from the drainage next to the one we were hunting.

In the U.S., nuisance species like wild pigs, coyotes, or resident geese tend to garner disdain from the public and a kill’em-all attitude from hunters. That’s not the case with tahr in New Zealand. Kiwi hunters love tahr: their local sporting magazines were covered up with bull tahr stories and photos just as our magazines feature trophy whitetails. New Zealand tahr are managed as a nuisance species, but at the same time, they’re revered as a trophy big-game animal.

That might be because tahr are such cool critters. Bulls sport luxurious manes and are much bulkier than you might expect: a big bull can weigh 300 pounds. Their horns don’t seem impressive (a trophy will measure 13 inches) until you get up close and run your finger over each dark ring that represents a hard-earned year in one of the most ruggedly beautiful landscapes on the planet.

In mid-May—which is fall in New Zealand—bull tahr go into rut and battle for dominance. Bulls fight by locking horns and spinning wildly in a circle. The winner tosses the loser down the mountain.

Calling the Shot … and the Chopper

Our bull finally does show himself, but not at close-range like we expected. As I watch our ridge, Knudsen scans the bluffs above us and finds the bull again. Instead of crossing the gulley, he had side-hilled the slope. The tahr is now looking down at us from 334 yards.

We wait for a few minutes for him to turn broadside and then I settle the crosshairs square on the blond mane covering his shoulder. But I pull the shot to the right, and the bullet misses the shoulder blade but finds the vitals behind it.

This is a problem. The goal is to drop a tahr where it stands so he cannot run off into a bluff system that we can’t climb. Even a mortally wounded bull can skip across a rock face that a human would need climbing gear to traverse.

And that’s just what this bull does. He runs only a hundred yards or so before dropping in a matagouri thicket. Through the scope I watch him go down and give one final kick. But when I pull away from the optic I can see that he crossed an impassable (for any mortal human) rock bluff. The only way to reach the bull by foot is to climb down a gulley that drops 300 feet straight down and shoots straight back up the other side.

Knudsen is pretty sure he can safely cross the gulley (he’s got a climbing rope in his pack) and get the bull caped and quartered by nightfall. But neither of us are so sure about my odds of surviving the climb. And even if I did, we’d still have to make it off the mountain in the pitch dark.

So, we fall back to Plan B: calling in a helicopter. Kiwi hunters use helicopters the way U.S. hunters use their pickup trucks or ATVs. The South Island’s mountains are so rugged that much of the region is inaccessible except by helicopter. It’s common practice for pilots to fly hunters to a summit or basin and then pick them up after a day (or week) of hunting. You can rent a helicopter just as you might charter a float plane for a backcountry trip in Canada or Alaska. But it’s not cheap. And for mountain hunting purists, it feels a little like cheating.

But by the time we climb high enough to find cell reception, call Radovonich, figure out the details of the pickup, and then find a somewhat safe place for the pilot to land, I’m anxious just to recover the bull by any means necessary.

The pilot arrives and sets the helicopter down on a level piece of ground that’s about twice as big as my dining room table. We pile in and he drops Knudsen and Radovonich (who came along with the pilot to help with the recovery) on the other side of the bluff to where they can reach the dead bull. They drag the bull down to a flat spot, we land again, and they stuff the tahr into the helicopter’s search-and-rescue stretcher container. And just like that we’re airborne and cruising over the bluffs, brush, and riverbed that Knudsen and I had spent all day battling.

When we land, I finally get to see the bull up close. We snap some photos and load the bull into Radovonich’s truck as tourists from Japan line up nearby—they’re taking a sightseeing tour from the same helicopter that just flew us off the mountain. I hope they get to see a big bull tahr watching over his nannies on some distant peak.

When we land, I finally get to see the bull up close. We snap some photos and load him into Radovonich’s truck as tourists from Japan line up nearby—they’re taking a sightseeing tour from the same helicopter that just flew us off the mountain. I can’t tell what they think of the dead tahr, but I am certain that there are scores more, tucked away in the range we just left behind. I hope they get a chance to see a big bull tahr too, still on the hoof and watching over his nannies on some distant peak. 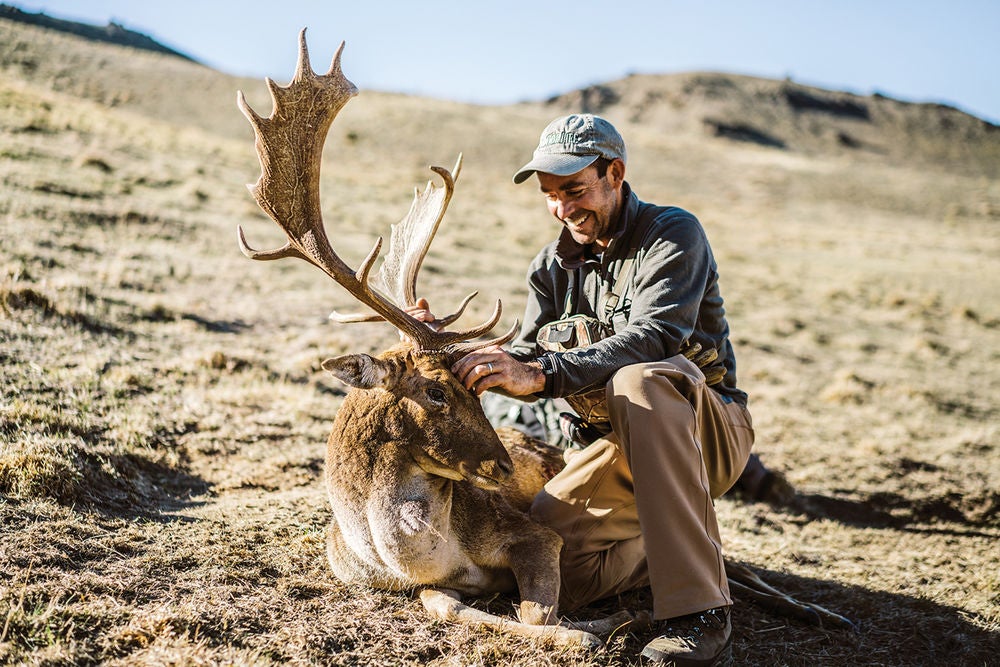