The South Dakota state lawmaker who introduced a bill to require firearms ownership for adult residents admits it won’t pass... 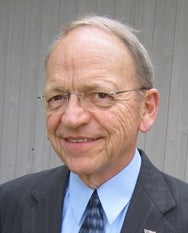 The South Dakota state lawmaker who introduced a bill to require firearms ownership for adult residents admits it won’t pass Constitutional muster, but he wanted to make a point about the “individual mandate” included in the health care reform bill passed by the U.S. Congress and signed by President Barack Obama in 2010.

Titled “An Act to provide for an individual mandate to adult citizens to provide for the self defense of themselves and others,” the bill would require every South Dakota adult 21 or older to buy a firearm within six months of becoming law.

But the bill’s author, Rep. Hal Wick, R-Sioux Falls, and its four additional co-sponsors know the measure doesn’t have the slightest chance of passage and will likely die during committee hearings.

“It’s no more constitutional than the federal health-care law,” Rep. Wick told the Mitchell Republic newspaper this week. “To be honest with you, it won’t pass. It’s unconstitutional.”

Rep. Wick, an avid hunter and firearms enthusiast, said the idea for the measure came to him while discussing the health care bill with friends in hunting camp this past fall. His hunting buddies reasoned that if the government could order people to have health insurance, why couldn’t it mandate they own a firearm?

“I thought, ‘Why not?’ ” Wick said. “It makes just as much sense for South Dakota to make the requirement and provide for everybody’s protection.”

Ironically, less than an hour after introducing House Bill 1237 on Monday, Jan. 31, Rep. Wick learned that Florida District Judge Roger Vinson had ruled the Patient Protection and Affordable Care Act of 2010 unconstitutional in its entirety.