U.S. Rep. C.W. Bill Young of Florida has joined a handful of other Congressmen in calling on the Obama Administration... 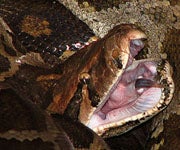 U.S. Rep. C.W. Bill Young of Florida has joined a handful of other Congressmen in calling on the Obama Administration to ban the interstate transport of Burmese pythons and other large, dangerous reptiles.

The idea is to keep Florida’s snake problem from spreading across state lines by making it a crime to transport live snakes. Unfortunately, it may be too late for this legislation to have much of an effect on the ongoing python invasion.

As we have reported in the past, Florida is overrun with pythons – some estimates put the number of serpents in the state at hundreds of thousands. The Burmese python is an invasive species that has turned Florida’s native ecosystem upside down. The snakes have no natural predators, eat almost anything they can catch, somehow survive freezing temperatures and cost the state millions of dollars each year in eradication efforts and damages.

According to a new book by Michael E. Dorcas and John D. Wilson, the python problem is not going away. Invasive Pythons in the United States: Ecology of an Introduced Predator details how the Florida snake problem came about through a lack laws on the importation combined with irresponsible pet owners.
However, the snakes being caught in Florida now are not escaped or released pets; they are wild born. Several generations have passed since the first snakes were freed – nobody knows how many – and each generation seems to do better in the wild than the last. Because of this, Dorcas and Wilson conclude that “pythons are unlikely to be eliminated within the foreseeable future,” and “the impacts they will have and the extent of their spread remains to be seen.”

One theory holds that the snakes could establish themselves as far north as Virginia and as far west as Texas. The only things that will keep them from spreading is a lack of prey – which seems unlikely, considering they can and will eat almost anything. Long periods of freezing temperatures and intense hunting could help. But considering how well hunting has slowed the spread of feral pigs, the future of the southern United States will probably be crawling with pythons.