The annual Florida Python Challenge awarded $10,000 to the snake hunter who removed the most pythons from the Everglades 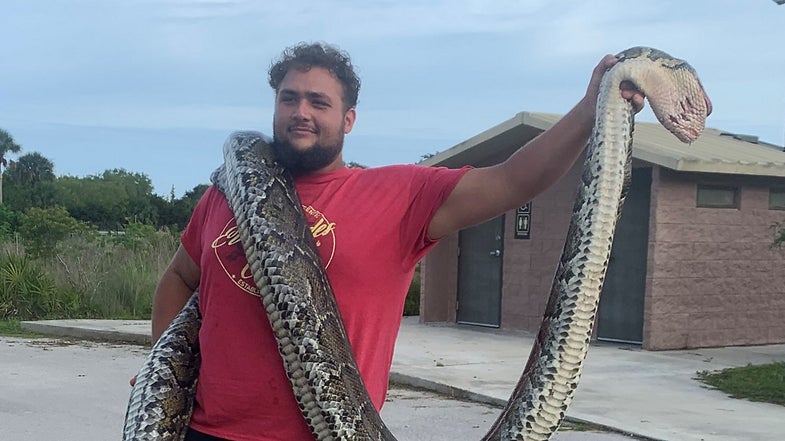 A total of 223 non-native Burmese pythons were removed from the Everglades during the 2021 Florida Python Challenge, an annual event organized to incentivize participants to help remove invasive species from the fragile Everglades region with cash prizes. The 10-day event in July resulted in more than double the number of pythons caught in 2020, reports Fox TV-35 News.

More than 600 people from 25 states participated in this year’s event, and the state already is preparing for the 2022 Python Challenge, says the FWC. The top prize of $10,000 was awarded to Charlie Dachton for the most invasive pythons removed. Dachton is a 61-year-old Southwest Ranches resident and a retired police officer who caught an amazing 41 pythons—more than five times as many as last year’s winner, who removed just eight snakes.

“They offered that big check this year,” Dachton said of the prize money. “That got my attention.”

Call, a middle school science teacher at the Florida School for the Deaf and Blind, said being deaf aided him in catching the big snake, since his other senses were sharper and helped give him an edge. Call said he was able to spot things average python hunters may overlook.

Read Next: The Python Hunt: Searching the Everglades for Giant, Invasive Constrictors

“We changed the time of year [of the Python Challenge],” Carli Segelson of the FWC told Fox5NY. “we used to do this in the winter which is also a really good time to remove pythons as they sun themselves … but in the summer participants were able to get out and actually get nests and get pythons before they hatch and spread out and disperse and breed and eventually create even more pythons.”

Burmese pythons are an invasive species threatening South Florida’s ecosystem, mostly in the Everglades. Pythons eat native birds, mammals, and other reptiles. The Florida Python Challenge helps address this threat by removing the snakes. Since 2000, more than 13,000 pythons have been caught in South Florida.