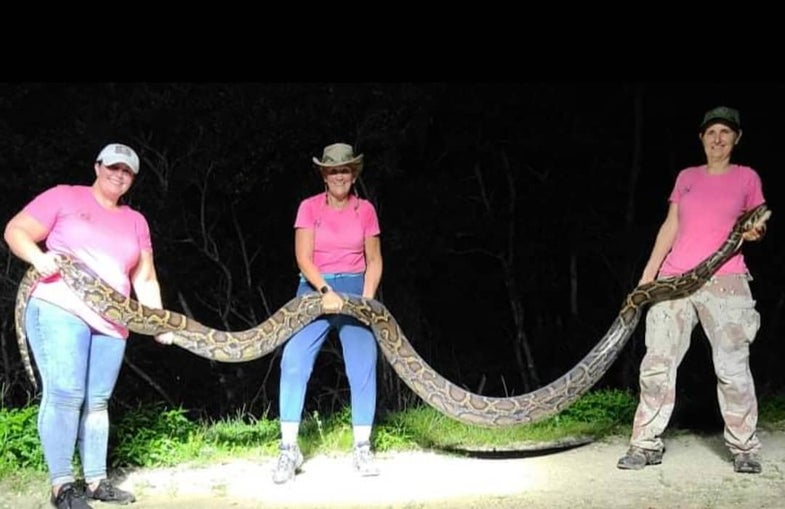 Donna Kallil and the Everglade Avengers with their giant python.
SHARE

Calling themselves the “Everglades Avengers,” the trio of women were able to handle and capture a powerful snake that Kalil told WPLG-TV in Miami she couldn’t collect alone.

The 91-pound serpent is a personal best for Kalil, who won a portion of this year’s recent Florida Wildlife Commission (FWC) “Python Challenge,” sponsored by the state.

Kalil won the “Challenge” division for most pythons caught by a professional, capturing 19 and pocketing $2,500.

Kalil prefers the title of “python elimination specialist” rather than python hunter. She wears a python-skin hat and her SUV has python-skin seat covers. Her daughter makes cookies using python eggs. She touts python cuisine, saying snakes are “a good white meat.”

“This has taken over my life,” Kalil told Flamingo Magazine about her python-catching obsession.

She caught snakes and lizards as a child, but sold Florida real estate in the 1980s. In 2017, she became the first female python hunter hired by the South Florida Water Management District.

Kalil is one of only a few people licensed to hunt pythons for the Florida water district and the FWC, giving her access to a variety of Florida’s land infested with pythons.