Dog-Sized Lizards are Taking Over in the Southern U.S.

As if the South didn’t have enough invasive species already, the Argentine black and white tegu is slowly starting to take root in national parks and neighborhoods 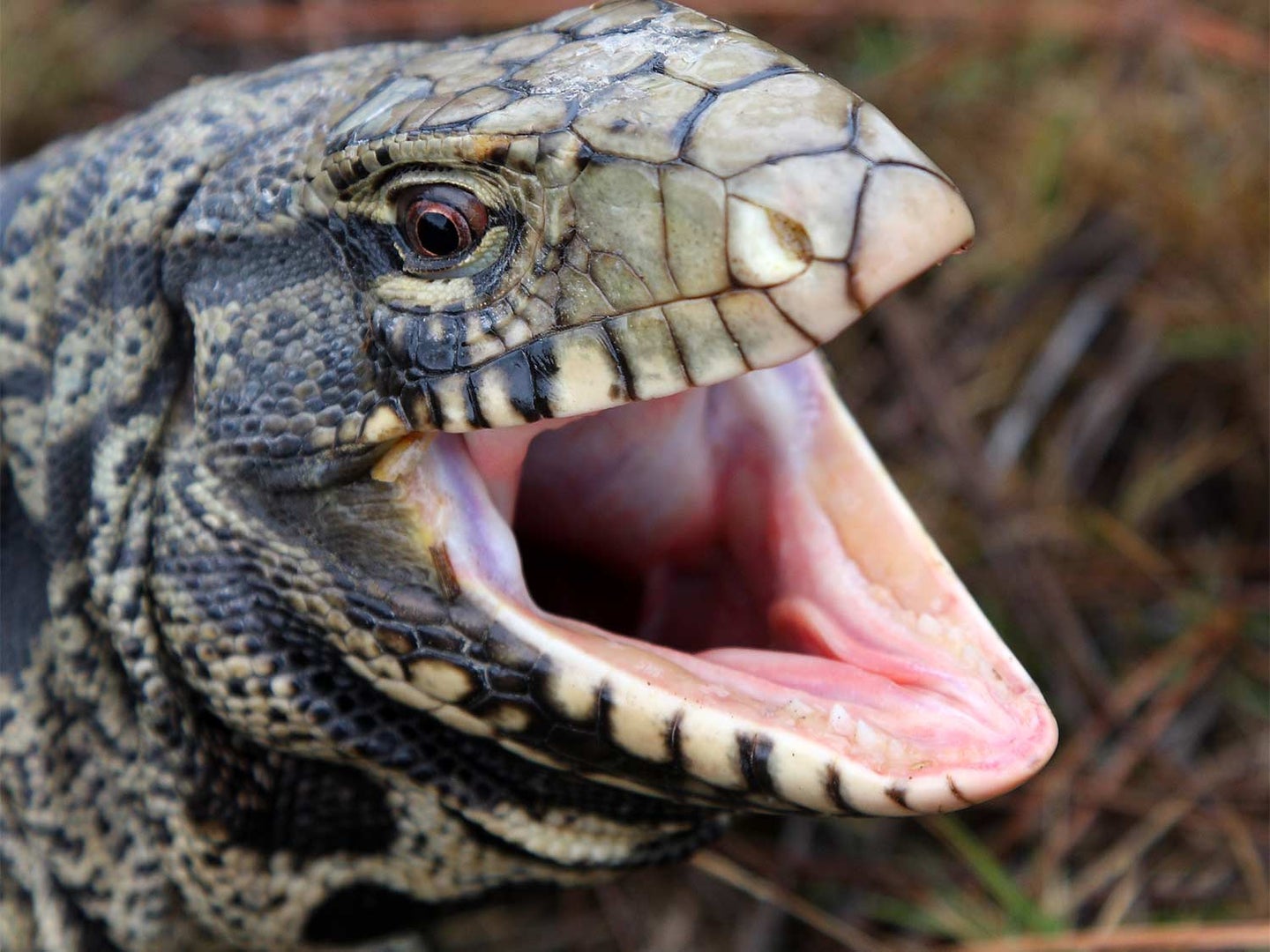 The Argentine tegu is running amuck in the South. Dustin Smith/ flickr.com/dsmiami
SHARE

Fast-moving, terrestrial lizards are slinking their way through the Southeast, invading national parks and possibly your backyard. Native to South America, the Argentine black and white tegu was introduced in South Florida through the pet trade. Since 2013, hundreds of tegus have been found after escaping captivity or being released by pet owners. Recent sightings in Georgia and South Carolina confirmed what biologists feared—Argentine black and white tegus are slowly but surely inching north, expanding their range.

“The whole southern part of the U.S. is at risk of tegu invasion,” says Amy Yackel Adams, a biologist with the U.S. Geological Survey, who is studying the animal.

Tegus have been bred and imported into the U.S. for decades. The intelligent and affectionate lizards are highly prized among reptile owners. Between 2000 and 2015, over 79,000 tegus were imported to the U.S.

Spreading Through the South

Everglades National Park is an attractive habitat for the reptile that hails from south of the equator. This year alone, 900 Argentine black and white tegus have been captured in USGS traps set near the park. Florida is notorious for its invasive reptiles, including the Burmese python, which were once imported as pets.

Tegus’ hefty consumption of eggs threatens the Everglades’ turtles and ground-nesting birds. Their presence has the potential to trigger an even greater rise in python populations.

“The Everglades are an internationally important hotspot of biodiversity. The national park has been greatly altered by the pythons,” says Yackel Adams. “The tegus could be a potential prey item for Burmese pythons in that system. That helps to increase the number of pythons because now they may be able to use that as prey source.”

Apart from established populations in south and central Florida, the reptiles have been spotted in two counties in Georgia and four in South Carolina. The spotted, scaled reptiles can grow to 4 feet long, the size of “a small alligator,” Georgia and South Carolina Department of Natural Resources officials say. Resourceful and evasive, it has proven difficult to control or reduce their spread once the species has been established. A healthy tegu can live 15 to 20 years and female tegus lay 30 eggs a year.

“[Tegus] undergo extreme hunting pressure in South America for their skin. That does not seem to really make a dent in their population, so that gives you a sense of how difficult their removal is once they are established,” Yackel Adams says.

Eggs of ground-nesting birds—including quail and turkey—and other reptiles are vulnerable to the voracious reptiles. In Georgia, tegus are targeting a billion-dollar industry by eating chicken eggs, says Sollenberger. Tegus are also destructive to gopher turtles, a keystone species in Georgia and Florida. The critical tortoises share their burrows with over 350 other species.

“We’ve done a lot of work to conserve gopher tortoises in Georgia. As [Argentine black and white tegus] expand and increase in abundance, it could become a problem for conservation,” Sollenberger says.

Can Tegus Be Stopped?

Florida legislators proposed a bill banning the importing, breeding, possession, and sale of black and white tegus for personal use but it was withdrawn following backlash from breeders in March 2020.

“Other states are considering this because they are tasked with protecting species that people care about for hunting and for biodiversity,” Yackel Adams says. “The last thing that state agencies need is the pressure of dealing with an invasive species that has all sorts of problematic consequences.”

Florida’s flourishing wild tegu population has pressured management practices to advance from eradication of the species to developing long-term management plans for the lizards. The state has recognized that tegus are here to stay and are trying to minimize ecological impact.

“If you get so many sightings, then you’re probably sitting on a widespread population. And at that point, eradicating them probably is not possible,” Yackel Adams says. “They’re definitely trapping and trying to contain the spread. But they’re in the management phase, and it’s really difficult.”

Georgia and South Carolina officials say their proactiveness may nip tegus’ spread in the bud. Since the first tegu sightings, the states have regarded the lizards as a serious conservation threat, and work to trap and identify populations.

“The thing that encourages me is that the states are reaching out to one another,” Yackel Adams said. “South Carolina Natural Resources was talking to Georgia. Those kinds of collaborations are going to be pretty essential for us to deal with conservation issues at this scale.”

The Georgia DNR recovered nine tegus in 2019 and six this year (dead and alive). South Carolina officials have documented 11 across the state. DNRs have implemented state awareness campaigns encouraging residents to report tegu sightings for removal. Like all non-native reptile species, tegus are not protected in Georgia, Florida, and South Carolina except by anti-cruelty law and can be humanely killed on private property with landowner permission.

State DNRs do encourage residents to send a photo of the suspected tegu before engaging to confirm that it’s the nonnative species. Unprovoked, they pose no threat to humans, says Sollenberger. But hunters and wranglers should proceed with caution.

“Their tails are really strong. Sometimes they’ll try to whip predators and things with their tail to ward them off. If you did try to grab one, and you weren’t careful, you could receive minor to moderate injury,” Sollenberger says.

The Georgia Reptile Society works to place abandoned tegus through its Tegu Task Force. Residents can submit photos of suspected tegus for identification. If identified, trained volunteers trap the animal and remove it to a rescue facility. All tegus captured have since been adopted, and members of a wait-list are anticipating future adoptions.

“The majority of people are responsible pet owners. It’s those few outliers that ruin it for everyone,” says Justyne Lobello, president of the Georgia Reptile Society. “Some people think that releasing your pet is a better alternative than getting it euthanized, which is not an alternative to me. Always call us to get it.”

Georgia and South Carolina DNRs do not find homes for tegus, fearing that a future owner may release the animals.

“All the ones we capture are euthanized, usually for research,” Sollenberger said. “The problem is that an owner wasn’t capable of taking care of them. [Rehoming the tegus] would just be kicking the can down the road a little bit.”

Once euthanized, lizard carcasses are used by the DNR’s partner laboratories to learn more about the creatures and how to prevent further spread.

“We are able to get a lot more useful data, know what they’re eating, what they’re doing, are they mature, and learning more about the animals that we’re finding here so we can make more informed decisions about what to do about them going forward,” says Andrew Grosse, state herpetologist for South Carolina Department of Natural Resources.

State and federal biologists are hopeful that community awareness and reporting of Argentine black and white tegus is the key to the species’ eradication. In the history of the U.S., there has only been one success story of invasive species eradication, says Yackel Adams. At the heart of it, “they had a really good citizen campaign.”

“The stories of [invasive species] being problematic are huge,” she said. “There’s one story of success and that happened on the northern island of Maui with the veiled chameleon. There, folks removed about 200 from the wild over time. And they kept at it. And they were diligent. Over the course of a decade, they were able to eradicate the veiled chameleon from Maui.”