In the Most Florida Press Conference Ever, Governor DeSantis Promotes This Year’s Python Challenge 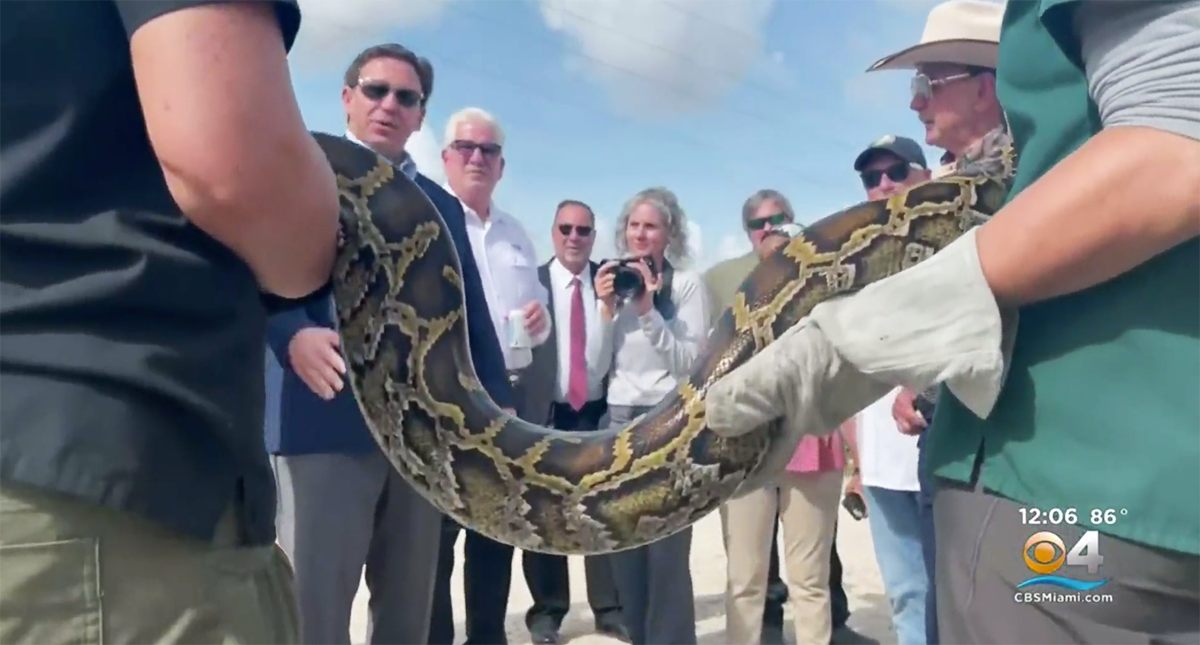 Governor Ron DeSantis held a press conference on Thursday that could only take place in the state of Florida. Standing near a live, 10-foot-long Burmese python, DeSantis announced the opening of the registration period for this year’s Florida Python Challenge. The event will begin at 8 a.m. on August 5 and end at 5 p.m. on August 14. It encourages members of the public to compete for thousands of dollars in prizes while removing as many of the snakes as possible from the Everglades.

“The Python Challenge allows the public to engage in direct, hands-on, Everglades restoration,” Governor DeSantis said during the press conference. “You can win prizes and, of course, you will be doing a public service.”

The Florida governor made the announcement in West Miami Dade, where he was surrounded by members of the public, researchers, and officials with the Florida Fish and Wildlife Commission. However, it was the massive python in attendance that caught most people’s attention.

In a video recorded by CBS-4 News, DeSantis approaches the snake and comments that “it’s not that big” compared to some Burmese pythons, which can reach lengths of 26 feet and weigh more than 200 pounds.

“This is the average size that people will catch in the Everglades,” one of the three snake handlers responds, nodding her head in agreement.

Anyone can participate in this year’s Python challenge, and cash prizes of $1,500 and $2,500 will be awarded to whoever catches the longest and the most pythons, respectively. All participants are required to take an online training. For those new to giant snake wrangling, FWC will host several in-person trainings in Fort Lauderdale between now and August.

Burmese pythons are native to southeast Asia, but they have been wreaking havoc in the Florida Everglades ever since the early 1990s, when irresponsible pet owners began releasing their unwanted snakes in the area. Since the species has no natural predators here in the United States, their population has exploded, with current estimates ranging from 30 thousand to 300 thousand snakes. They have gotten so abundant that it’s not uncommon to accidentally step on one of the slithering giants while moving through the Everglades.

Today, these invasive snakes continue to damage the unique wetland ecosystem and destroy the natural food chain. According to the United States Geological Survey’s estimations, they’ve contributed to nearly 90 percent declines in some native mammal species, including raccoons and opossums. And even though wildlife officials, registered python hunters, and members of the public have removed more than 16,000 pythons since 2000, their range continues to expand further north.

Read Next: Watch: Bobcat Fights a Python, Steals Its Eggs

Outdoor Life recently reported on the first recorded evidence of a bobcat preying on python eggs. This was a major discovery because it provided a sliver of hope that native species in the Everglades might eventually restore some semblance of balance to the ecosystem.

Over the past few years, Florida has declared pythons an enemy of the public, using various programs to exterminate the reptilian vermin, including python sniffing dogs and the Python Elimination Program, which pays registered “python removal agents” to kill the snakes year-round. The state’s annual Python Challenge is yet another strategy that encourages public involvement and incentivizes the removal of Burmese pythons.

“The Everglades is one of the world’s most prized natural resources, and we have invested record funding for Everglades restoration projects, including record funding for removal of invasive Burmese pythons, which wreak havoc on the ecosystem,” Governor DeSantis said Thursday. “I am proud of the progress we’ve made, and I look forward to seeing the results of this year’s Python Challenge.”